Roughly a month later, data in Israel looks like this:

The United Arab Emirates will overtake Israel in about a week becoming the new leader in this race (when ignoring countries with a pop. under 1m).
They don't seem to be slowing down at all.

USA and Europe are both declining, going the right way albeit slowly

Denmark rose a little bit, the rest is either holding steady or declining.

Japan is still rising and South Africa is starting to climb as well. Deaths in India should start declining next week.

Got a little lucky today. Both me and my wife got our first shot with Biontech.

I'm not part of any priority group so I'm quite happy.
Shout out to the two people who couldn't make it today so we could get the shots instead.

I got Pfizer today. They ramped up the scale here, doing about 2 to 4 per minute where I went. All very organized, different halls for registration, vaccination and sitting area, 15 minute wait before checking out. 8 check in stations, 15 vaccination stations, 2 checkout stations. Maybe more as some people got send to a different part of the building.

On the way back, my music started to sound a lot better, clouds were glowing, pink elephants dancing along the road. Nah, no effect but it's only been an hour. The tetanus shot had more effect right after. Follow up shot is in September, they're trying to get a first dose to everyone by then end of summer.

GF got the vaccine here today. Not our age group still but she has juvenile arthritis so yeah. Surprisingly there's actually not a lot of people showing up during the comorbidities stage to get their shots so I hope they continue age-based vaccination soon.

Cases in Europe and the USA are going down at a good pace, oddly deaths are not going down as fast in the USA

Bunching up together, not in any hurry to get rid of the virus.

As long as the vaccines work, those that want to get rid of it will get that option sooner or later. However vaccination rates in the USA are already dropping sharply, while just under half of the population has received their first shot so far 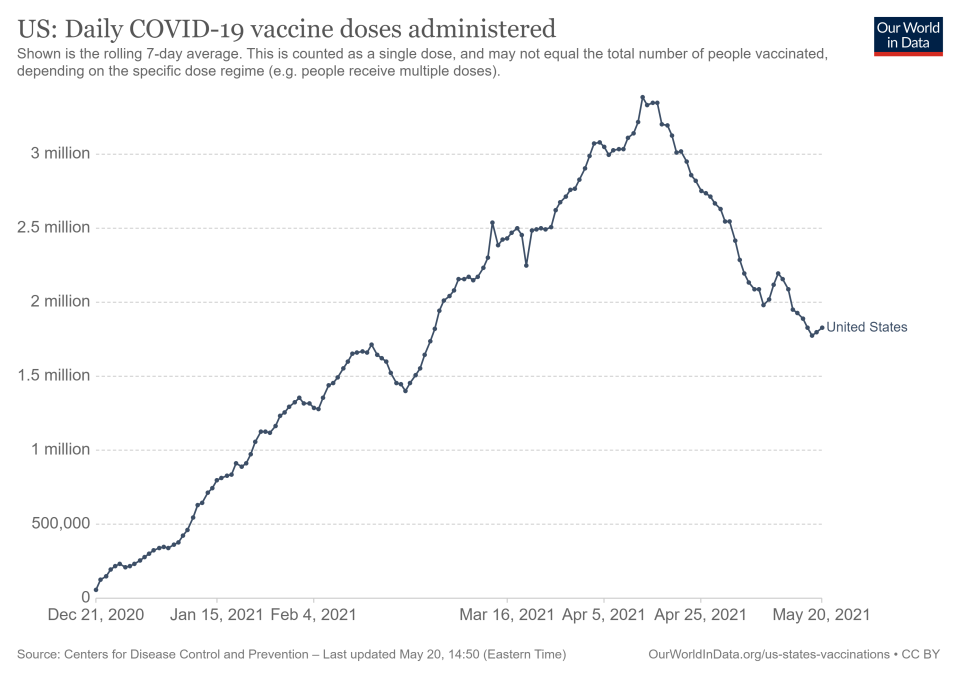 Canada just overtook the USA when it comes to administering first doses (far behind when it comes to second doses though) after a record Thursday, 158,524 vacinations in Ontario in a single day. Target is end of June to get a first dose to all eligible, but I expect we'll soon run into the same problem, people not showing up / not willing to get the vaccine.

Got my second shot of Pfizer on Tuesday had pretty much no side effects with either dose. Barely felt the first injection and only slightly felt the second injection.

Same here, I noticed some discomfort in my left arm (where the shot went) the next day, but nothing else. Nothing like the sore arm I got from Tetanus shot.

I went cycling today, went past the fairgrounds where the vaccinations are done here, long long line-up. People are getting there shots! (But really should show up at the appointed time lol) A lot of things re-opened today (flip flip government, last week it was still a 2 week extension until June 2nd) due to the nice weather. It was very busy down town. May 24 weekend, Monday is Victoria day. We'll see in two weeks if we jumped the gun again. Over 50% has gotten their first dose now, however vaccinations have massively ramped up in the past couple weeks so a lot of those are still vulnerable this long weekend.

Got my Sinovac shot on thursday here in chile, I'm 30 and it was my turn, I'm feeling a little sick but I was already like this before from a cold so I don't know if the vaccine has to do with anything. We should get to 26 year olds by next week with at least the first dose

Where I live (North Texas) there has been more supply then demand for the COVID vaccine since late April already. Didn't have to wait for either of my shots.