I said one hint for 24 hours then I would reveal but I would really like these games to be guessed eh.

2- Imagine that your religion brought disaster the world, ending the modern world as we knew it.

This disaster is actually a living being.

1- 100+ hours of grinding experience! Finally I can start grinding for items now!

Or you can start another race and class to level up again.

This has to be Final Fantasy X right??

I had a big post typed up and lost it, so this is much shorter than I'd have liked ;o; 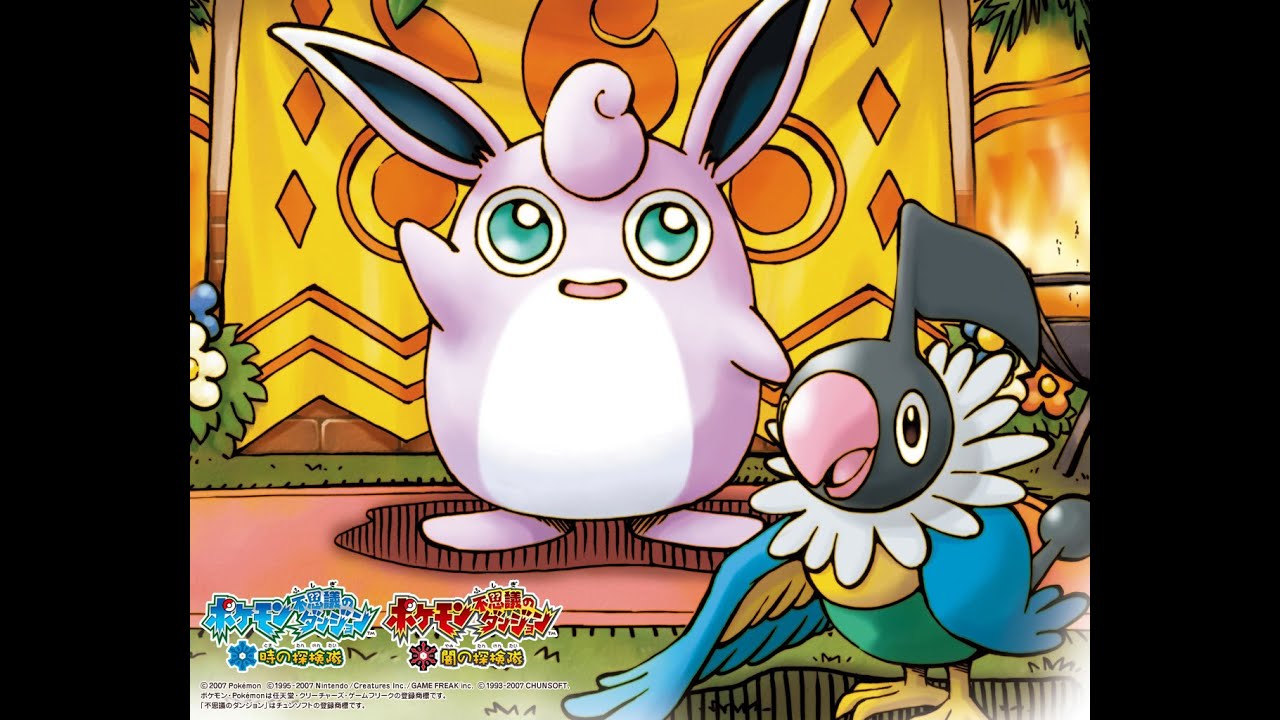 Pokemon Mystery Dungeon: Explorers, are the most beautiful games ever made.

They are a grand tale of adventure, perseverance in the face of adversity, personal growth, and doing the right thing in the face of all opposition. As you make your way in a new world, fit into a guild, and eventually get dragged into a conflict that threatens the very fabric of the universe itself.

Their gameplay is incredible, you traverse mystery dungeons, battling and collecting treasure along your way, and also recruiting new members to your team.

The characters and story are where the game truly shines.

The villains all have firm defined objectives, and are easily the darkest characters Pokemon has ever seen. They straight up threaten to kill you, and even attempt to execute you.

Grovyle is the best character in any Pokemon game. It's a strong individual that never gives up in the face of all the obstacles thrown in its way, and always fights for what it believes to be justified.

The guild members themselves are fantastic as well. At first they all appear to be very simple characters, but through dialogue, their development across the game is incredible. My personal favourite is Bidoof, who is a newbie much like yourself, and is depicted as being clumsy and unsure in themself. Over the course of the game, they grow and become a strong asset to the guild.

Much like DQXI S, PMD: Explorers of Sky introduced a plethora of new content to the already fantastic Time/Darkness by way of character episodes that explored guild members' backstories in detail. Bidoof's shows that more than anything - your own perseverance will get you where you want to go in life.

The artstyle is timeless, and they remain the most beautiful looking Pokemon games today. Their soundtrack as well, is absolutely breathtaking - more than 5 hours of masterpiece after masterpiece that sets the atmosphere of every moment throughout the game incredibly well.

If I could give this equal first, I would. If I had played through this year, it would almost certainly still be there in the #1 spot. This is an utterly breathtaking masterpiece of a game that deserves a playthrough from anybody.

I pledge a Sega gaming urinal to anyone who can guess my top pick.

The hint you get: it's a visual novel from this decade. 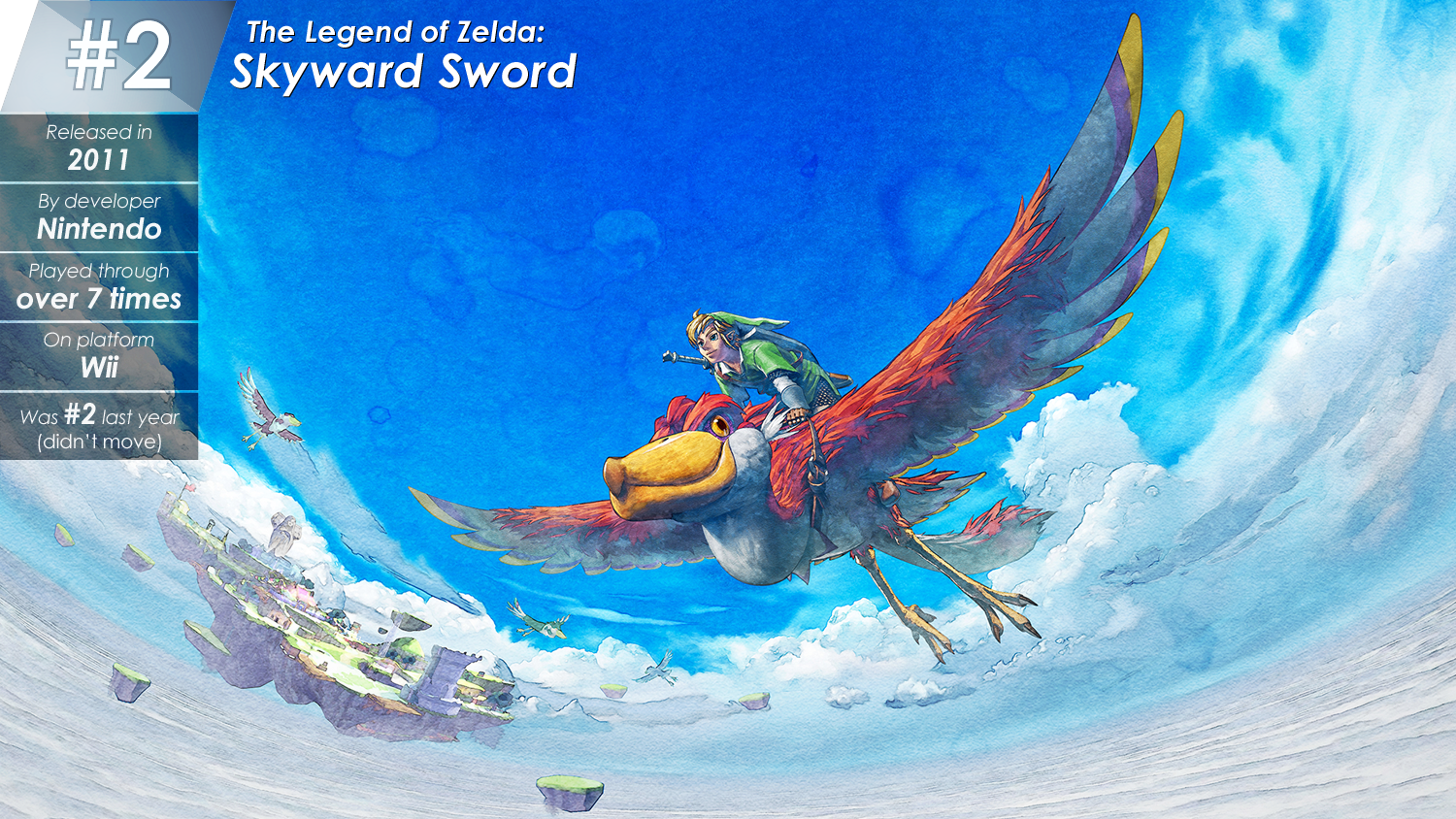 Hey, look, it's my favorite game ever! Wait, no, it's not? It's the second time this happened? Um, this is awkward... So, um, I guess this is Skyward Sword's life now. It's gotta settle for being only my second favorite game ever, the poor guy.

Seriously, this game is awesome, but you all know why and most of you will always disagree anyway. It's got a gorgeous story, an awesome soundtrack, pretty graphics, great gameplay, out-of-this-world level design, good bosses and actually great sidequests. It's got everything you'd want in a fantastic game, and everything you'd want from a fantastic Zelda game, except for interesting open-ended exploration... It's funny, because most of the Zelda games only trick you into thinking you're exploring, while still keeping things very linear and guided. Skyward Sword is the only one that fully admits to its own linearity, though, and that is apparently it is inconceivable for a Zelda game to be linear, oh no.

I'm gonna be honest, though... I'd like to believe this isn't true, but I feel like I have a tendency to like things that get plenty of haters. My favorite movie has loads of haters. My favorite Pokémon game is despised by its fanbase. Skyward Sword has a dark reputation among Zelda fans, too... I guess it just is how it is. Obviously I don't choose things to like when I see people dislike them, but it almost feels like it adds to the enjoyment for me when I do get into it, because it starts feeling more personal, like this is "my" game and not everyone's. Psychology exists, I think.

I replayed Skyward Sword again this year, and loved it. It's a shame we haven't heard anything on a Switch port, though, because for as amazing as this game is, I can't help but wish they'd improve a couple things about it. 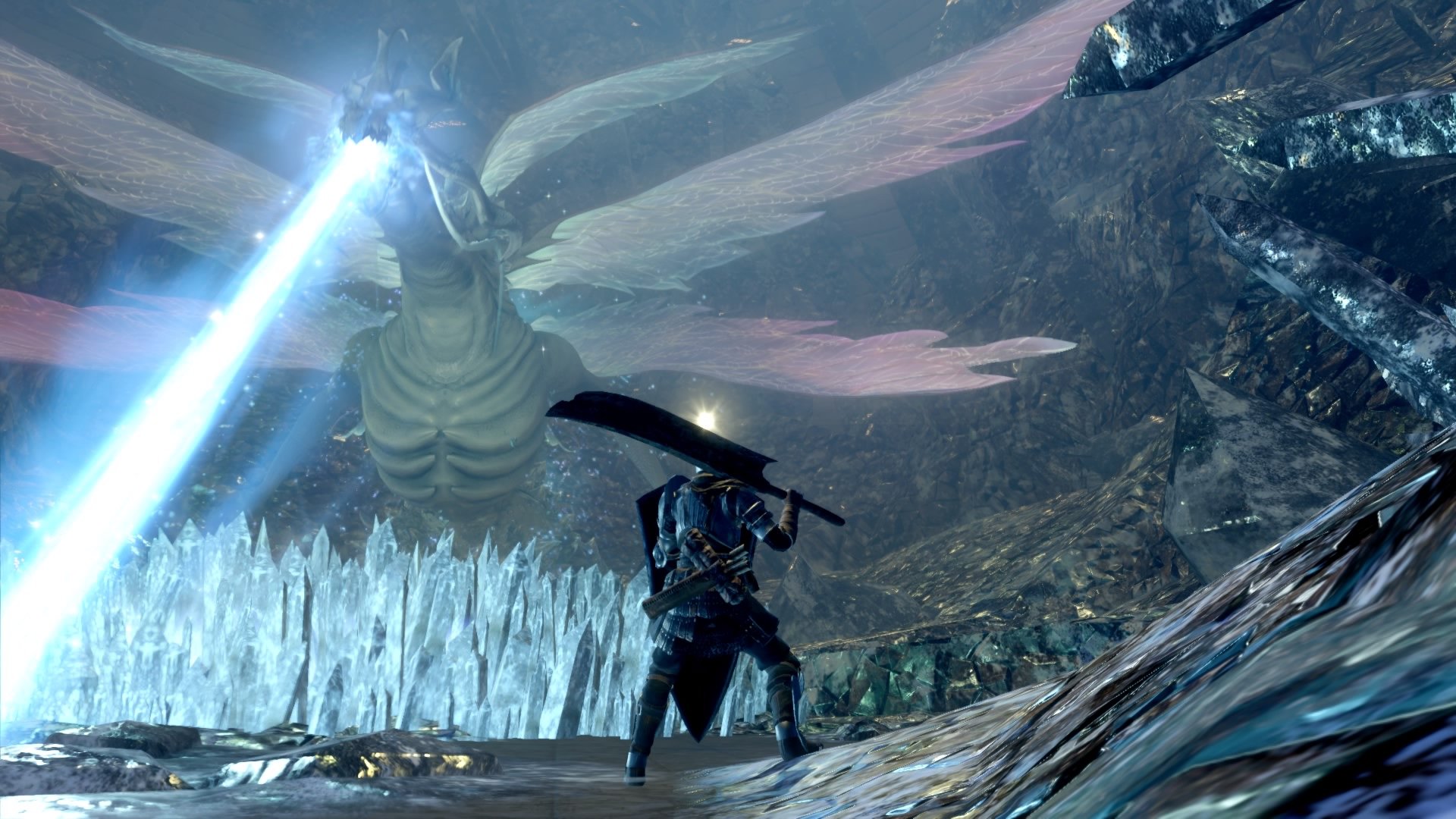 There are very few games that have ever had quite as strong an impact on me as Dark Souls did when its greatness finally clicked in my head. The game has a sense of hopeless determination running through it in ways that I had never before seen anywhere else, but it takes a while before you even really begin to notice it. When the game starts it's just a difficult fantasy RPG, but the further into the game you get and discover the history of Lordran, meeting the people still somehow clinging to existence among its desolate ruins and encountering the remnants of a kingdom long gone, the more you begin to realize that there's something truly special about this game.

To me, Dark Souls is the best game of the 2010s, and the series as a whole is now second only to Final Fantasy in my rankings of the greatest video game franchises ever. These are definitely games that won't appeal to everyone, but once you get them, there's just no turning back anymore. The world, lore, gameplay, music, visual design, and everything else is just impeccable, with care and thought placed into each element that most other games will never see. The only real blemish is one late-game location and boss with which FromSoftware simply ran out of time, and had to just put something halfway decent together. Besides that, however, I love everything about this game.

1- 100+ hours of grinding experience! Finally I can start grinding for items now!

Or you can start another race and class to level up again.

Despite some strong contenders, this game has still defined the MMORPG genre 15+ years later.