Anyway report is in:

Gamestop stock down with more than 15% after hours on poor financial results. The company reported a net loss of $415m during the quarter. 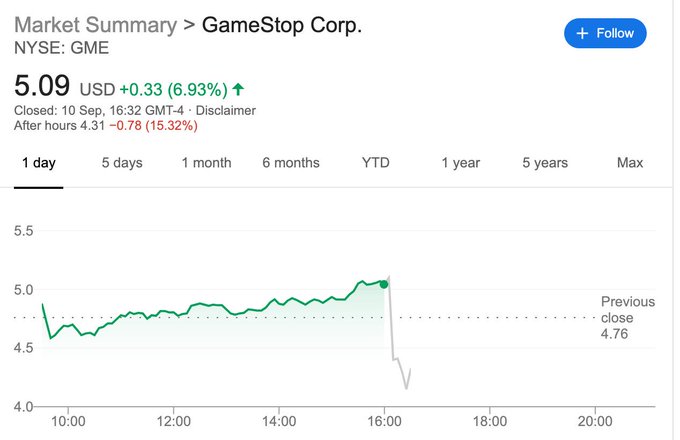 What are consoles if not computers? Even if consoles used the exact same OS and hardware it would still not be possible to run games on different consoles because specifically DRM. It's a great umbrella term of an abuse of power that extends their reach beyond to where it should be. The intention of curbing copyright infringement is not the only thing it's being used as. It's all about control of content.

When we see specifics about next generation consoles, and the extent to which they're going to try to push people into digital, we'll have a better sense of GameStop's medium-term prospects. if the hardware guys are going to look at the relative insignificance of the all digital Xbox, and not offer all digital versions of the new consoles next year, that will be a good sign for GameStop. But, if either Microsoft or Sony offer a diskless version of their new consoles at launch, I think that will be a very negative sign for GameStop.

really, the fact that the Xbox one s all digital edition has not made much noise is a good sign for GameStop already. I don't think it changes the long-term picture, as it is clear that physical is going to continue to decline in it's percentage of software sales. But, the slower things move in that direction, the longer GameStop has to adjust. A healthy, physical software sales start to the next generation very well may buy GameStop the time they need to get exit leases as they expireu, and otherwise reign in costs. They'll have to adjust to a much smaller footprint, and probably a smaller share of the gaming market in general. But, there may be room for a scaled-back GameStop in the long-term gaming industry picture.

Sucks for the next time I need to buy a somewhat old used game. Gamestop usually has the best prices for that.

Their stock dropped even further down to $4.40 a share.