One of the guys commenting on Tekken finals clearly knew about it. He even said when the other asked (probably knew too): that is for the people here.

Looks Smash time, since not is the PS4 sponsor logo not there, but of course its playing the main theme of Ultimate. Should be an awesome top 8 considering all of the crazy shit that went down last night.

Btw, since Arcsys had two different announcements several hours apart (First for Blazblue Cross Tag, and then Guilty Gear), it's not impossible that Harada will get back on stage again when EVO is about to end.
If not, someone at EVO needs to explain what that codec thing was.

The only issue I have with that is due to the final game being Smash, you would think the final reveal would be a new Smash character, granted Hero just release and Banjo aint out yet. But that just feels weird pacing wise in terms of reveals, then again I thought it was strange that we only just saw Guilty Gear instead after Blazblue was done.

Then again I have a personal theory that a Bandai Namco rep is one of the DLC characters for Smash since only got 1 rep despite being the co-developer. So it is possible for say that a Tekken rep joins Smash, while a Smash character being Snake joins Tekken in a pretty cool back to back. 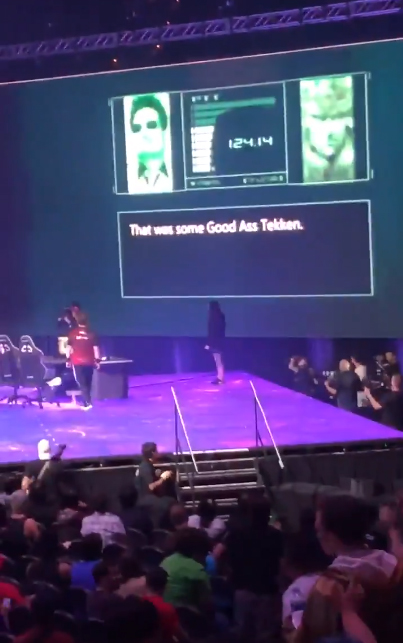 Well that is Harada next to Snake, so it has to be something official from Namco.
Maybe it was an intentional tease, and they won't announce the Metal Gear character for a few months.

It doesn't have to be Snake, but I think it would be. MGS4/Revengence Raiden would be cool as well, but more suited for Soul Calibur 6.

Joker is so fucking broken. Disgusting.