Let's remember this isn't just a matter of PS1 vs N64; the Saturn is also in the equation as another example of the "sharper but more jagged/jittery" look.

Yes, the first post pointed out that the N64 had blurry games but it doesn't go into details for the reasons beyond that ...

No one mentioned anything about the "texture cache" or it's "vaseline AA implementation" in the first 20 posts as far as I can see ...

Just about at least a quarter of the posts in this directly mentioned the upsides of N64's hardware and it wasn't until maybe after 40 posts that we saw other criticism against it aside from mine ? Heck, the Sega Saturn in here just got as many criticisms as the N64 did and this thread isn't even about that system!

Due to the general blurriness (and rather short draw distances), I prefer what the PS1 generally put out. Out of these two shots however, Zelda wins, haha.

In the end, the best style is here:

Music, details, cutscenes, all go to PS1 (I never played Saturn). PS1 even had more content 99% of the time. Hell, games like Gex2 even had better draw distances over their foggy counterparts. To me, N64 games just had "weight" to them.

PS1 and Saturn felt more jittery because they didn't have floating point units. So all math was fixed point, meaning lesser precision.

Not everyone has an understanding of how hardware works.
It's also easy to look back at old systems with fond memories and it's not until you go back and revisit those games that you realize how poorly they have aged.

Definitely Audio, that was a massive advantage for the Playstation 1.
Not only could it play back CD audio music... But the console even had a mighty fine audio chip, ironically the chip was the successor to the Audio chip found in the SNES, which for it's time was also a mighty fine chip.

The Nintendo 64 felt like a step back from the SNES in many aspects on the audio front and had to use more CPU cycles to boot.

Doesn't mean there wasn't some great audio on the N64 though... Conker and Perfect Dark were pretty memorable.

Who cares? Many people pointed out the visual perceived differences without getting into the technical nitty gritty details.

The PC ended up getting many PS1 ports (I.E. Final Fantasy) but the PS1 ports on PC looked like a pretty big step up over your average N64 titles, especially when operating under 3dfx Glide... And especially at high resolutions. (You could have had 1080P back in 1995 for instance! Although older voodoo cards were resolution limited.) 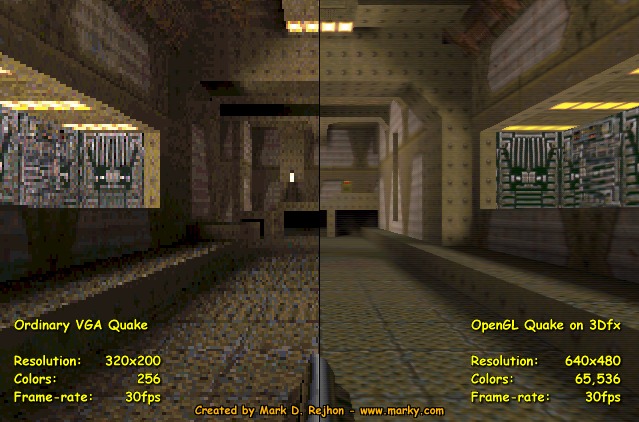 But yeah, late 90's/early 2000's the PC was doing allot of "experimenting" with games... We had one of the best games of all time, Sacrifice, we had Black and White, Giants: Citizens Kabuto, Battlezone 2, Dark Reign 2, Homeworld... List goes on, was definitely a "golden age". - But far from being "early 3D" as the Geforce GPU was on the minds of PC gamers at that point rather than TNT, Rage, Virge, Verite or Voodoo. etc'.

But the early era of 3D Graphics on PC was happening around 1996 with the advent of "Quake" and when running on a Rendition GPU, it had improved lighting, bilinear filtering, 16-bit colour, dynamic lighting, anti-aliasing was an amazing experience.

Yeah, honestly the ps1/N64 generation has aged the worst out of all generations, IMHO.

The thread is about the Saturn. It's about all three of the major 5th gen systems.

Yes, I remember the first wave of 3D chipsets, but they still were harder to set up, and SW support had to be quite explicit and while present on most big games, it was very far from widespread, GeForce was the first to make HW 3D very user and dev friendly, and GeFo 2 MX the first to make it mainstream too. Previous chips like TNT and Rage (I had one and i was angry for years with ATI for not fulfilling its promise of OpenGL drivers for Win 9x too, they made NT ones only, and NT back then offered very scarce compatibility with games) were sometimes hyped as "3D", but without additional cards like the 3DFX, they offered only some final layers of the 3D pipeline, but not the geometric transformations ones. Back then, though, Quake I and II and even more Heretic II and MDK were able to do wonders even with the SW 3D engine, as long as we accepted to stay within 800x600 res, while with Duron and GeFo 2 MX I was able to push them to 1024x768 or even 1152x864, and with better framerate too.