I'm fine with that.

...Actually, I'm fine with all of this. I'm just not sure if other people are.

Would it be possible to have two different colors for the thick fat line on the front page than only the yellow one that we can distinguish between a thread with a poll and one with a bet?

Thank you for all your work!

What color should it be? LOL!!! I suck with graphical stuff, so if you allow me to choose it, you're all screwed.

Green signals that you can vote without having to worry about consequences, yellow signals potential danger. Makes perfect sense.

EDIT: After looking at the frontpage, there are already green icons for threads with no new posts, so green for polls might not be ideal, particularly when polls get added to a thread after they were first made. Blue would stick out more.

Thank you for the implementation. Since I am not better with graphical stuff than you, just do as you feel.

So, after some time I want to reflect on this feature a bit more.

To test it, I made my own bet thread about Fire Emblem. As this is run for some time, I have first results on how the number of participants and the betted amount differ: 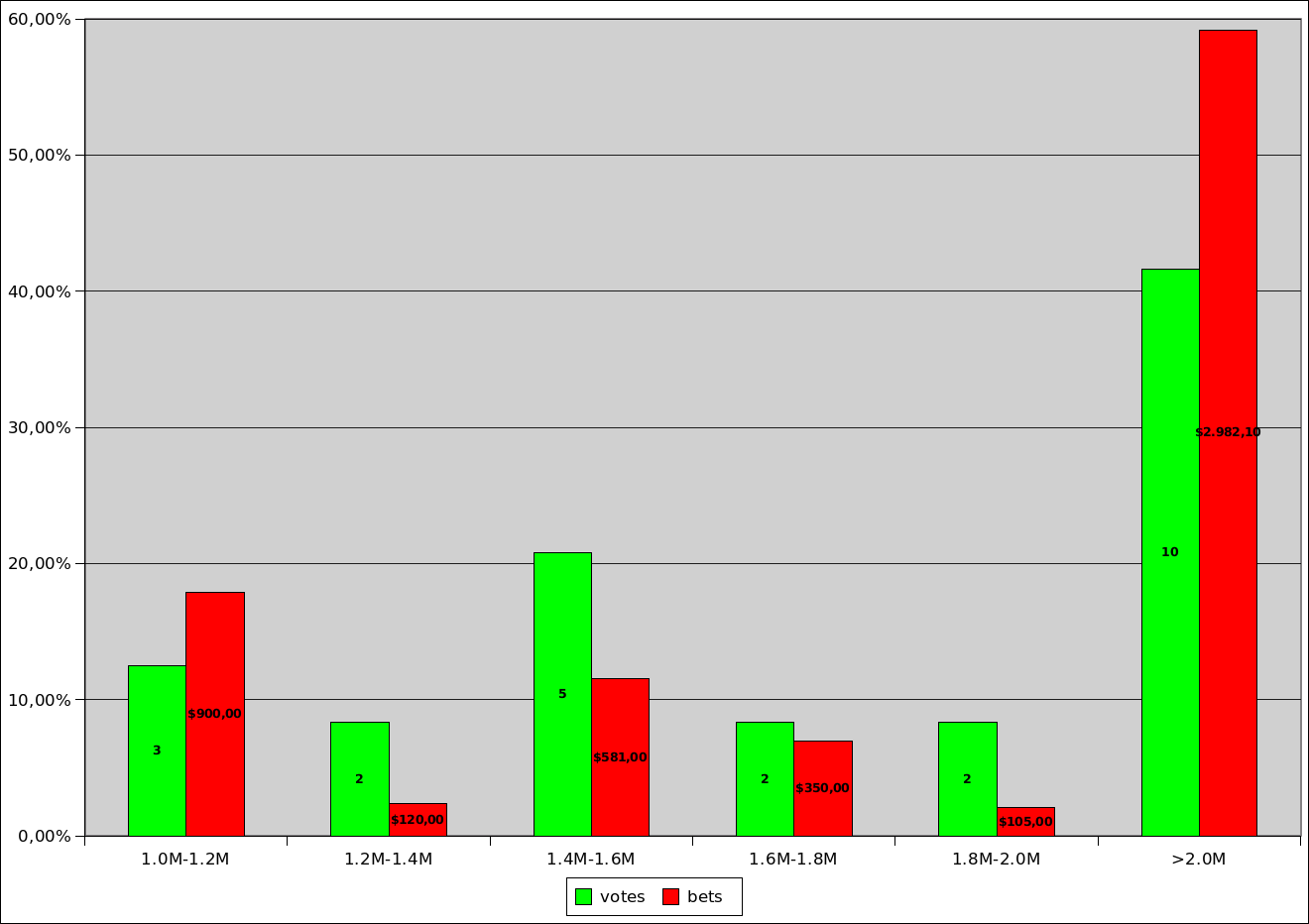 First of all, I was underestimating how bullish the VGC-community is on the prospects of this. I should've extended the options past 2M. But secondly about the differences: This is what I hoped for. For instance, more people betted on 1.4M-1.6M than 1.0M-1.2M, but betted a lower amount of VG$ overall. This is interesting.

This brings me to my first point of possible expansions/improvements I propose to @TalonMan (sorry to propose even more work for you):

1. Would it be possible to show the percentage of bet-amounts instead of participants (in my above graph the red instead of the green bars) and use that for the graph too. Well showing both would be even better, but is probably more work.

This brings me to another point. In the above graph I chose bar charts, because I wanted to compare percentage of participants with percentage of bets. But generally I think for a breakdown of 100% into parts a pie chart is a better visualization than a bar chart. So I propose:

2. For both polls and bets the breakdown should be visualized in a pie-chart.

I understand it is easier to make a bar-chart with HTML. For pie-charts trickery with canvas is needed or a tool that generates the graphic for the graph in the background. So this is probably something for the long-term, but I think it would be a better way to convey the result.

Next is the payout. As I understand it currently the ones that chose the right option get 150% of their bet and everyone else goes empty-handed. But not all bets are similar. For instance your bet in this thread and the one Kirby made are easy if you read past posts. That is why in both cases over 90% of the bet amount is on one option. Even the joking bets on other options are made without high stakes. In my thread though the majority thinks it will break two million (as I said I was too conservative with the options), but still it is only about 60% of the bets. In more difficult bets the differences might be even lower.

Obviously the number of options play into this. So in a bet with two options 50% seem to be OK, while in a wager with 10 options (like mine about Fire Emblem) an option getting more than 50% of the bet-amounts indicates an easy bet. So my third proposal:

3. Scale the payout depending on the percentage of betted amounts. Bets that looked too rigged (like 100% for one option) could even pay out less than 100%.

As an example. I would say if an option get's 100% of the amount betted, it obviously was way too easy. So the payout may only be say 90%. On the other hand the full payout of 150% should only be for option that look seriously difficult. So the expected breakdown of bets for two options would be 50% for each, for three options 33.33% for each, for ten options 10% for each. I would say the full payout is if the option got this percentage of bets or even less. Something like this. So for my bet if FE really ships more than 2 million in the first quarter, the payout should be a lot less than 150% for the winners, but if it is another option, the payout is much higher, in many cases (for example 1.2M-1.4M) the maximum amount of 150%.

4. Next idea is some funny punishment for the losers. It is said the losers of a bet have to eat crow. What if the avatar of losers of a bet is switched for a limited time with a picture of a crow. There are a lot of crows in video-games to chose from, it could be a random one.

Well, that was some random stuff I thought of in regards to the implementation. Thanks again for your work Talon, these ideas aren't meant as critique of your work, but as ideas for possible extensions in the future.

Yeah, but in your rigged bet was no real risk involved.