In the end, I'm personally just happy that Game of Thrones was made in the first place. It was an incredibly ambitious undertaking, and even during a time period where we're constantly being bombarded by quality entertainment from all fronts, GoT stood out in the best way. Regardless of how everyone feels about how they wrapped it up - and I certainly have my issues with some of their execution, and pacing - I think we can all agree that we got some of the best seasons of television along the way. It's legacy, in my mind at least, is an overwhelmingly positive one, and hopefully it'll inspire more projects in it's vein.

At least we know Edmure Tully is still around.

I've had a few days to process now, so these are my opinions on the final season of GoT overall:

-Almost all of my favorite characters survived the whole series. Arya, Jon, Bronn, Tyrion, Brienne, Sam, Gilly, Davos. When I started the series about a month and a half ago, I started with the knowledge that Game of Thrones was a series that killed alot of characters, and I fully expected some character death to affect me so much that I would quit watching the show, which is what happened with 2 other shows known for their character deaths, Lost and The Walking Dead, both I quit watching after favorite characters died. However, in spite of my fears, that never happened in Game of Thrones, over the course of the whole show I only lost a few characters that I liked alot, certainly no deaths major enough to cause me to quit watching the show. I hate cheap knee-jerk deaths, and the earlier seasons had alot of them, I'm glad that D&D mostly got rid of them in the last few seasons.

-The character arcs for the main characters were all wrapped up satisfactorily in my opinion. I was glad that my suspicions about Dany from way back in season 1 were confirmed in the end, I knew she would become a villain all along. Jaime and Cersei's arc ended exactly the way I expected it would, I knew that his love for her couldn't be stopped and that he would eventually die with her. Jon's arc ended not the way that I expected, but the way that I hoped it would, I knew that he didn't want to rule and would rather return north to live with the free peoples, and he got his wish in the end. Arya, ever the adventurer, had her arc end by setting sail for adventure, searching for a new continent to the west. Tyrion got to become hand of the king, the one thing he was shown to be best at in season 2 and 3. Bronn, after seasons of broken promises about riches, titles, and castles from the Lannisters, finally got the lordship and riches he wanted. Sam, the most unlikely of heroes, not only survived the show, but got to become a Maester, a role he was always well suited for. Davos Seawoth lived up to his name by becoming the Master of Ships on the small council.

-The music was great.

-The epilogue sequences were really well done, I especially liked the small council scene, it brought such a big smile to my face.

-The cinematography was hit and miss this season. It was dreadful in episode 3, the entire battle against the Night King was so dark that it was hard to see what was happening. However, they also managed to pull off fantastic shots like this:

Say whatever you want about #GameOfThrones but this shot is amazing! pic.twitter.com/CX5BfxcZ55

-Poor shooting location choices. Why does King's Landing look so different from earlier seasons, with a giant desert field in front of the walls? Why are their deciduous trees with leaves on them in Kings Landing in the middle of the long winter?

-The unanswered questions. Where the heck was Gilly in the finale? Did Sam and her get married, and if so, how, Maesters swear a vow of celibacy. Did Bran change that law? How did they rebuild King's Landing after the massive damage Dany wrought? The 2 richest houses in Westeros were the Lannisters and the Tyrells, Lannister Gold mines ran dry and Cersei spent all of the Tyrell gold on Mercenaries. Maesters were saying that the winter would be one of the longest ever, and their were concerns about starvation in earlier seasons, with food being stockpiled in Kings Landing to last the winter, but surely Dany's attack would have destroyed those food stores, how did they last a further 5+ years of winter with minimal food?

-The Night King. This dude was supposed to be a big threat, but he died like a total chump, without even a proper 1v1 fight scene. He never spoke, we learned nothing about his backstory except that the children of the forest created him.

-The low number of climactic 1v1 battles. We got 2 the whole season, Jaime vs Euron and The Hound vs The Mountain. It's pretty lame that Jon, Arya, and Brienne went through the whole final season without proper 1v1 battles. At the very least Arya should have got one against the Night King instead of killing him almost instantly.

-Too short. Even though the last 4 episodes this season were roughly 20 minutes longer than prior episodes in the show, the last season still felt rushed due to having only 6 episodes. I feel like they should have gone with 8 episodes instead of 6, to give them more time to wrap everything up, to make the Night King a bigger threat that lasted multiple episodes, and to make Dany's fall to darkness a bit more gradual than it was.

Great post and I agree! I bet most viewers had issues with last couple of seasons but they did wrap the thing up in 8 years. That's something the author hasn't been able to do in two decades. We can only hope he'll eventually finish his work but he seems to have many other projects as well.

At least we could/can enjoy this epic adaption of the story in the meantime. I'm already watching it again.

Felt sorry for the dude,too kind(and clumsy) to be caught up in the Game of thrones. :p

Spoiler!
My heart broke from the look Deanerys gave Jon when he stabbed her.

Someone correct me if I'm wrong on this one, but isn't Bran as the 3-eyed Raven immortal or at least long-lived?

The last 3-eyed Raven was ridiculously old, or was that the Weirwood tree sustaining him?

Is Bran potentially going to be King for generations? 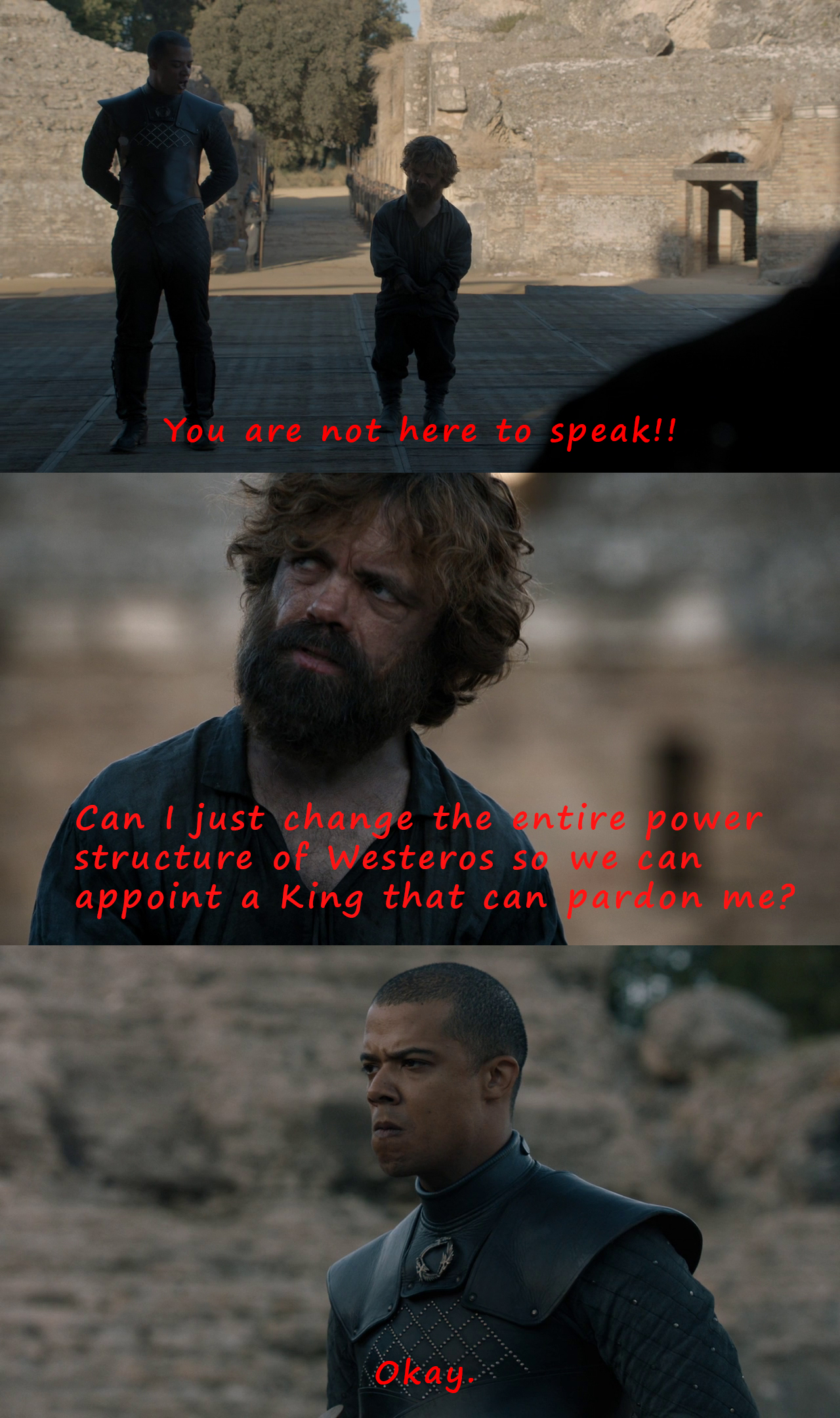 Emilia Clarke is so cute in that clip. Poor girl didn't know what to say.

I didn't watch the TV series so I just found out what happened.  I did read the books up through A Feast for Crows, though.  Part of the reason I dropped it was because the books simply take too long for such complicated material and I got tired of reading earlier books over just to remember what was even happening.  The other part of the reason I dropped the series was because I came to hate Daenerys and the chapters devoted to her.  It was like being forced to read a much lamer book wedged in with a book I was really enjoying.  There were characters and narratives I liked less than others but hers was the only one that I just wanted to skip.