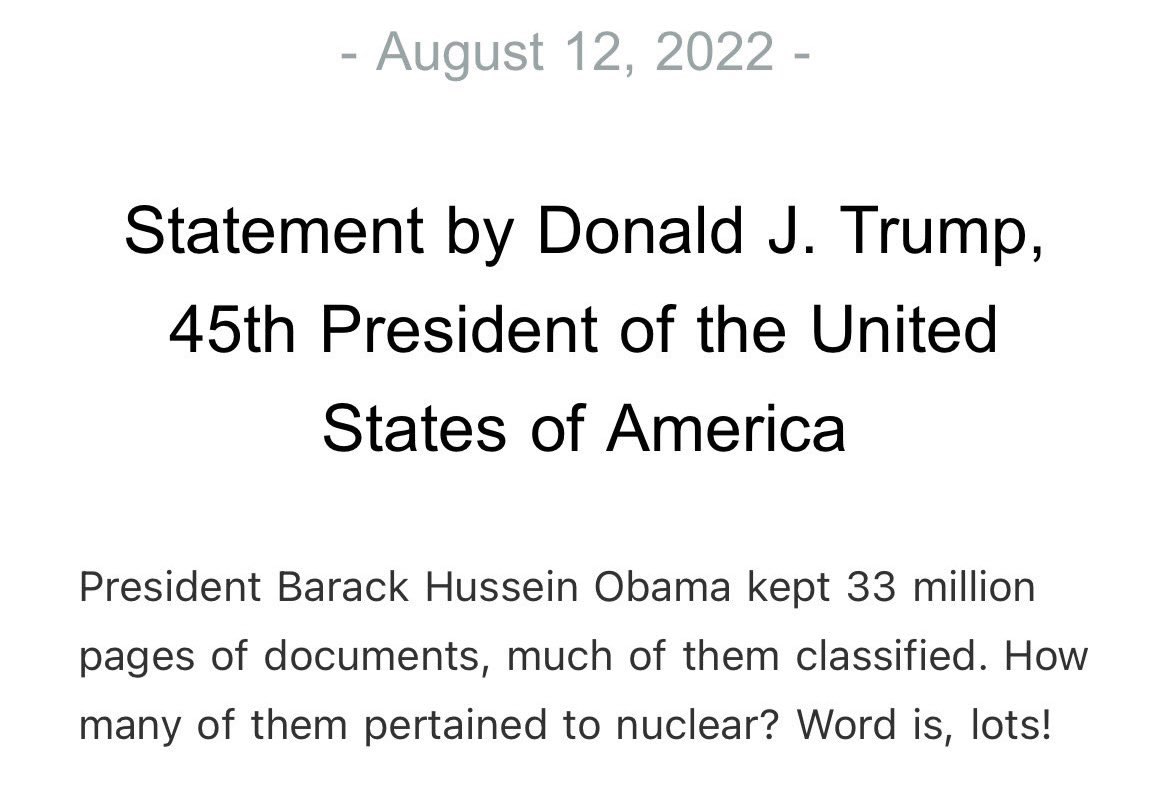 They're really doing what-about-ism for nuclear documents.
And he had to throw that Hussein in there of course, for the "true patriots". ;)

That makes it sound pretty certain that the FBI did find documents pertaining to nukes.
So Donald will have to explain why he didn't hand those over the first time the government came to collect the classified documents in June.

If it was just that he was embarrassed to be caught with these in particular, he could have destroyed them.
The fact that he kept them suggests he planned to use them for his own benefit. Selling classified nuclear secrets isn't a good look, but that's the hole he seemingly dug for himself.

Apparently Trump is asking for the search warrant to be publicized. 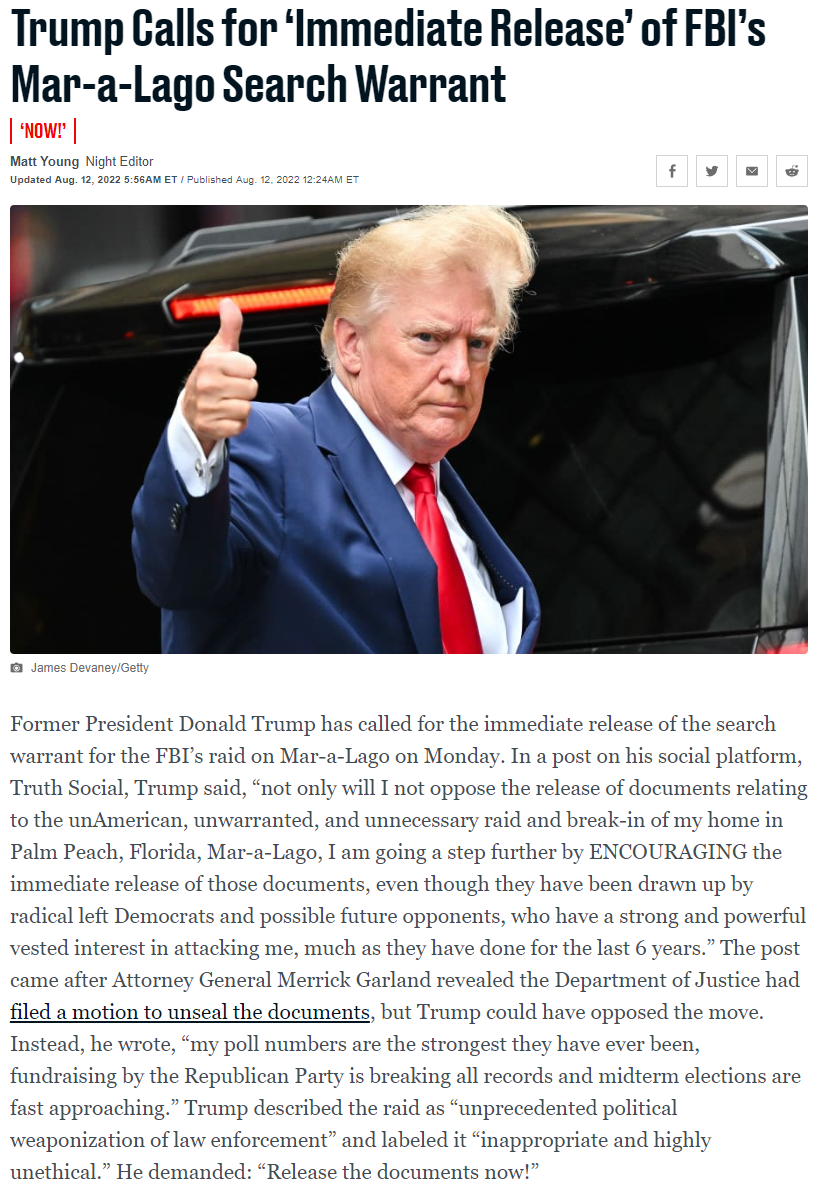 I wonder if he's banking on the fact that many in his fanbase don't read.
Like when Robert Muller's report detailed 11 instances of potential obstruction of justice, and he deferred it to congress to make the final decision, Trump's DOJ just said "nothing to see here" so it never went to congress, and his supporters didn't read it themselves.

The USA constantly reminds us why it's good to live in countries without a binary political landscape. The right half of the political spectrum is so much more reasonable when there is a clear distinction between conservatives and far-right extremists. The same holds true for the left half, although the left half has a lot more options to begin with. No surprise, because 'conservative' means to play it safe and progress things slowly, so there's really only one party needed for said attitude. But the left is about making bigger changes to the way that systems work, so there are notable differences in the stances of how to get there, hence multiple parties can be successful at the same time.

Well Trump tactics has always been that he believes that he can make pretty obvious lies that anyone could fact check but will not because he gave them an out "Fake News". Its a glorious strategy and you have to give him credit on using it because it allows him to lie without any real consequences to his base. The problem for Trump is that in order for this to succeed he needs right wing media to go along with it. If at any time right win media sours to him then the house of cards unravels.

I agree its going to be really hard to put a spin on having multiple chances to hand over those docs especially if they pertain higher than classified which means he cannot declassify. If their are national security docs about nukes the optics really look very bad and he basically just gave his opponents all kinds of talking points. It just seems so completely boneheaded but the GOP continue to dig their grave riding this horse right off the cliff.

The warrant has been released with a list of what has been confiscated:

Not a ton of new information, but this confirms all the reports stating that top secret information was obtained. I don't see how this wouldn't just be an easy guilty verdict at this point. I suppose Trump could try to make argue that he declassed this information, but "I secretly declassed stuff when I was President" isn't a very compelling argument given that there is a process for these things.

The Department of Justice announced today that they are now investigating the Southern Baptist Convention for decades of alleged sexual abuse cover-ups.

From what I gather there are some docs that cannot just be declassified because of National security.  The thing is the investigation does not seem to be concentrating so much on classification then that these documents were kept illegally.  Since Trump does not own those documents and the NARA even subpoena him for these documents shows a willfulness to keep those documents.  Investigators even went on his property to confirm he does not have these docs which put Trump in serious legal risk because he had a chance to turn them over before this whole thing blew up.  Now Trump is hoping the GOP stand behind him which for the GOP could actually put the whole party at risk.

Looking how this all unfolded, it would seem that Trump has given the Dems and Garland a golden egg as he moves from one lie or defense to another.  If we remember he was first trying to claim the FBI planted evidence.  Now he is trying to say that what they found he auto declassified but that defense actually doesn't work because the FBI isn't really going that route.  He lied himself in a corner as a private citizen without the protection of the president office and I believe he has seriously played himself this time.

If Trump declassified them while he was still in office, he wouldn't have been subpoenaed for the first dozens of boxes of classified documents back in June.
Unless his argument is that he didn't declassify the first batch, but only the second batch. But if that were the case there wouldn't have been so much evidence saying otherwise that a federal judge, FBI director and DOJ arrorney signed off on the search warrant.

He's only saying this because many of his cult followers believe anything he says.

For example, and this wasn't even talked about here, I think.
But a Trump supporter attacked an FBI building with a nailgun while carrying an AR-15. Presumably because he was planning on a mass shooting once he got inside. But when he failed to get inside, he fled.

Natural selection.
But this was because of right wing media drumming this up to be unlawful, that evidence was planted, etc, based on nothing.

After reading a few articles on the subject of the docs Trump had in his possession, I noticed how his story changed once the search warrant was release. First it was a raid, then we found it it was a search warrant. Next Trump and his lawyers try to suggest that evidence was planted but this does not really fly because the government tracks all documents, who has them and when they get returned. Meaning that its impossible to plant something that is already shone to be in your possession.

So when the search warrant was released, Trump changed his tune and now those planted docs were all declassified. The problem for Trump is that the search warrant and charges did not care about their classification but instead that he still had documents no matter their classification in his possession that were not his to take. Even worse for Trump they found exactly the documents they were looking for which included docs even the president cannot declassify. So now Trump has changed his statements again saying all presidents take home their work etc. Problem with this defense is that 18 months since he left office, being subpoena for those documents shows a willfulness to keep those documents he is required to give back to the government. The fact that the government got a signed statement from his lawyer saying he returned everything is pretty damming.

I guess the real big issue is will the DOJ actually seek criminal charges or will they just be happy with getting the stuff they were looking for and end it at that. Even if the DOJ could get a conviction would it be worth it. Personally, if they have the evidence they should present it and go forward. Forget about politics and proceed as they would if this was another employee of the government who tried to take documents from the US.

There was no reason for Trump to keep some of those documents even if you believe he was keeping them for keepsakes. Its not like you can just allow anyone to look at SCI/TS documents once you are out of office and even an ex-president cannot view them once he leaves office. This was a very dumb thing Trump has done and I am sure he will look to find a fall guy but who in their right mind would look at 5 to 10 years in prison.

Has that been confirmed? If so, could I see a link to that story?

I almost feel like they'd have to at this point, because Trump convinced his cult that this was unlawful/a set up, etc.
If this ends without him being indicted, they'll be even more convinced that this was "another hoax".

Though even if he is convicted and sentenced, there's still going to be a huge portion of them that believe he did nothing wrong, and that the FBI and DOJ have proven themselves to be the enemy of the USA, etc.

The day Trump passes away from natural causes is going to be insane. They're all going to claim that the deep state killed him and they will commit more terrorist acts like Jan 6.

Random note but for all the downplaying by the right about the severity of January 6th, it's telling that just mentioning that date lets people know what you're talking about. That's pretty rare for American culture and puts it in the company of days like 9/11 or July 4th. Obviously the 6th isn't as well known as those days, but we'll see if it stands the test of time.