I mean, the news clip I posted shows the bodycam and a stillshot of a gun in kids hand. I can also post you a 11min clip with initial 911 calls and security cam footage if you wish. You can slow the bodycam part down yourself and see the gun. And understand the bodycam isn't actually recording through officers eyes. He even tells the kid to drop it.. I'd say had he not ran and the pick up the gun trying to hide it and raise his hand he most likely would still be breathing. But unfortunately as you said, logic doesn't always kick in.

I don't think people are ok the result is always death. I don't think even US cops are ok with that. Just look how many responses there are each year. How many arrests. How many armed or violent people arrested without result of death.

About training.. it's a job you mostly learn by doing it. Training is important of course and you should regularly do it throughout your career but it only gets you so far. You can train for 10 years and still something unpredictable can happen in the first high-stress situation. Some people aren't cut out for the job and it might get unnoticed until it's too late. There's plenty of footage US cops doing outstanding job so I guess lack of training isn't a problem everywhere.

For example in Finland training is 2,5 years. But around half of it is training on duty with a senior officer. It's 10 months in academy and you're working as a younger officer. So you are basically a cop. And that 10 months includes basics of pre-trial investigation, Basic forensics stuff and so on, not just use of force situations. And there's actually very little taught about de-escalation and interactions with people, suspects and stuff. It's something you learn with experience anyway.

Probably not. The case you're referring to is based in the UK. The link to the US is pretty tangential, and it doesn't implicate any major US policies. There are some US elements to the story such as the actions of US companies, but that really doesn't fit the definition of politics, so probably better to start a new thread if you want to discuss it. More people will probably read it that way anyway.

Trump wants Covid vaccine to be called the Trumpcine.

Sure, Donnie Boy, if we can name the Covid virus the Trump virus.

Oh, and speaking of cognitive dissonance: 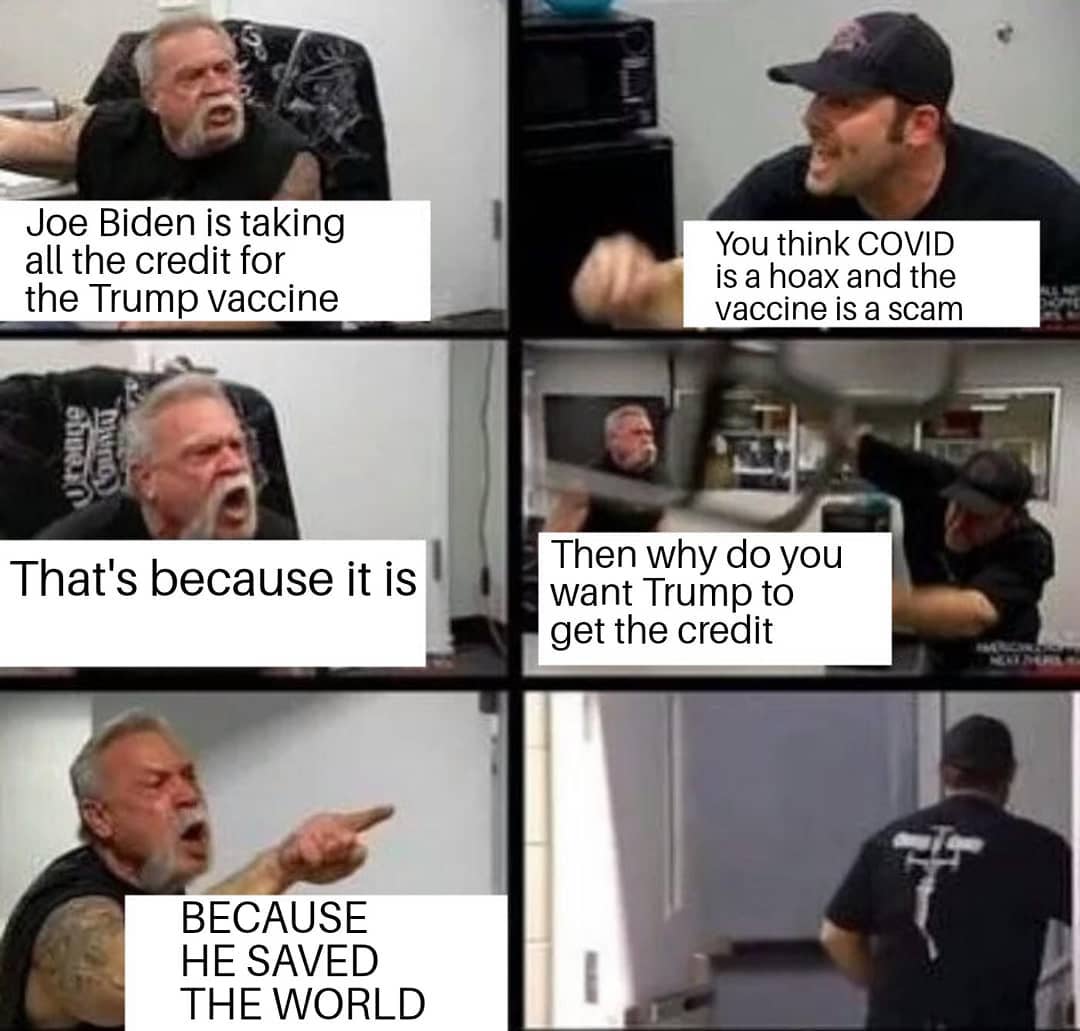 Interesting, when I saw that news clip it jumps after the freeze frame of the gun to the kid putting his hands up and then the shot.  Actually you have to read the comments on videos like this to see that there are a lot of people who are actually very much ok with the outcome.

Do cops do good, yes, that is not the question.  The question is when cops do bad, are they held responsible.  In the past it was always your word against the cop and basically you were done.  If you were a minority, especially in most southern states, well good luck.  The advent of bodycam and camera phones is what put these situations on notice.  The thing is when someone gets killed by the police its just a mistake and while this one is tragic its still was a mistake.  There are plenty of video of much worse cases as I described and those are the ones that do have video evidence.

As I stated, the job is stressful and because of that, not everyone is cut out to be a cop.  I am more than happy to pay more in my taxes for better salaries, training and equipment that helps police do their job and also not have that shoot first then let GOD sort it out mentality.

There's a relief. Now to wait and see how all the other awful killings in the news lately pan out.

*shrugs* I guess we're supposed to be impressed by that, like look how far we've come, but seriously it really was the least our criminal justice system could do. And to think it only took last summer to make it happen. Congratulations us.

I mean seriously, what else could they do? Recalling last summer for just one second, can you even imagine what the consequences would've been if they had found him innocent? They had no choice! That's why even most of the cops went to bat against Chauvin. What else could they do if they wanted a metropolis left standing in this country? So of course they found him guilty! But what about all the other cases? Any reforms coming down the pipeline or was this it?

Whelp, at least it happened.

If you want reform you have to fight for it.  Nothing is given if you want change.  This will definitely be it if people go back home and believe that the skirmish was the battle.  Real change takes dedication and a prolonged fight, not the quick hitters set to appease the mob and send them home.  Yes, Chauvin was the sacrifice but you really cannot moan about the result if nothing comes next if you do not have a plan.

If you want to know what will happen next, well that depend on US.  You can definitely believe the Police isn't looking for reform so the people have to demand it.  Nothing short of that will move the needle and the expectations should be this will not be an easy fight but one that will take dedication and perseverance.

almost like there's a difference between a murderer going free and not.

How much you want to bet Ben would be saying justice was served if they let a murderer cop go free yet again? Which thankfully didn't happen this time.

Russia announced that it will pull back its troops from the Ukraine border by May 1st.

What is Putin trying to prove? What does he want? Another piece of Ukraine? All of Ukraine? He must not be appeased.