Forums - Gaming Discussion - How much did you pay for gaming this year? End of 2018 Edition

So far in 2019 I am at 140 euros, should reach my 200eur norm.
(Fire Emblem Warriors, Civilization VI, Yoshi's Crafted World, Starlink, Project Highrise, Flat Heroes, The Next Penelope)

I have been so busy, I have spent $0 so far on gaming in 2019. Mostly been playing old games too.

The choice between Traveling, Socializing, Movies, Shows, Studying, and Video Games is too hard!

Well, one year later a lot of your choices are (temporarily) gone:

My first third of this year has been unusually inexpensive:

And that trend will probably going on until November, since I'm clearing a lot of my backlog until the new consoles arrive. Also lots and lots of free games from Epic & Co. and great Humble Monthly games.

I probably won't buy any new games for the current gen this year... the 2020 console hits will probably look a lot better (and load much faster) on PS5 + XSX.

Thanks to GamePass Ultimate I still have a lot of new stuff to play (I played the hell out of Ori 2). The only full priced game so far this year has been the awesome Half-Life: Alyx. 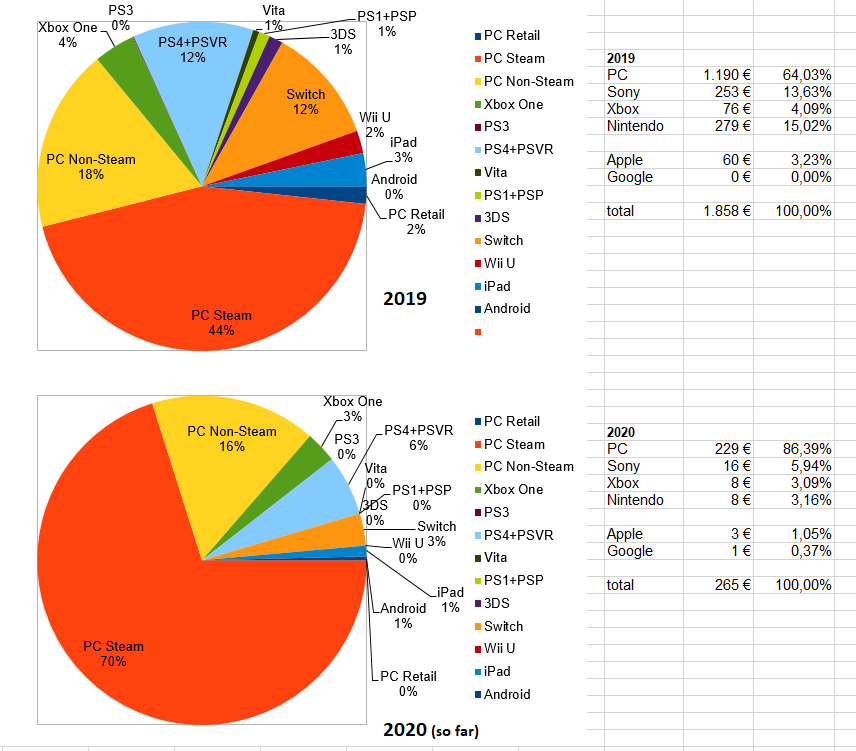 It is very true, I have been working from home since February and I declared to myself that March was a gaming month. And game I did. I bought Romance of the Three Kingdoms XIV and Nioh 2 for PS4, and completed my first run-through of each. ($120) In April I started some Apex Legends. ($0)

On PC I completed another game each of Crusader Kings 2, Civ 3, and Darkest Hour. While also playing through Divinity Original Sin 2. ($0 this year)

So yeah 7 games with quite thorough play. Cutting commutes/gym and stress from at work can do wonders for gaming time.