The Legend of Zelda: Ocarina of Time?

It couldn't really be anything else, so yes, correct.

Well, there goes. I knew this game would be on everyone's minds when it came to my list, so I tried making really hard hints because after all, it's my #2, I didn't want it guessed too easily. Since people would be thinking about it, I figured someone would guess it eventually, and I think maybe a few of you have thought about it, but just didn't think it could possibly be...

#2 - Before the credits roll, you get to stare at the game's logo for a good 30 seconds or so. (spoilers!)
It's a game about a goddess turned mortal. (also spoilers.)
The villain's name is quite unpronounceable.
You start the game in an island.

Indisputably in second place on the list, is the monumental 'Star Wars: Knights of the Old Republic'. How can something be better than 'Super Mario 64'? I didn't think something could, but it happened in this Star Wars game, the quintessential role-playing game that sucks the player into it's rich world and amazing story helped by it's seamless, perfect gameplay.

In fact, the game has a 'Star Warsy-story' more "Star Wars" than real Star Wars movies! Besides maybe the original; A New Hope. A classic battle between good and evil, or in Star Wars terms, light and dark. The hook is that the player decides through a long process of actions during events throughout the story, choices and conversations with companions and others, whether or not he or she sympathizes with either the light, or the dark. Each action of course has far reaching consequences during the course of the story and during the end-game especially, and the pay-off for either side is grand.

It includes what's probably the greatest plot-twist ever told in gaming, and I never even saw it coming. In a cutscene displaying some amazing direction and cinematography, and I doubt this is still a spoiler to anyone but skip a sentence or two if it is, it will slowly dawn on you that you are in fact, the Dark Lord of the Sith that the entire Galaxy is afraid of, but in some way simultaneously admires. Your memory wiped and your strings now pulled by your closest companion. I fell off my chair; my mind was blown in a way I never experienced before or after. If you play through the game more and more times however, you'll start to notice there actually were plenty of subtle hints to this fact all throughout the game, but you just don't realize the shocking fact until it's too late.

The game came right when I was starting to be turned off of console gaming and I played it on a personal computer instead, further cementing my idea of the home computer's superiority during this era. It was the sheer brilliance and perfection of this game that made me stay away from consoles and rather game on computers for several more years. There was no way a console could offer anything better than this. And none did since. 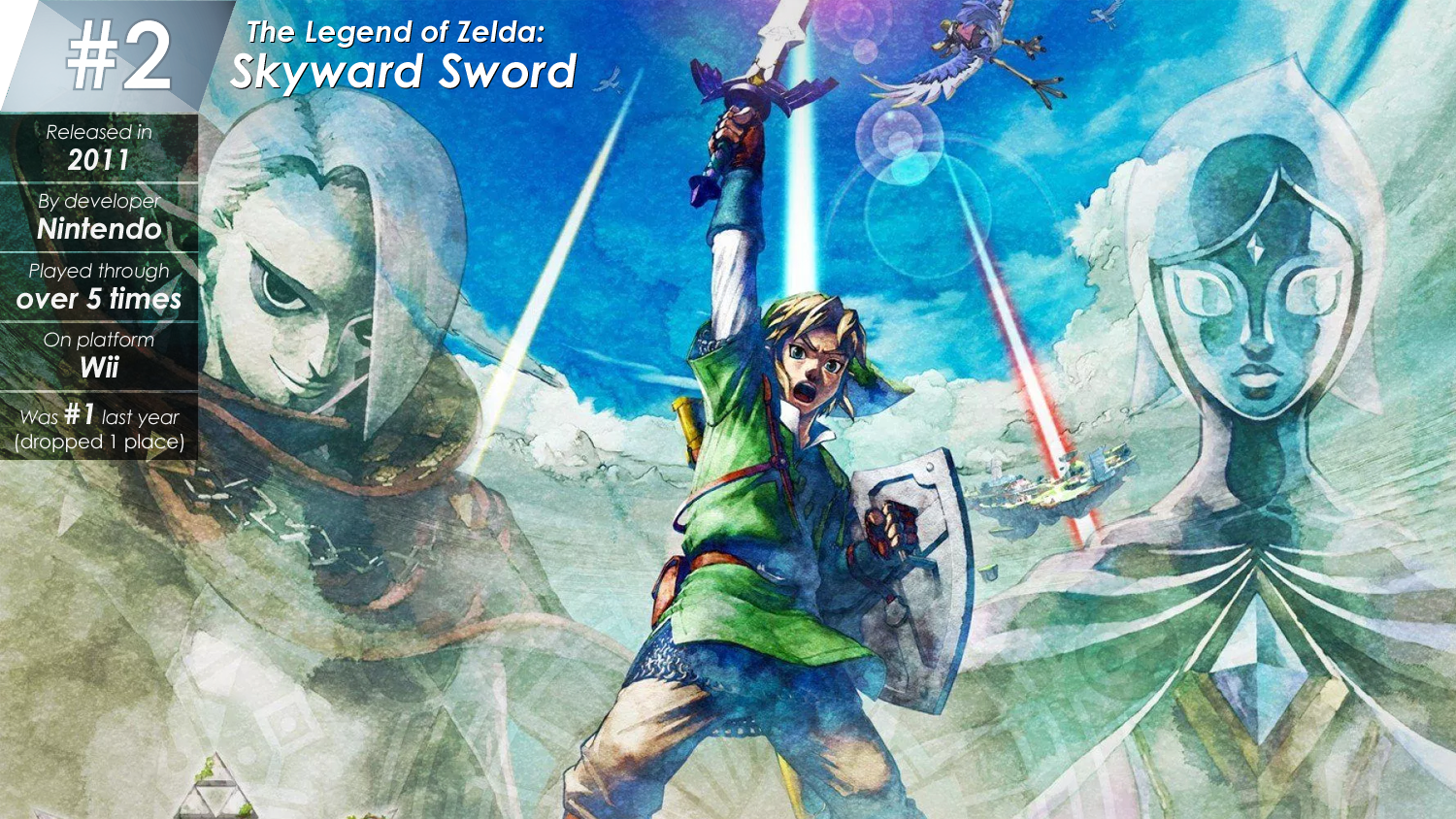 Welp, finally done with that. Big plot twist, yeah, I know, but it's December 31st so let's finish this.

#1 - There's only one possible choice now, isn't there? Should be a pretty simple guess.

The Legend of Zelda: Ocarina of Time

And there it is, finally. After some time of discussing games, this is the point where we reach the top game of all, the number 1 greatest game of all time. 'The Legend of Zelda: Ocarina of Time' certainly is that. The game equals perfection in every way and it would still be the only game I would ever give a perfect score. At least up to the present day, who knows what the future brings. This game is usually on my mind, even when playing something else, because this is what I'd rather be playing!

The game features the most classic good versus evil story one could imagine. In fact, there's a lot of comparisons to be made between it and 'Knights of the Old Republic' in the #2 spot, so you could guess what kind of story I like. Simple and sweet. Link is an unsuspecting youth growing up amongst a tribe known as the Kokiri, when one day he is called upon by the guardian of the forest, the Deku Tree. As it turns out, he is not a Kokiri at all, but was left there hidden away after birth because he is the child of Legend.

One of the most epic moments in all of gaming is when the player enters the chamber behind the Door of Time, and pulls the legendary Master Sword from it's pedestal ending it's eternal slumber. Unable to wield it yet, Link is entombed within the heavenly Sacred Realm to wake up seven years later, only to find the world now under the depressing reign of the evil Ganondorf. When the game seemed over already, it turns out it's actually three times larger than the part you already played, and some of the best moments are still ahead. Unparalleled world and level design decades ahead of it's time, a feel of epicness and wonder never again seen and memorable event after memorable event make the game something special from start to finish.

I was already familiar with the series, and 'A Link to the Past' was already one of my favorite games. Even as a child in an age when there wasn't really much of an internet to speak of, I was very well aware of this game's impending release. I don't think I've ever been more hyped about a game release before or since. I begged everyone in my family to get me this game; someone, please, buy me this game. I would even wash the dishes for a year. I even proceeded to draw a picture of the box-art to show people so they would know what to look for. It was wrong though, I used lower-case letters instead of upper-case, and colored it gold instead of black. It wasn't perfect, but thankfully, as it turned out, people got the message. And the game thankfully was perfect.

There's many more stories and memories attached to this game, and I could go on for a while. Still to this day, when I once again see the end credits roll, I watch it without blinking an eye. It remains ever as epic. 'The Legend of Zelda: Ocarina of Time', it is still the greatest game ever made.

Lol I was totally fixed on Skyward Sword being #1, so I never considered the possibility of it being #2. Well played.

It's a shame for Liquid Laser because he had this one, but, yes.

I am not only extremely good, I am also fast as lightning.

And apparently lightning is faster than laser.