And Haddad has shown support to Cuba, Venezuella and many other dictatorships.

Look, he has won.Can we all agree that we wish that he makes the best choices possible and move on with this discussion?

Yes, let's compare. The left-wing dictatorships are bad. But being bad is a staple of Latin American politics and happen across the political spectrum.

Let's look at the results of the recent "conservative wave" and a few former neo-liberal governments on the region, shall we?

Mexico and Colombia: the results of the war on drugs speak by themselves. It started to change for the latter only when the country became more somewhat sensitive to the poverty issue. Now Mexico is going the same path with their new president.

Peru: coup d'etat on the 90s and now the Fujimoris are on prison, charged with corruption.

Paraguay: it was basically an isolated far-right Venezuela ruled by the Colorado party for decades, right in the middle of the continent. More recently, the former conservative president claimed he wanted to shoot his balls before having a gay son, tried to change the Constitution and be a dictator for life.

Argentina: twice hailed as the Ur-example to South America by the IMF, back in the late 90s and recently again with Macri, now twice bankrupt and in recession.

The future coming to Latin America right there, y'all.

Besides, much like Argentina proves, and the comparison of social indicators from before and after the military dictatorships, shows just how much damage untethered neo-liberalism can cause in the continent. Then it becomes clear why dictatorships were needed, the policies were just that unpopular. Elsewhere, in Asia, for instance, every extreme capitalistic country I can think of, like South Korea, Taiwan, Singapore etc. have been dictatorships or single-party ruled and sponsored by the US as well.

And it's not like Bolsonaro will stop supporting dictatorships, as well, since the agribusiness will still keep selling soybeans to China and chicken to Arab countries. Much like Trump sells firearms to Arabia, money talks the loudest, specially if it's the money of one of his major supporter groups. Hey, much like Bolsonaro says, all this talk of "ideology" belongs to the other side, the lefties...

Hey, if Bolsonaro ends up dissapointing and turning the country into a dictatorship or something of the sort, I will be the first to admit I was wrong.But thats my problem with the people here.They condemned  Bolsonaro for something he havent done or is(still, at least), like being a fascist and threatening the democracy of the country to name a few, while they say the opposition is the "savior" of democracy, when it has already been proved, and many of the integrants of the party were convicted, that they have commited serious crimes such as corruption and/or enbezelment, just to name a few.Not to mention that, while Bolsonaro might indeed fail in improving the country fortunes, at least he would have done something different that had a chance of success, while the opposition would have done the same thing, and failed as they have failed in the past.You talk about the ammount of damage that untethered neo-liberalism can cause, but you have never seen the damage that extreme socialistic measures can have on countries and its people.

When Bolsonaro praised the military dictatorship, I always understood that praise as a"I want to have the economical growth, security and education that time period had, but without the oppression of a dictatorship".People have some kind of stigma when you bring up the word dictatorship, but they always somehow forget all the benefits it did bring to Brazil.I am not approving the regime by saying this of course, but Im also not closing my eyes on the things they did right.The world is not black and white, unfortunely.

And Brazil is Brazil, not these other countries.We are, by far, the country in South and Central America that has the biggest potential.So  Brazil has much more possibilities and policies that they can take to improve the country and avoid being on the situation in one of the countries you just mentioned.And I dont know if you are a brazillian or not, but like I have said, the choice was betwenn going for something new, which has the CHANCE of bringing the country back from the hole it is buried in, or just keep going on the path it has been the last 16 years, and end up as one of those countries you just mentioned.

And about the part of doing business with those countries: First of all, someone who is knee deep into trouble, dosent get to choose his options.If doing business with countries that has a shaddy government is the only way to get out of the hole you are, then go for it.You cant clean someone elses house, if your own house is dirty.Thats how I think.Unfortunely, the world is simply unfair.Secondly, not doing business with said countries will not improve their situation.Rather, it will probably starve the people out, because the ones in power will keep stealing, and they will steal whatever has left, and if that kills the people in the process, I doubt they will care that much.A solution for these problems has to come from within, from its own people, because they are the ones responsible for the situation, and there is so much an outsider can make.And finally: A president will do what is best for its people.He is a president of that country, not the whole world.Dont expect things out of him that he ahs no power over.

The world has become more beautiful ...

Trust me, now that he's elected, I want him to be the best president Brazil has ever had. I'll never wish bad things to happen because of pride. I'm not Lula.

Sorry if I was a bit.... agressive with you somewhere in the thread.Lets just all wish the best for the future now.

Even if people don't have a clue about what goes on in Brazil, you know they won't care even when informed.
There have always been people who don't care about hate, violence, bigotry, fascism, racism, etc, as long is it doesn't affect them. They'll support credibly accused sexual predators as long is it benefits them or their prospect of security.
But I think the big shock for many people around the world in the past few years is just how many support their cause, and how they're now very open about their support for such hateful ideologies. That said, I think they're still very much in the minority. It's just that they manage to convince enough moderate people. In this case, it was the big corruption scandals that they took advantage of.

Defeating Hitler didn't change human nature. There are compassionate people, and there are selfish people. A giveaway is when they are happy at the expense of the other side's misery. For example, minutes after the election, a man with a rifle said this to a gay person: 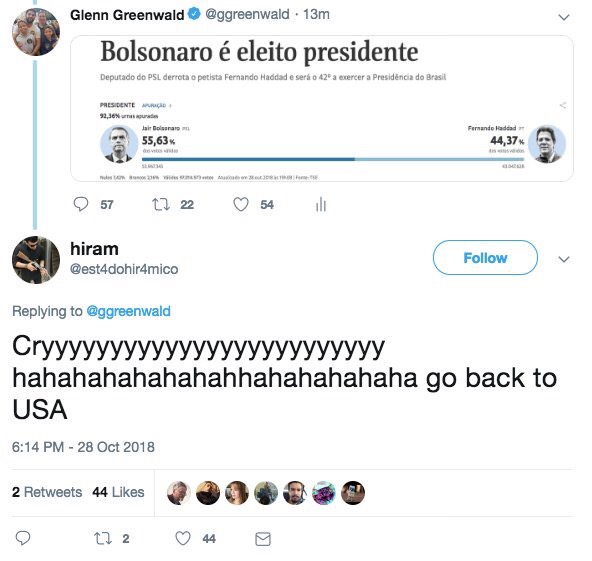 I've observed a lot of people particularly happy to "own the libs" in recent times, and I've never understood that mentality. I don't want you to be hurt. I just want you to have healthcare. But not everyone is wired the same way. We have to accept that.
It's as if we have to go through cycles of these terrible things until we hit the boiling point and moderate people go "oh, that went too far..", and we put a lid on it. That hateful side becomes suppressed, and they play the victim until the time comes for them to take the stage again, and the cycle repeats.

It's only been about 25 days but this government is already going far beyond the levels of shittiness even I was expecting, never mind the people who thought it'd be fine. This whole place is self-destructing more rapidly than Chrom mains at Smash tournaments, and in several ways it's gonna hurt more than just Brazil, they're doing things that can affect the whole world.

I don't know...Flavio Bolsonaro aside things feel pretty calm here in Goiás at least, but maybe our recent political history made me see corruption scandals as "normal".