Fox News (sic) said it was a myth. Turned out to be alive and well in their own building.
What are the odds?

Hmm, that are disagreeing empirical data, but as in most of these cases it is basically methodology and definitions are actually creating the differences. I think the main point here is for starters the definition of rape. Also what consists of 'rape culture'. The last one basically means if society or a part of it is accepting or tolerating rape. Which is again a question of definition. What consists of accepting it. Because I'm pretty sure the actual crime is not accepted by basically everyone, but if it is asked to remove micro-aggressions from language, a lot of people will disagree and may now be categorized as accepting rape. So these explains the difference in stances.

Basically if the sides would communicate properly, there would be not much discussion, I see practically everyone agreeing over the basic stuff here, the differences are stemming from definitions and exxaggerations on both sides of discussion. Add in, that Twitter and Facebook love extreme positions more than moderate ones (meaning the extremes get more retweets, likes and so on) the polarisation of basically agreeing people is even increased. So in my opinion the whole discussion is more or less pointless and takes attention away from problems.

You dont need to change it when you're right. Just happens that he's been right on these issues.

To ignore just how prevalent behaviour that encourages or justifies rape is in American society you have to be ignorant, cruel or both.
As such, this guy is talking shit and isn't worth watching. - CHANGE MY MIND

Yeah mate it's just like in Saudi Arabia. Amen

Well, as I think both viewpoints are valid, I see no need to change either yours or Steven Crowders mind.

What behavior are you referring to here?

Jackson Katz, a social researcher, asked men what they do on a daily basis to avoid being sexually assaulted. Then he asked women. 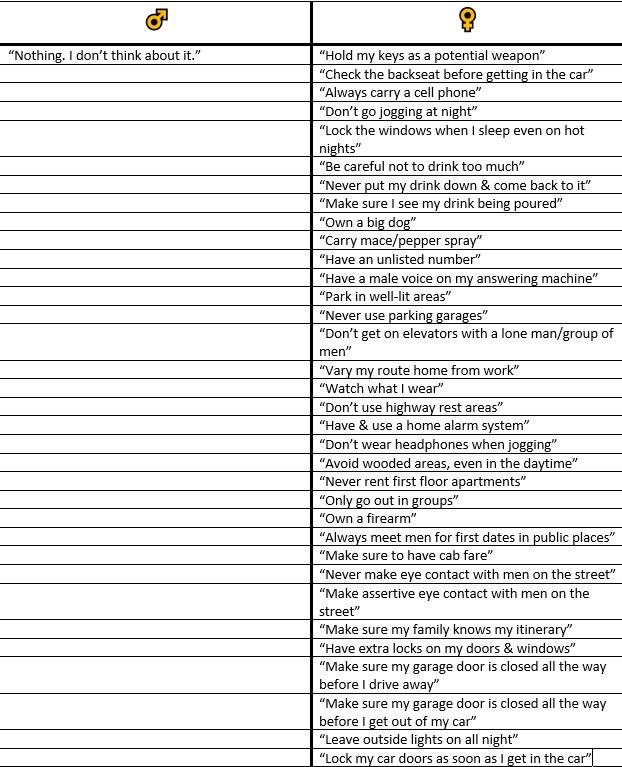 3. A judge who sentenced only 30 days in jail to a 50-year-old man who raped a 14-year-old girl (who later committed suicide), and defended that the girl was “older than her chronological age.”

4. Mothers who blame girls for posting sexy selfies and leading their sons into sin, instead of talking with their sons about their responsibility for their own sexual expression.

6. Supporting athletes who are charged with rape and calling their victims career-destroyers.

7. Companies that create decals of a woman bound and gagged in order to “promote their business.”

8. People who believe that girls “allow themselves to be raped.”

9. Journalists who substitute the word “sex” for “rape” – as if they’re the same thing.

10. Politicians distinguishing “legitimate rape” and stating that rape is “something that God intended to happen,” among other horrendous claims.

11. Calling college students who have the courage to report their rapes liars.

12. The ubiquity of street harassment – and how victims are told that they’re “overreacting” when they call it out.

13. Victims not being taken seriously when they report rapes to their university campuses.

14. Rape jokes – and people who defend them.

15. Sexual assault prevention education programs that focus on women being told to take measures to prevent rape instead of men being told not to rape.

16. The victimization of hospital patients, especially people with mental health issues and the elderly,  by the very people who are there to protect them.

17. Reddit threads with titles like “You just have to make sure she’s dead” when linking to the story of a 13-year-old girl in Pakistan being raped and buried alive.

18. Reddit threads dedicated to men causing women pain during sex (I’m not going to give the thread credence by linking to it).

20. Publicly defending celebrities accused of rape just because they’re celebrities and ignoring or denouncing what the victim has to say.

21. Assuming that false reporting for sexual assault cases are the norm, when in reality, they’re only 2-8%, which is on par with grand theft auto.

23. Women feeling less safe walking the streets at night than men do.

25. The fact that we have to condition ourselves not to use violent language in our everyday conversations.

Is your mind changed yet?

All I can say is thank God I don't live in the USA. Sometimes I think Europe is the most ridicilous place on earth, but I only have to look to the West and see that a single country can contain so much more BS.

Believing in the principle that someone is innocent until proven otherwise from any given crime is hardly supporting rape. Perhaps this is an American thing or something exclusive too religious nutjobs. But I never heard a girl was asking to be raped or was willingly doing so.

Abortion rules are backwards in most places so I can give the people who say there is a rape culture that, although that's more of an ethnic discussion of which rights unborn childs have.

As for most stats, many are presumptions based on the number of filed and unfiled claims, problem is the latter is pretty hard to estimate. It could be 1 in 2 women for all we know, it could also be in 7. As for male rapes that number is even harder to estimate.

Now undeniably rape is a very big offense and probably one of the worst crimes. But to say we live in a pro rape culture is a big overstatement. We live in a society that struggles with rape. Just like it struggles with drugs, theft, cybercrime, piracy and violence. Just because we struggle with those issues does not mean a society is pro any of those.