I'm not saying it can't be a stage, and I also don't believe that 103 or 100 is the max # of levels we will get.
I'm just saying that as of right now, I'm just going to assume that "stage" is nothing more than a story stage until told otherwise.

The game is large enough with all of its characters and stages that whether or not we get anymore is irrelevant to me. More is always good, but I'm not going to complain if that ends up not being a playable stage.

I believe it will probably be a stage, but in the same sense the biggest argument against it is staring at us in the face. We had a huge clear view of the stage being showcased. The dragon flew around, and fought people on it for quite some time. It wasn't like a quick flash. Yet despite how anyone with half a brain could see that is not a stage we have seen before, he did not include it in his 103 stage count.

Also he didn't say OVER 103 stages, or Over 100 stages. He just said the number. With songs, we got over or roughly. With characters, no amount has been stated. Stages is like the only concrete number we have gotten. Does that mean that it is the final number? Maybe, maybe not. For now, I'm going to assume yes that is final.

Edit: BTW, anyone know how many stages are missing that have been in past games?

Thats true, stage does look like a more level ofnsingle player (completely flat), who knows. Im satisfied with the game now. Even if nothing else was added so i agree

I mean the wording of it "he can" seems like a random thing like how the other stage bosses work. In SSBB, Rayquaza and petey prihana show up as bosses 100%, they wouldn't say "they can show up"

Of course its nitpicking a bit but time will tell. Just strange how he worded it. Stage does look more single player focused so ill go with that for now

Ok nvm now, its shown that only 1 player is on the map when fighting that MH dragon. Boss rush or story mode confirmed

First off, while the text says "he can show up" sakurai (or the translator) says "he appears as a boss".

More importantly, the word can could be used to express possibility, but also capability.  Like, if I said "I can speak English or Spanish" I am not talking about probability, I'm just listing two things I can do.

Also, I think it's interesting that they alluded to the hidden mode right after showing Rathalos, and that they seem to have a mini cutscene for him.  All signs seem to point to him being a boss in a subspaceish mode.

Just wanted to give my opinion on the Rathalos thing, is that the footage we see him in is most likely from a Boss Rush mode, like Brawl had, because if you look at the Dracula footage there is only 1 time that he see more than 1 character fighting him(unless I'm competently misremembering but at the very least in the Simon trailer, Simon is the only character on stage before Dracula shows up) , the cutscene could literally be just for the Direct,like the zoom in on Dracula while he was siting,and to where you fight him in that a location from MH4(or so I was told), so that is also most likely a stage in the game, yes Sakurai did say that Ultimate had 103 stages, but at the bottom of the stage selector there is room for at least 6 more, now I normally don't like this type of speculation, but in a game like this it feels weird that they would go that far and leave it like that, plus while they were specific in saying 103 but they weren't when talking about that nº including FD and Battle Field form just saying 300+ instead of 309.

And finally assuming that Rathalos is part of a story mode, my question is why would there be a boss plus location from MH in the story without a MH character, and if a MH character is in why wouldn't they get a stage?

@mZuzek
Btw I forgot that all stages can be turned into Omega (Flat) mode now, so in that case, any examples of stages you think could be problematic in tournaments in Omega mode? 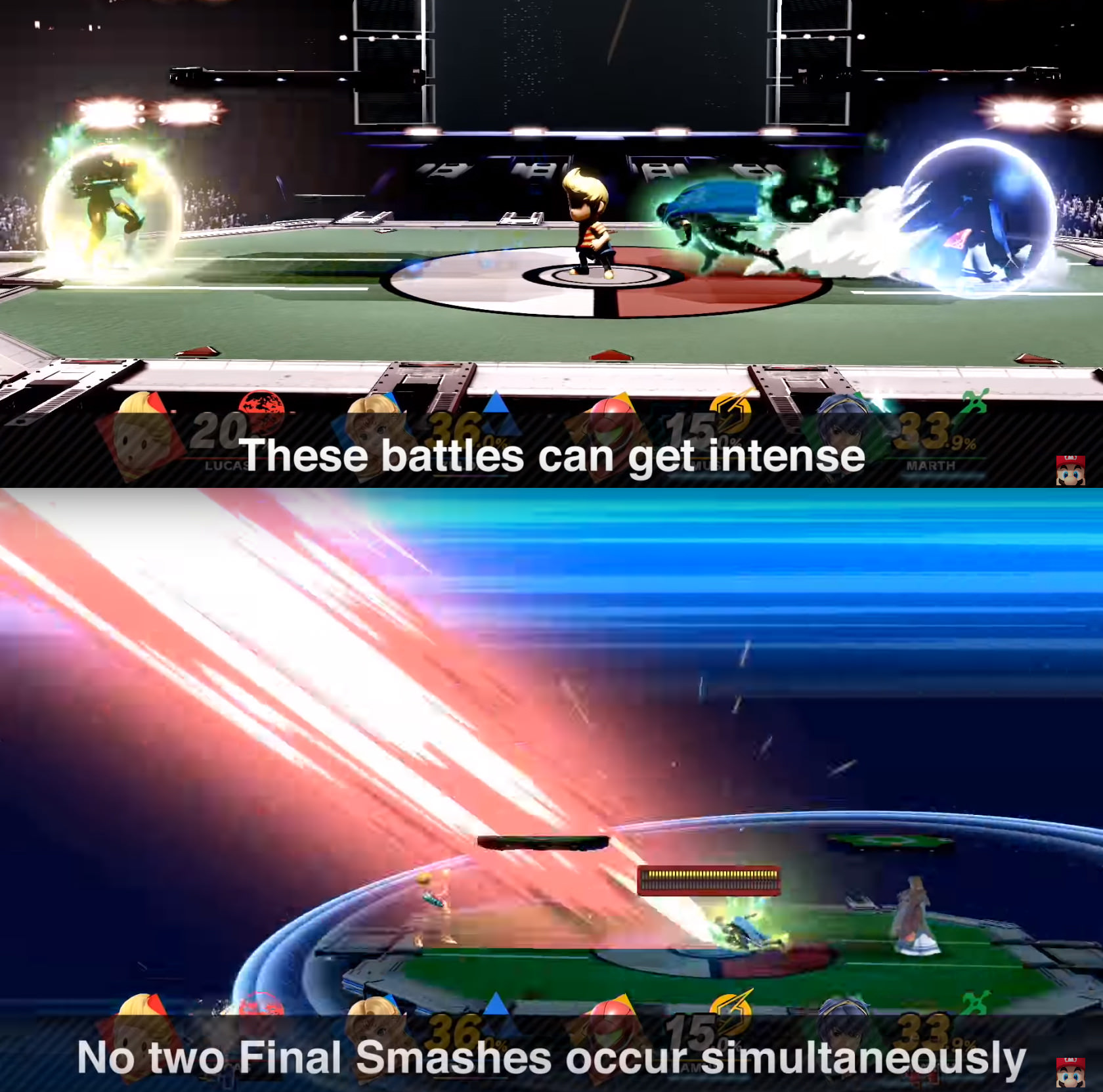 It went from 20% to 68%. I'm not sure how much damage Marth's stronger Final Smash does and how it relates to the knockback of his attack, but I'm surprised it was that effective against a 20% opponent. He didn't look anywhere close to being able to recover from that attack.

Not really. Omegas have been around since Smash 4, and back then nearly all of them were banned, likely because there were tiny differences between them which made people want to narrow them down. Now we have both Omega and Battlefield forms, however Sakurai has said at E3 that they have the exact same size and properties as Final Destination and Battlefield, so if that statement is 100% true then all Omega and Battlefield forms should be legal, though of course they'll be treated as one with their "original" stages on the stagelist. And speaking of the stagelist, I was looking through them all earlier today and "only" managed to come up with 25 possibly legal stages, of which about 8 or 9 weren't even that good to begin with. So, maybe the stagelist won't be such a huge mess after all.

About Final Smashes, upon further thought, yeah, no way they get into competitive. First, because yeah they're still too strong (OHKO at 20% lolz), but most importantly it's because you can't really defend against someone using a Final Smash. Once they have it, you just have to accept you're likely getting hit by it, because there's just about no counterplay to them. That, and they also look quite unbalanced (even if far less so than in the past), for example Mario's Final Smash is quite underwhelming if you compare it to the likes of Marth.

Yeah that's what I was thinking when I saw Marth's Final Smash. Though the huge difference between his Final Smash and the others makes me wonder if they just didn't adjust the knockback of his attack yet. Its KO power appears to be exactly the same as the original.
If it was left like that intentionally, it could be because, at least as far as I remember from Brawl, due to the start up animation of Marth's Final Smash, it could be easily avoided with an air dodge or jump. (It could also be side stepped, but that's more risky.) And if Marth flies past a stage ledge, he'd end up falling down and dying.

I'm not sure if not being able to avoid the ones that don't OHKO would necessarily be a problem, if the damage and pushback is reasonably adjusted. I suppose they could also make it so that weaker Final Smashes don't deplete your shield much, so that most of the Final Smash can be blocked.
But depending on how easy/hard it is to avoid the OHKO Final Smashes, that could be a problem since there's no adjustment to the knockback.

No one else noticed that the is a custom balance option then?