I'm assuming this is just a general PS thread about anything PS related. I recently got a Japanese PS1 console and I already had some imports ready to play. Omega Boost was a gen ahead of it's hardware and that game with spruced-up visuals would play great on modern hardware. It and ZOE2 have aged very well. I also discovered a game called Wolf Fang and it's one of the better run n gun mecha games I have played. Lastly, while I had digitally on PS3 for years. Took 23 years but finally got to play G-Darius again since I first played it in my local game shop in 1997. This game made me love the Darius games. Finally, have Strider 2 on PS1. Oh man, this game is as good as ever. Living on cloud 9 playing this on a Japanese PS1.

Side note I had to take apart my PS2 slim to repair it. For a sec I thought the whole thing died but no,just a scree loos on the inside door latch. The laser was a little loose as well and tighned it and cleaned the whole thing. The easiest system to do a quick repair on.

It's always a good feeling when you manage to recall and get a hold of some long forgotten gem. I recently recalled enough details about a game to be able to find it after 20 years. The game is from 1998 and is called Get Medieval. I was 8 and only played it for a few hours (at the house of my then brother in law while he fooled around with my sister downstairs) but I had a fun time (with the game).

This talk of old games makes me wonder why Sony doesn't just use their existing engines and redo older games.
Like, take the ND engine and redo Extermination, Ghost Hunter etc. Price them closer to AA.

Is It Wrong to Try to Shoot ‘Em Up Girls in a Dungeon? now available for PS4, Switch, and PC in the west for free

Is It Wrong to Try to Pick Up Girls in a Dungeon? Infinite Combate not required. 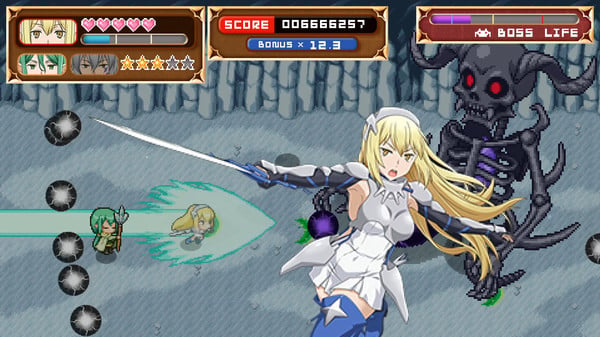 Is It Wrong to Try to Shoot ‘Em Up Girls in a Dungeon?,

I downloaded it last night, and only played for about 2 minutes because it was late. Seems very basic, but solid for what it is, which is an 8-bit style shooter. For those who care, the game oddly, very oddly, has no trophies. I'm guessing because it was originally a bonus item that came with the game "Is It Wrong to Try to Pick Up Girls in a Dungeon? Infinite Combate".

MediEvil: Am I a joke to you?

Medievil is great. If Sony remade Omega Boost and Ape Escape on PS4/5 I'd be ecstatic! Heck, why not. Throw in Wild Arms

Because it takes away dev time from other games. The question is do people want more remakes or newer experiences more often.

Well I'm not suggesting ND make these games, but rather non first party Devs beyond what Sony is already doing.

Of course I personally would take newer experiences but Sony has a lot of low-key titles that would feel fresh.

I bet they were also having a great time.