I just wasn't sure if it was a manhwa. Sorry if you mentioned that before and I happened to miss it. There's some interesting looking characters in this manga, and it being in color is nice as well. I'll give it a read. I'll see if I can get through all the recommendations mentioned.

I don't read AoT myself, but I did have a friend who did, and each time a new chapter came out, it seemed like something crazy was always going on, haha. I did watch the 1st season of the anime, which I found enjoyable.

I also watched the Erased anime, which I found enjoyable overall. I know some people were mixed about the later part of it, including myself, but the 1st half was really great. Is it worth checking out the manga version?

Promised Neverland is one I've wanted to check out for some time. I recall the art style sticking out to me.

Haha, yeah there have been some big WTF moments in AoT. I just thought that this one really stood out, even among those.

I mainly liked the sweet moments in Erased. They felt almost like a Ghibli film maybe? Overall it was a good watch, even if I had some qualms with certain things.
The manga develops some things more and differently. For example, the very first female coworker of his you see at the beginning visiting him in the hospital, she was with him during another incident not shown in the anime where he saves someone's life, and I think he saved her's too, or the other way around. But it makes it more believable why she would blindly trust him as much as she does later, when they had that backstory together. In the anime I found it just a little odd perhaps that she'd trust someone in his position, no questions asked, to that degree.
They also develop his mother's story more. But the most significant difference is the last act, which is completely different in the manga. They basically rushed the final showdown in the anime, wheres in the manga it takes place on a different island, and not the hospital. There are interesting conversations between the protagonist and antagonist that were missing from the anime as well.
But I've mostly skimmed through the later part of the manga, so I will read it properly soon, because yes, I did like the anime enough to make it feel worth it to read those portions of the manga.

Neverland's artstyle is what made me interested in it. It reminded me a little of Deadman Wonderland artstyle, but not a lot. I'm not sure what else it reminds me of though. Can't put my finger on it.
But Promised Neverland is an intense series, from the first chapter.

Best ever snowy Manga is Nononono

This thread is still alive? Cool.
Will do a full post later.

Later than I intended, but I am finally back to make that follow-up post.

Kengan Ashura is nearing it's end and so is Tomo-chan (if they ever get around to updating it). Does anyone have good recommendations for replacements?

Also, I've been reading Shougeki no Souma and finally caught up. Now, call me crazy, but I think the Noir Chefs in the latest arc are so over-the-top stupid, even for this series, that they're hilarious.

Do you mean by Tomo-chan wa Onna no Ko, cuz that's something I wasn't expecting to end so soon. If you're looking for a 4 koma to read, I think Mousou Telepathy may be something worth checking out if you haven't heard that one.

Also, I've also read and caught up on Souma and I totally feel you. With how the last arc ended, that felt more like an end to the series (And I would have been satisfied if the manga did end there), but the manga continued.... And this arc has just been really weird. The 'villain' just seems kind of odd as does these dark chefs. Heck, it seemed like the just skipped the 3rd challenge just to have Soma battle against the chainsaw lady already. Feels like the author is trying to rush this arc a bit now.

Heh...well I guess that's not so crazy, even if they do make the manga basically feel like a meme at this point. Honestly, It feels to me like the author is trying to cram as many plot points in as possible before the series gets axed. No idea who thought Dark Chefs was a good idea, but it makes me miss Erina's dad somehow.

I'm basically just reading for that eventual Souma/Erina reunion. If the payoff for that sucks, I'm probably out for good.

In the meantime, I just got caught up on Dr. Stone, another Jump manga that's been super popular lately, and actually has an anime already confirmed for later this year.

The premise is that a mysterious light turns everyone on Earth into a stone statue, essentially causing the apocalypse. One guy wakes up 3700 years later, and begins to rebuild society, reviving other statues and gaining new comrades along the way.

Most of the manga is about the characters crafting new things, which in turns lets them craft other new things, slowly advancing science in a prehistoric type setting. It's a cool idea, and while it does require some suspension of disbelief, the actual science lessons are pretty accurate and informative.

The characters are all pretty fun, and has one of the coolest MCs I've seen in a while. Overall it's a solid series and I hope it stays strong. 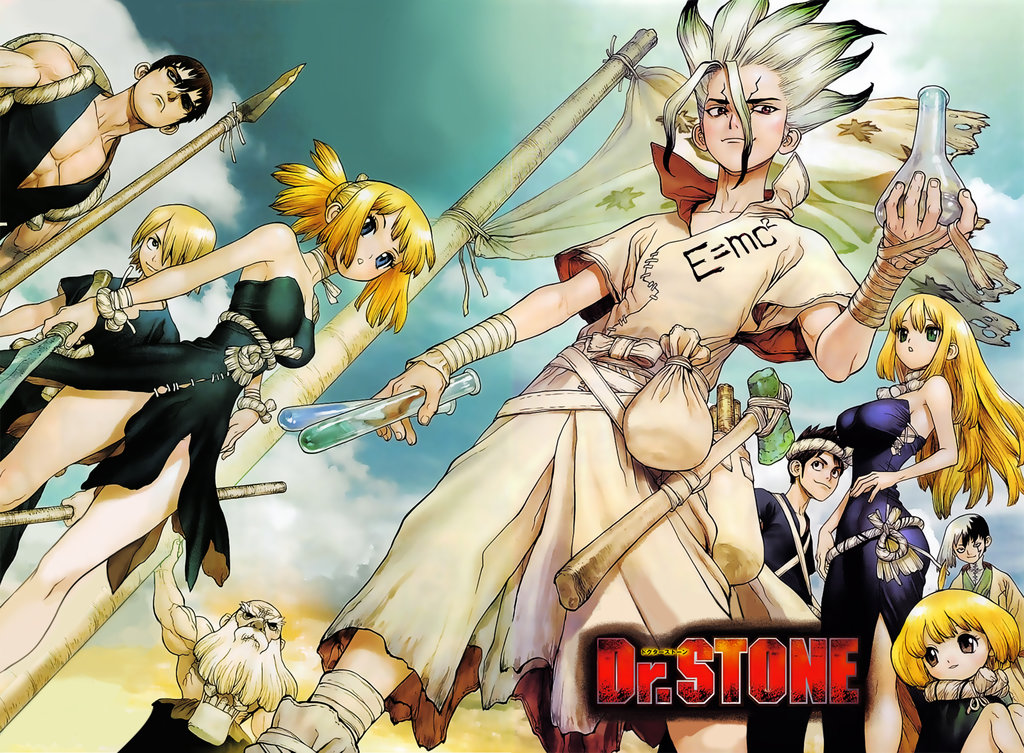 Yup, I do mean Tomo-chan wa Onna no Ko. The site where I read it has comments and several people claim that we are currently in the last volume for the series according to the author. I do already read Mousou Telepathy, which is excellent. I think I picked it up on your rec in this thread, actually.

I'm actually okay with the new main villain in Shougeki no Souma; while his behavior is quirky, he also has a grudge that makes the coming fight more personal to Souma. It's all of the surrounding stuff in this arc, like the tournament structure and the incredibly weird Chef Noirs that make me roll my eyes. The idea that the 'underground world of cooking' is so shadowy and dangerous and breeds insanely good chefs is almost laughable in and of itself. Imo it would've been better to have the BLUE populated by super-star chefs from various countries (the way it's implied to be run) and make it an international competition rather than the current mess it turned out to be.

Yeah, it does kind of feel like he's worried about getting the axe now that the main arc is done. I would actually prefer to see Souma/Nikumi even though I know it won't happen. I'm a meat-loving sort of guy and she's a real cutie too.

That Dr. Stone manga looks very interesting. I'll have to give it a try.

I already know that I need to re-read AoT once it's finished because I completely lost who is fighting who and for what reason. Just chugging along atm.

Also wanna do a re-read of Tokyo Ghoul re, or even all of TG, sometime this year because I had a similar problem there. Too hard to keep track of everything and everyone.

MHA is still great and I am excited for the upcoming chapters even if I fear that power creep could become an issue.

And One Piece is still the king. This arc is escalating much faster and I am looking forward to all the carnage that is going to happen.