only three months after the japanese release date, not bad

Saw 'Fate/Stay night: Heaven's Feel 3' last night at the theatre. I was mostly interested in just seeing the end to the trilogy; not having to wait another year for the blu-ray.

I'll say that it was slightly less dramatic that I thought it'd be, the plot could've even been explained a bit better, but it more than made up for that with the production quality. Boy am I glad I got to see it in an actual theatre. The animation, choreography and score for all the fight scenes was off the charts. Amazing experience.

Some throwbacks to previous parts of the series, including the alternate series 'Fate/Stay night: Unlimited Blade Works' (had songs from the OST in a certain scene). Also a very noteworthy cameo at the end by a character from 'Kara no Kyoukai (The Garden of Sinners)'-- another Type-Moon and Ufotable collab set in the same universe. I won't say it's necessary to have seen KnK, but it is an amazing series of movies and will help you understand the end of this one a bit better.

I did indeed watch 3 more animes in November.

Clannad After Story (25 episodes)- I admit I slowly watched this anime, and that it was a mistake. The first 8 episodes or so did not appeal to me much at all, nothing like the first season or the latter episodes of this season. I basically dropped the anime, but people kept egging me on to finish it. Well I did finish it and it was completely worth it. The music and the sadness coming together really hit me where it hurts. The daily grind was also quite relatable as well as the happiness that one could have with such simple pleasures. To finish it off with the very latest episodes to really drive home the plot points culminated in a fantastic ending.

Barakamon- I watched this one after watching Honda-kun, and I suppose the order does matter. People flame the other show for being different but I can appreciate both for what they are. This one had great self improvement/ finding oneself. I can relate with the going to an island thing and enjoying the life, because from where I come from, Japan is just an island. But this guy goes from Big island to small one. I enjoy the fact that he is a beast at his job, but also feels like trash. It is human nature to think that one can do better, and that is kind of my motto since coming out of my own rut. I can always do better, and I shake with excitement for what the future brings.

Saga of Tanya the Evil- She isn't really evil. Not surprising, but I suppose it may just be the English translation taking liberties. A strange isekai, not sure why they had to justify it. I feel like it was only so that the viewers could relate that the protagonist is a Japanese instead of blonde hair, blue eyed foreigner. After the first episode, the plot went about as expected with it being pretty much impossible to lose. I do wonder if this show had sequels if they eventually lost. Either way, I really enjoy geopolitical and pseudo historical timelines, so I give it a pass for effort.

Until I buy my next game or my friends speak to me, I am watching anime at record pace!

This year I've watched more anime than any other year.

In 2020 I watched/completed the following anime 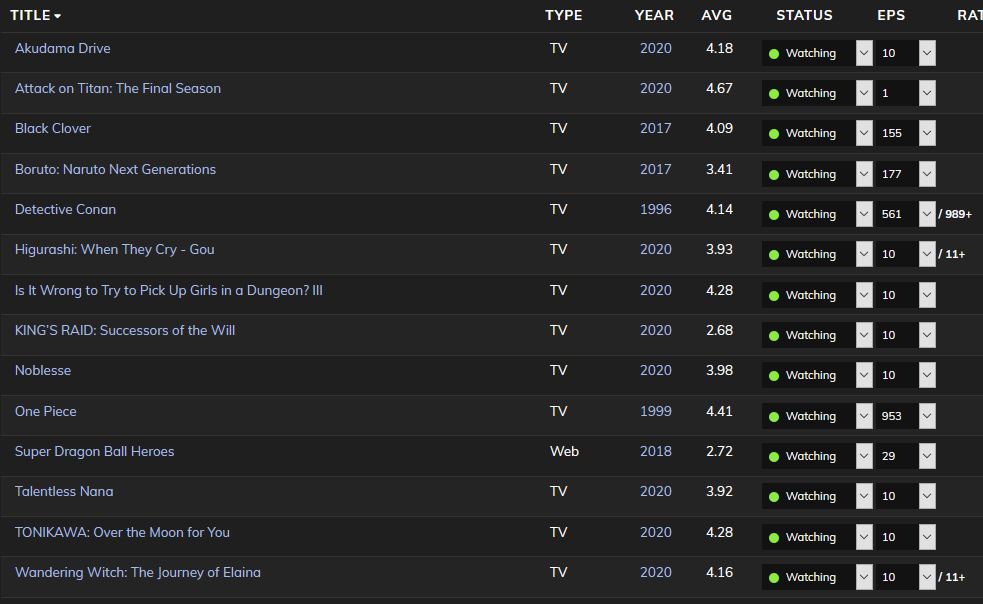 3 more animes for December, but one was 48 episodes, and the other 5 minute episodes.

Nanatsu no Taizai: Imashime no Fukkatsu (24 episodes)- I waited awhile before watching more 7 Deadly Sins. The overarching plot is quite enjoyable, making every episode seems like it counts... that is until the flashback episodes. And the training episodes... as well as the useless powerlevels. Disappointing, but the fights were still enjoyable. The undying can also be an issue, but unlike some anime this one does do it a bit better. I also love that some of my favorite evil characters weren't all that evil and got a lot of screentime as good characters. In the end though, they became useless, in fact most people are useless, especially female characters. Still it ended on a good note. OP was good. meh ED. Decent music throughout.

Nanatsu no Taizai: Kamigami no Gekirin (24 episodes)- The followup was about half flashbacks, half actual plot. I felt like between the flashbacks of all the seasons, they could have made a separate anime with the flashback content. In fact someone should make a guide of following the anime with and without flashbacks, would save some people time. The actual plot was okay, and the animation while poor, didn't really matter that much. The fights ended up with nothing being resolved. I feel that this is an anime that follows the manga very closely, so I can't really blame the anime for that. But yeah I felt like this could have been the last season without flashbacks and without the nonsense pace. Oh well guess another 24 episodes should do the trick. Meh OP and ED. Decent battle music throughout.

Netsuzou Trap -NTR- After 48 episodes of the same anime I needed a breather. This anime is only like 5 minutes long per episode, but it was still entertaining only because of my need for more yuri. So sad that the MC couldn't realize her love for women! I like how there is kind of an evil dude and nice dude, but the evil dude is cool and the nice dude is lame, kind of drives home the point. Sadly this anime won't get a sequel, and I might be too impatient to read the manga. I hope there is more yuri to come. meh OP and ED.

Konosuba Season 1 and 2 (22 episodes) - This show was praised to high heavens and I was slow to watch it, but I can see why. It is nice parody of all the isekai tropes. A comedy that made me laugh quite a few times. I also watched many videos/memes that use a "Explosion!" quote, and I finally get where it comes from. The pervert and an evil character made me laugh to tears, and thinking of the scene makes me laugh even now. It was the peak of the anime, but it was a great one. The goddess is so cute, and annoying, can't imagine how I would act around her. The MC while kind of typical has an uncanny steal ability that makes me wish an adult MMO had something like that. meh OP and ED

Maybe yearly report is next.

Some awesome or interesting Anime (for all guys):

Been watching Mushouku Tensei lately. It's pretty good. It does have too many lewd wtf moments for my liking, but the mystery of the world is interesting and makes you want to keep watching. Last episode (ep 8) ended on an incredible cliff hanger, can't wait for next week.

any Death Note Fans here? It was one of my first anime-highlights in my life. Like story, atmosphere, soundtracks and characters very much.

Even two friends - who never liked anime - thought Death Note was good and then became fans of anime series :D

I didn't complete any anime in January or February, March is also looking slow for me. However I am definitely excited to watch a few shows in the future. I count at least 7 sequels to watch, so that is over 2 months worth.

The most exciting anime this year however would have to be Bleach. It has been too long.

I can't believe this is an actual official anime dub