Fanatical's Black Friday Sale includes a free game, some historic low prices
https://www.pcgamer.com/fanaticals-black-friday-sale-includes-a-free-game-some-historic-low-prices/
The Black Friday sales are underway, and digital retailer Fanatical has plenty of PC games discounted, most of them in the form of Steam keys. As well as the discounts Fanatical is giving away a free game. It's, let me check my notes here, 2019 multiplayer kart-racer Garfield Kart: Furious Racing.
Right now, the sequel to Garfield Kart is sitting on a user rating of 89% positive on Steam, but it's hard to know if that's because it's genuinely better than you might expect from a Garfield-themed racing game or if Steam's users, who have also given it the "Cult Classic" tag, are just being trolls. I was skeptical about Sonic & All-Stars Racing Transformed as well, but it turned out to be one of the best in the genre.
Since it'll set you back precisely zero dollars, if you're at all interested in driving around while pretending to be Garfield, Jon, Odie, Nermal, Arlene, Liz, Harry, or Squeak, whoever those last two are, you may as well find out for yourself. All you have to do is sign up to Fanatical's newsletter and connect your Steam and Fanatical accounts to get a free Steam key.
>> And it also has a a new Star Deal: The Judgment Collection gets a 39% discounts during 24 hours: https://www.fanatical.com/en/game/the-judgment-collection

As part of its Black Friday Sale, the Humble Store has a new 48h deal: Wasteland 3, with up to 71% discounts during 26 hours: https://www.humblebundle.com/store/promo/wasteland-3-black-friday-featured-deals/.

This mod brings Grand Theft Auto 6’s Lucia to GTA: San Andreas
https://www.dsogaming.com/mods/this-mod-brings-grand-theft-auto-6-lucia-to-gta-san-andreas/
Modder ‘SERGIO_VAN_DYK’ has released a simple yet cool mod for Grand Theft Auto: San Andreas, allowing you to play as Lucia from Grand Theft Auto 6.
As the title suggests, this is just a character swap mod. Still, and since GTA6 won’t come out anytime soon, it can at least quench your thirst for it.
>> There's a video of it, but keep in mind that it runs on a heavily moded San Andreas.

Fans working on unofficial remake of classic God of War in Unity Engine
https://www.dsogaming.com/videotrailer-news/fans-unofficial-remake-classic-god-of-war-unity-engine/
Baryonix Studios, a small team of game developers, is working on an unofficial remake of the first God of War game in Unity Engine. Although this project is in a pre-alpha stage, the team shared a WIP video from it.
Now as the title suggests, this is an unofficial remake. As such, don’t expect much from it. My guess is that Sony will send Baryonix a C&D letter (once and if this video goes viral). Furthermore, this is a really early development video. Thus, and even if Sony allows the team to continue working on it, you should not be expecting to be playing it anytime soon.

New SIFU mods allow you to play as characters from Overwatch, The Legend of Zelda, Bioshock & more
https://www.dsogaming.com/mods/new-sifu-mods-allow-you-to-play-as-characters-from-overwatch-the-legend-of-zelda-bioshock-and-more/
It’s been a while since our last look at the character swap mods for SIFU, right? Well, time to share some brand new ones that allow you to play as characters from games like Overwatch, Street Fighter, The Legend of Zelda and Bioshock.
Going into more details, modder ‘User619’ released all of the following mods. Thanks to them, you can play as Laura from Street Fighter 5, Felicia from Marvel vs Capcom 3, Zelda from The Legend of Zelda, Widowmaker from Overwatch or Elizabeth from Bioshock Infinite.
For our shonen anime fans, there are also mods that allow you to play as Goku.
>> There are 6 videos showing the several new characters.

A massively ambitious 20-year-old Morrowind mod adds two major new regions
https://www.pcgamer.com/a-massively-ambitious-20-year-old-morrowind-mod-adds-two-major-new-regions/
Tamriel Rebuilt is an ambitious mod project that aims to add the full mainland of Morrowind to The Elder Scrolls 3: Morrowind, which was set on the large island of Vvardenfell. It's been in development for a whopping 20 years now. The last we heard from the team was via an updated development roadmap in late 2021, but today the developers released a new update that adds two major new regions to the game world: Dominions of Dust, and Embers of Empire.

New trailer for the Unreal Engine 5-powered MMORPG, Legend of YMIR
https://www.dsogaming.com/videotrailer-news/new-trailer-for-the-unreal-engine-5-powered-mmorpg-legend-of-ymir/
Back in January 2022, WEMADE released a tech demo for its upcoming MMORPG that will be using Unreal Engine 5, Legend of YMIR. And last week, the publisher shared a brand new in-game/in-engine trailer for it.

Hogwarts Legacy gets a 20-minute “Autumn” in-engine video
https://www.dsogaming.com/videotrailer-news/hogwarts-legacy-gets-a-20-minute-autumn-in-engine-video/
Warner Bros has released a 20-minute in-engine video for Hogwarts Legacy, focused on an Autumn morning and showcasing some of the game’s environments. This video will give you a glimpse at the game’s visuals, so be sure to watch it.

This former BioWare dev's alternate ME3 ending is canon as far as I'm concerned
https://www.pcgamer.com/this-former-bioware-devs-alternate-me3-ending-is-canon-as-far-as-im-concerned/
Mass Effect 3, the Mass Effect game we were all very upset about until they put out the next one, got a lot of flack for its endings. Fans said they were unsatisfying, that they didn't take your decisions into account, and that choosing between them was anticlimactic. Not unreasonable, but they all miss the real point: Why didn't everyone just kiss and make up?
Violet McVinnie, a former BioWare dev who now heads her own studio, clearly agrees. When she still worked at BioWare, McVinnie had a tradition of creating alternate ending videos for the studio's games that envisioned what would happen if everyone just snogged it out. Here's ME3's.

Hawked is a new extraction shooter looking for playtesters this weekend
https://www.pcgamer.com/hawked-is-a-new-extraction-shooter-looking-for-playtesters-this-weekend/
Hawked is a new PvPvE extraction shooter that sends players off on a quest for treasure and mysterious artifacts on a strange, remote island, where they'll also have to battle aggressive monsters—and each other—in order to get away in one piece, naturally. An early access release is expected in 2023, but if you'd like to get a taste of what it's all about right now, or if you're just looking for something new to play this weekend, you can sign up for the closed alpha test that kicked off today on Steam.

Warhammer 40,000: Darktide puts in some crafting upgrades and nice new cosmetics
https://www.pcgamer.com/warhammer-40000-darktide-puts-in-some-crafting-upgrades-and-nice-new-cosmetics/
The pre-order beta for Warhammer 40,000: Darktide is in full swing running up to release date on November 30th, with developer Fatshark adding new features and making stability improvements as the big launch approaches. Today's update, 1.0.8, makes a number of balance and stability fixes and adds new cosmetics to the Armoury Exchange.

Report says US government will 'likely' challenge Microsoft buying Activision Blizzard
https://www.pcgamer.com/report-says-us-government-will-likely-challenge-microsoft-buying-activision-blizzard/
A new report by Politico says that the United States' Federal Trade Commission is "likely" to go to an antitrust lawsuit to prevent Microsoft from executing its takeover of Activision Blizzard. This is according to sources with insider knowledge of the FTC's operations, who say the FTC's investigation staff is "skeptical" of the companies' arguments.

Build and automate a space colony for profit or freedom in Dawn Apart
https://www.pcgamer.com/build-and-automate-a-space-colony-for-profit-or-freedom-in-dawn-apart/
Promising new colony sim Dawn Apart was announced this week, a sci-fi game drawing from the legacy of Rimworld and Factorio to create a game that simulates an expedition arriving to build automated factories on an alien world. The native aliens, of course, aren't thrilled about that—and your colonists might not be either, after they see how spoiled their new home is becoming.
>> One extra thing about this game: it's voxel based.

American Truck Simulator heads to Oklahoma, where the wind comes sweepin' down the plain
https://www.pcgamer.com/american-truck-simulator-heads-to-oklahoma-where-the-wind-comes-sweepin-down-the-plain/
American Truck Simulator only just released a massive expansion going to Texas—its largest expansion, as everything Texas-related is bigger—but developer SCS Software has announced it's taking us directly north to Oklahoma next, visiting the Sooner State's rolling arid hills and bounteously beautiful pasturage. Not a brand new game! DLC, should be much the same!

All Genshin Impact codes from the version 3.3 livestream
https://www.pcgamer.com/genshin-impact-codes-3-3-livestream/
Genshin Impact codes are one of the big reasons a lot of players tune-in to the livestream that happens every six weeks. We get news from miHoYo about upcoming banners and events in the next version, but can also claim some free currency to use when wishing for the new characters in-game—handy if you're a no-spend player who's been saving up Primogems for one of the upcoming banners.

Sims 4 update purges 'wholly unacceptable content' from its gallery
https://www.pcgamer.com/sims-4-update-purges-wholly-unacceptable-content-from-its-gallery/
EA likes its profanity how it likes its coffee: filtered. No wonder, then, that a recent update to The Sims 4 has taken a scouring brush to the game's gallery, purging it of "wholly unacceptable content" and making updates to the game's profanity filter to prevent people from uploading unwholesome content in future.

Let's check the GOG and Steam deals during the weekend:

And that's all. Until next time, I wish you a happy and gaming weekend.

Actually it can be had for as little as $560 tax free with promo code ZIP11 on Newegg. I even tested it myself on checkout:https://t.co/lOxKKOVkk0 pic.twitter.com/W2TroTGrwt

Meanwhile, Jensen be like discounts? Never heard of the word. 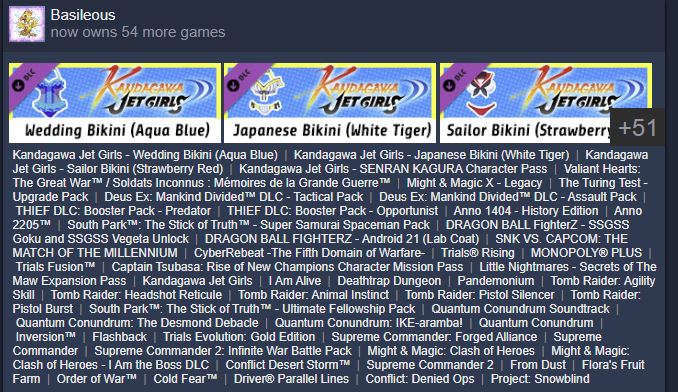 I like how it says "54 more games" when most of them are DLC or bundled games that are like a few cents to a couple of dollars worth.

Was about $150 worth - bought a copy of Mass Effect Legendary Edition to a friend as well.

Not possible, in my opinion. After all, wasn't the card supposed to launch for $899 before getting unlaunched? There's no way Nvidia will actually increase the price.

Kinda begs the question whether to get a 6900XT at that price or wait for a 7800XT. Think the latter will perform quite closely to the former.

I think if you can get it for $560, I'd just buy it. Sure you could wait but no one knows what the future holds. 6900XT for that cheap is an incredible deal anyway you cut it.

Hell I think there's a two free game promo for 6000 series GPUs on top of that where you can get Dead Island 2 and Callisto Protocol for free:

Also don't forget to buy 3dmark if you want to show off your PC. It's on sale:

Yeah if it reaches that price in the UK, I'd be awfully tempted. And that game included bundle is a great deal for two new and unreleased titles.

I think value wise this is probably the best you can get for a high(ish) end GPU, outside of getting into the used market.