So now that my PC is upgraded I intend to use my old parts to help my brother upgrade his rig. Not as fancy as mine but a good bang for the buck gaming PC. He'll have my old case, psu, gpu, and ram. I think he mostly needs a new mobo, cpu, and cooler. What would you guys say is the best value right now for a new mobo+cpu? Preferably something with longevity that he can upgrade in the future if he wants but is still compatible with my ddr4 ram right now. Bonus if it doesn't need a big cooler as my old case is a bit compact for an ATX.

Well if you are dedicated to using ddr4, you won't really get much in terms of upgradability as far as the cpu goes. I'd just try to get a 5800X3D for $329 + MSI Tomahawk B550 or something similar. Alternatively, you can also get 13600k + Z690 MSI Tomahawk DDR4 version which gives PCI-E Gen 5 for the GPU which costs more however it's also more futureproof. Neither will really allow your brother to have any meaningful upgrades in the future so both platforms are more so set it and forget it sorta deal.

You can also search around for cheaper motherboards, just stay away from Gigabyte and Asrock imo.

Hmm hard to say seeing as most DDR4 based systems are EOL in terms for forward compatibility with DDR5 and PCI-e 5 being the new standard going forward. I would look into a AM5 build if forward compatibility is a concern. With Zen 4 CPU's receiving a big price drop, B650's out and cheaper DDR5 kits available. A 7600X might be worth considering. Maybe something along the lines of this https://pcpartpicker.com/list/hJBcv3

The Epic Store, that also has its own Black Friday Sale until November 28, is giving away only on title: STAR WARS: Squadrons: https://store.epicgames.com/en-US/p/star-wars-squadrons.
And next week, the free game will be Fort Triumph and RPG in a Box.

Fanatical has a new Star Deal: Assassin's Creed Valhalla - Complete Edition, with a 70% discount during 24 hours. The keys are for UPlay: https://www.fanatical.com/en/game/assassin-s-creed-valhalla-complete-edition.

The Elder Scrolls III: Morrowind Mod Tamriel Rebuilt adds two new expansions & 200 quests
https://www.dsogaming.com/mods/the-elder-scrolls-iii-morrowind-mod-tamriel-rebuilt-adds-two-new-expansions-200-quests/
The team behind Tamriel Rebuilt, a DLC-sized mod for The Elder Scrolls III: Morrowind, has released a brand new version of it. According to the team, this release adds two major expansions to the game world.
Tamriel Rebuilt is a mod for TES III: Morrowind that adds the mainland of the province to the game. The two new major expansions are Dominions of Dust and Embers of Empire.
Dominions of Dust is mostly a sparsely inhabited and dangerous borderland to Vvardenfell’s southwest, in contention between Great Houses Hlaalu and Redoran. The exception is the city of Andothren, a huge Hlaalu trade port on the Inner Sea. Embers of Empire completely overhauls the western shore of the Telvanni peninsula with its Imperial settlements of Firewatch and Helnim.
Combined, the two expansions include new land areas three times the size of TES III: Bloodmoon. Additionally, they offer about 200 new or overhauled quests, finally bringing the total quest count of Tamriel Rebuilt to parity with the vanilla game and expansions.

Make Hitman 3 a mystery game with a mod that gives you four suspects and only one right target
https://www.pcgamer.com/make-hitman-3-a-mystery-game-with-a-mod-that-gives-you-four-suspects-and-only-one-right-target/
My favourite Hitman 3 level is Dartmoor. It might be because I'm English so I'm biased to see some home turf on the board, but actually it's because it's the murder mystery level of the game. I love a good murder mystery. I adore uncovering the secrets behind the motives of each person in a room before nailing the criminal in a lengthy monologue, Agatha Christie style. I thought that element of mystery worked really well with Hitman 3 and now there's a mod which delivers even more of that sensation.
The Minilancer mod on NexusMods combines detective work with assassination. The mod's purpose is to provide you with four different NPCs, each one of whom could be the target you've been sent to kill. Diana is probably on holiday or something. Can't get the staff these days, can you?
This means that Agent 47 has to wander the map looking for clues that will narrow down the options so that, when you do get down to what you came here to do, you pick the right one and don't assassinate an innocent. Which, obviously, none of us have accidentally done in Hitman anyway right? Right?

New Skyrim high-poly garlic mod has way more optimized vertices than the last high-poly Skyrim garlic mod
https://www.pcgamer.com/new-skyrim-high-poly-garlic-mod-has-way-more-optimized-vertices-than-the-last-high-poly-skyrim-garlic-mod/
Finally: the mod of mods for Skyrim. See, this game has a big problem. Rough-angled, poorly textured, badly colourised garlic bulbs. It's a disgrace. Modders have previously attempted to address this issue but now here comes the real deal, Garlic: The Garlic mod.
Created by wskeever Garlic: A Garlic Mod addresses the two types of garlic found in the world of Skyrim. There's garlic sitting on plates, and garlic hanging together in braids. Bethesda's garlic is pisspoor to the extent it looks more like onions, with yellow-orange colouring and notable ridges across the surface.
What were you playing at, Todd? Did you really think this garlic was good enough for the gamers?

Call of Duty: Modern Warfare 2 & Warzone 2.0 November 22nd Update Release Notes
https://www.dsogaming.com/patches/call-of-duty-modern-warfare-2-warzone-2-0-november-22nd-update-release-notes/
Activision has shared the full changelog for the November 22nd Update for Call of Duty: Modern Warfare 2 and Warzone 2.0. According to the changelog, this update fixes a number of issues and exploits.

The Callisto Protocol will be using Denuvo, PC requirements revealed
https://www.dsogaming.com/news/the-callisto-protocol-will-be-using-denuvo-pc-requirements-revealed/
KRAFTON and Striking Distance Studios have revealed the official PC system requirements for The Callisto Protocol. In addition, the publisher has updated the game’s Steam store page, revealing that it will be using the Denuvo anti-tamper tech.
>> And it gets kind of worse. See part two of the news for that.

Netflix wants to make a 'triple-A' PC shooter
https://www.pcgamer.com/netflix-wants-to-make-a-triple-a-pc-shooter/
Netflix, that thing you only have thanks to a parent's or ex's password, is getting into the "triple-A PC game" business. That's according to https://jobs.netflix.com/jobs/243929231">a job listing for a game director on the company's website, which also hints that the game Netflix has in mind will be a live service shooter.

Here are all the Game of the Year awards you can vote for in 2022
https://www.pcgamer.com/here-are-all-the-game-of-the-year-awards-you-can-vote-for-in-2022/
As the inexorable march of time makes mockery of us all, perhaps you'd like to take a moment to vote on which games were good this year? I know I would.
2022 is shaping up to be a big one in videogames history, with a boatload of games out that have the potential to be lifetime experiences for nerds and career-defining releases for developers. We had games like Elden Ring, Total War: Warhammer 3, Uncharted, Persona 5 Royal, and God of War, and that's just in the first few months of AAA releases. Not even touching the littler games like Return to Monkey Island, Immortality, Rollerdrome, NORCO, Hardspace: Shipbreaker, Rogue Legacy 2, HYPER DEMON...

Congratulations! Destiny 2 players have cheesed a community event meant to last weeks in 1 day
https://www.pcgamer.com/congratulations-its-taken-destiny-2-players-1-day-to-cheese-a-community-event-that-was-supposed-to-take-weeks/
Two things are certain in Destiny:
1) The development team will come up with increasingly esoteric reasons for players to head back into activities they've already beaten thousands of times.
2) The players will find the quickest, cheesiest path of least resistance between them and the rewards being dangled.

Vampire Survivors is getting a 'Tiny Update' with a new level and character
https://www.pcgamer.com/vampire-survivors-is-getting-a-tiny-update-with-a-new-level-and-character/
When Vampire Survivors left early access in October, developer poncle said it would probably start working on something new, but promised that "support for VS will also carry on." Today it followed through on that promise with the announcement of the 1.1.0 "Tiny Update," which actually sounds pretty big to me.

The Callisto Protocol will sell you extra death animations as DLC
https://www.pcgamer.com/the-callisto-protocol-will-sell-you-extra-death-animations-as-dlc/
Science fiction horror game The Callisto Protocol has been marketed as a spiritual successor to Dead Space, vowing to go gorier and nastier than the series it's inspired by. We know a lot about The Callisto Protocol, but we today we learned more about its several bits of expansion content on the way post-release.
One of those things is that the game's DLC packs will include lots of additional gross-out death animations for both protagonist Jacob and the nasty monsters he fights. They're sort of like skins for his armor—they actually come bundled with armor skins—and there are 25 of them in total: 13 new Jacob deaths in the Contagion Bundle, and 12 enemy deaths in the Riot Bundle. Both bundles are included with the Season Pass, which is part of the Digital Deluxe Edition, available for a mere $20 more than the standard edition.

Warzone 2 crashes are tormenting players, especially in DMZ
https://www.pcgamer.com/warzone-2-crashes-are-tormenting-players-especially-in-dmz/
Warzone 2 is fun, especially the new DMZ extraction mode, but for some players, frequent crashes are causing gutting losses. "This is the sixth time I lost maxed out loot," lamented one DMZ player on Reddit after a crash, and they're far from the only Warzone player who's seen the dreaded "this application has unexpectedly stopped working" message recently.

Riot disables League of Legends hero who can turn into a one-shot death tower (but isn't supposed to)
https://www.pcgamer.com/riot-disables-league-of-legends-hero-who-can-turn-into-a-one-shot-death-tower-but-isnt-supposed-to/
Riot Games has temporarily disabled League of Legends character Neeko after she unexpectedly developed the ability to transform into a massive tower that can kill enemy players in a single shot.

Early access game The Last Leviathan is about to be delisted
https://www.pcgamer.com/early-access-game-the-last-leviathan-is-about-to-be-delisted/
GOG.com has announced that The Last Leviathan, a fantasy ship-builder frequently summed up as 'Besiege but with boats', is about to be removed from sale. "We'd like to inform you that, due to publisher's request, The Last Leviathan will be delisted from our catalog on Thursday, November 24th, 4 PM UTC", GOG says. "For everyone who purchased this title prior to delisting, it will remain in their GOG library."
>> Apparently, the game hasn't been updated since 2019...

EA is real sorry it called that guy 'milkshake brain'
https://www.pcgamer.com/ea-is-real-sorry-it-called-that-guy-milkshake-brain/
After a raucous spate of now-deleted tweets, the official Need For Speed Twitter account has woken up with a head full of regrets. After insulting a fan who criticised the upcoming Need For Speed: Unbound, the account has posted an official apology and promised to do better, which presumably means it won't call someone "milkshake brain" ever again. I don't think we have ever been in a situation of this magnitude lads. Simply insane!

Era of OLED monitors bois, least in the top end

As both Yuri and hinch said, your brother won't have much room for upgrades down the line if you stick with that DDR4 memory, but that doesn't mean that he can't have a great DDR4 based system, without worrying about a CPU upgrade down the line.

If it helps, GamersNecujs has published its best CPUs of 2022. You or your brother may get some ideas from it:

Looks like the studio brought the EA cancer with them 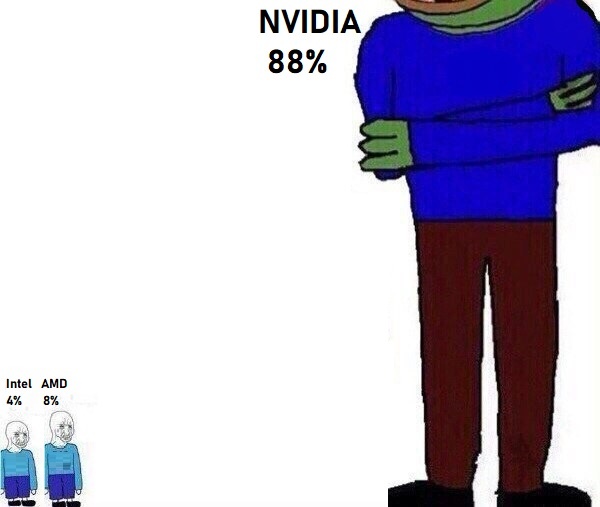 Nvidia when AMD was competitive in Raster but not Ray Tracing: