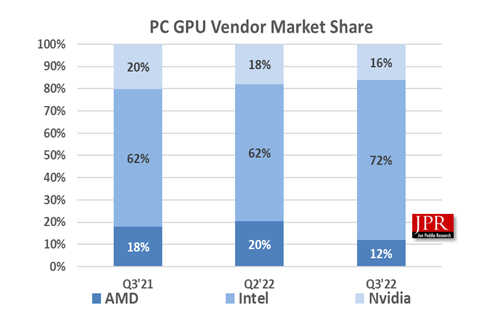 That of course includes iGPUs. They will likely show their dGPU only market share in a follow up article but suffices to say, if you are in the camp of Nvidia GPUs only sold so much because of mining, it's time to rethink that assessment.

How AMD is Fighting NVIDIA with RDNA3 - Chiplet Engineering Explained

It's mainly just architectural talk with their lead engineer and what it sounds like to me is they tried to push chiplets onto their GCD similar to what they did with Ryzen but the requirements of using chiplets in GPU die was much higher than CPU. So instead, they settled for MCD which is their infinity cache instead. The connectors they used is insanely fast but still not fast enough to overcome the bottlenecks a full chiplet GCD requirements. The main benefit that RDNA 3 has is of course, decreasing the die space and going forward, they can reuse the MCD from RDNA 3 onto RDNA 4 if they so chose as the MCD is decoupled from the GCD.

Overall my thoughts is that RDNA 3 was an experiment to try and make their GPU into another Ryzen but that didn't quite pan out the way they were hoping. We will see the implications of this during the reviews but while the die size is 306mm, the full die including MCDs is 533mm. 4080 is 379mm while 4090 is 608mm. If the 7900XTX ends up performing closer to 4080, then it's a failure but if it performs similar to 4090, then it's a success.

Simply horrible. Hopefully they will improve it significantly otherwise TSMC will remain dominant

"Update: PCGamesHarware claims that Ryzen 7000 price cuts are only for the Black Friday Week sales. Therefore, those are time-limited offers."

AMD is certainly stuck between a rock and a hard place and the only thing that can save them is their architecture. They need to pull of what Nvidia has done in the past, just in both CPU and GPUs where they need to come out with massive improvements while being on worse nodes or wipe Intel off of the performance crown on the latest nodes. They cannot be in a position where they are charging a lot while being slower in virtually every area, especially in the CPU space where a lot of people just buys one CPU and uses for a long time.

Otherwise the wafer prices will continue to increase and not even the likes of Apple can negotiate with TSMC to bring that down.

It's not quite comparable since the memory controllers have a much lower transistor density. If the die was monolithic on 5nm, it'd be like ~460 mm2.

Regardless... I'm surprised with the poor scaling in this gen relative to the number of transistors on both sides. It was always more or less linear, even across architectures, but now it's scaling to its square root (even the 4090, with a small deviation, suggesting it's only being bottlenecked a little). Is there some distinct sort of logic gate on 5nm that is being counted as a "transistor" in press slides, like the multiple fin configurations on 3 nm? It can't be just memory cells given the density of the main Navi 31 chip...

My Godness. You have more AC games than I do. Impressive.

Ubisoft must be happy with you.

That's a real shame, and a perfect example of why monopolies are bad.

AMD will be able to manage the increase on their CPUs thanks to the chiplet design, as explained by the GN video, but when it comes wo GPUs, both AMD and Nvidia will have no other option but to raise the price. Which sucks for us.

Least there's some hope for the future...

It's good that Samsung has managed to get so many customers on board with their 3nm chips, but they better increase those yields because, at 20%, those customers won't last long.

Anyway, the training for the X-mas Sale has started

And with it, also the Steam Awards.

In case the NFT and crypto crash didn't tip you off, the metaverse ain't getting here any time soon:

My gaming buys this winter will likely be:

I dont know about Ubisoft, but I'm sure happy only having to pay like $15 to $25 for every Gold/Complete edition lol.

Nice. I preordered The Calliisto Protocol as well, on PS5. Hopefully its great.. looks awesome from all the previews and trailers so far.

Hoping there's some more sweet deals for Black Friday as well, on Steam and CDKeys.