GOG has some new deals, some with the same theme:

Now that the Spring Sale is over, the Humble Store has five new sales:

Fanatical has a new bundle and a contest:

Behold the Skyrim mod you didn't know you needed: 4K cages
https://www.pcgamer.com/uk/behold-the-skyrim-mod-you-didnt-know-you-needed-4k-cages/
The Elder Scrolls V: Skyrim is 10 and a half years old, but it's still so popular that it regularly dominates the most-downloaded mods on NexusMods, with the occasional interloper from Fallout 4 or Blade & Sorcery. Exactly how popular does that make Skyrim? Popular enough that 9,000 people were psyched this week to upgrade the cages scattered around its world with new 4K models.
"JS Common Cages SE" was the most downloaded mod on Nexus last week, made by longtime Skyrim modder JohnSkyrim. Common Cages does not have a complex pitch. The cages you'll find animals, prisoners, and (probably most commonly) skeletons hanging out in? Well, they'll look better now.

NVIDIA RTX3080 can’t run Hitman 3’s Ray Tracing effects smoothly even at 1440p with DLSS Performance [UPDATE: DLSS Glitch/Bug]
https://www.dsogaming.com/news/nvidia-rtx3080-cant-run-hitman-3s-ray-tracing-effects-smoothly-even-at-1440p-with-dlss-performance/
IO Interactive has just released the Ray Tracing patch for the PC version of Hitman 3, and boy do these RT effects require a high-end GPU. As we’ve already reported, IO Interactive has used Ray Tracing in order to enhance the game’s reflections and shadows. And, from what we can see, even an NVIDIA RTX3080 is unable to run these RT effects smoothly at reasonable resolutions.
UPDATE:
It appears that this underwhelming performance was caused by a DLSS glitch/bug. Right now, the game can run with constant 60fps at 1440p/Ultra/Ray Tracing with DLSS Quality Mode. We don’t know what caused this DLSS issue (as we haven’t made any changes to our PC test system since yesterday). Nevertheless, it’s good news that the game can run smoothly at 1440p with DLSS.

No Man’s Sky Leviathan Update 3.90 released, full patch notes revealed
https://www.dsogaming.com/patches/no-mans-sky-leviathan-update-3-90-released-full-patch-notes-revealed/
Hello Games has released a brand new update for No Man’s Sky. According to the release notes, the Leviathan Update 3.90 adds the seventh expedition, Leviathan. Moreover, it comes with a number of game fixes.

Here's when Sniper Elite 5 unlocks in your time zone
https://www.pcgamer.com/uk/sniper-elite-5-release-time-unlock-pre-load/
When Sniper Elite 5's release time arrives in your region, I'm sincerely fearful for the innards of the poor sods that find themselves in your crosshairs. Lungs, hearts, and testicles, are set to be punctured en masse like balloons at a children's party. Of course the killcam isn't everything (just mostly everything): Rebellion's promising improved gun physics, plenty of customisation, and more.

'Ideally it melts your face off' says Destiny 2 dev about Solar rework
https://www.pcgamer.com/uk/ideally-it-melts-your-face-off-says-destiny-2-dev-about-solar-rework/
Season of the Haunted goes live in Destiny 2 in just under an hour, and thanks to a leak from the Japanese arm of Bungie's new paymasters at Sony, we now know quite a bit about it. What had been missing from the splurge last night, though, was details of the rework to the Solar subclasses. That's now here in the form of a developer insight video in which Bungie's designers showcase some of the fiery new abilities the guardians will be wielding.

This Chinese indie RPG brings 'wuxia games of the MS-DOS era' to Unreal Engine 4
https://www.pcgamer.com/uk/this-chinese-indie-rpg-brings-wuxia-games-of-the-ms-dos-era-to-unreal-engine-4/
Chinese indie studio Xiameng has unveiled a wuxia-style pixel art RPG called Codename: Wandering Sword that casts players as a young man from Liao City who finds himself trapped in a feud between two rival clans.
>> You could also compare its style with Octopath Traveler.

Battlefield 2042's take on Hunt: Showdown is 'winding down'
https://www.pcgamer.com/uk/battlefield-2042s-take-on-hunt-showdown-is-winding-down/
One of the major talking points about Battlefield 2042 ahead of its release was the Hazard Zone mode. Heavily inspired by Hunt Showdown, it dropped players into four-member squads, with each vying for possession of Data Drives hidden throughout the map. To paraphrase our review, it was fun, though a little shallow compared to its source material.
It seems the Battlefield 2042 playerbase, as small as that may be nowadays, feels the same way. In a new development update mostly focused on forthcoming season 1 changes, DICE has announced that it will cease active development on Hazard Zone, though the mode will still be available as-is for those who want to keep playing it.

Warhammer 40,000: Chaos Gate – Daemonhunters update gives wounded Grey Knights more grit
https://www.pcgamer.com/uk/warhammer-40000-chaos-gate-daemonhunters-update-gives-wounded-grey-knights-more-grit/
While Warhammer 40,000: Chaos Gate – Daemonhunters certainly seems to have given players the XCOM-but-with-space-marines experience they were looking for, those players have been critical of its performance, even on quite high-end rigs. They've also complained about how long your Grey Knight marines can stay wounded for. An unlucky start can lead to a death spiral as you're forced to send suboptimal squads on missions, who then get wounded themselves and join the lengthening infirmary queue.
Daemonhunters' latest patch, Update V, should alleviate some of those issues. It includes an optimization pass on the ship's HUD and all the ornate technogothic objects on display in its various rooms, as well as the combat HUD. Draw distances have been reduced and debris pool loading updated, and with luck all that should help you squeeze out a few extra frames per second.

You can customize your Sims' pronouns now
https://www.pcgamer.com/uk/you-can-customize-your-sims-pronouns-now/
With same-sex relationships a possibility since the first game in the series back in 2000, The Sims spearheaded queer representation in gaming. It's not always been perfect, with same-sex couples restricted to "joined unions" rather than marriages in The Sims 2 for instance, but it's been there. One area where it was still lacking in terms of representation is gender, with default pronouns applied based on players' chosen body type. That's changed as of an update (opens in new tab) adding customizable pronouns to The Sims 4.

Dune: Spice Wars roadmap teases multiplayer, a mystery faction and whole bunch more
https://www.pcgamer.com/uk/dune-spice-wars-roadmap-teases-multiplayer-a-mystery-faction-and-whole-bunch-more/
Dune: Spice Wars seems to have had an enviable early access launch, with no disasters and a largely positive response from players—at least the ones who can be bothered to leave Steam reviews. Funcom's now building on that launch with a series of updates, starting this summer, that have been teased in an early access roadmap.

Don't worry, AMD is still supporting overclocking across all AM5 boards

"AMD has confirmed that its most affordable B650 motherboard chipset will support overclocking of its Zen 4 processors. "

Well that's a relief. I guess they were trying to upsell people to X670 or something. Regardless of which, it's great news.

It could just be a single core boost so I wouldn't put too much stock into it. But AMD does seem to be making a big deal out of their overclocking which is interesting. Zen 1-3 all have been shat overclockers. So hopefully, that will change with Zen 4 and if it does, then 15% will be conservative.

Probably the first time LG has rebranded their own TV as a gaming monitor. Typically they hand it out to 3rd parties to rebrand them. But it's weird they did it with their 48 inch and not their 42 inch. If they can disable that shat Auto Dimming function, then it may be worth it but until then, since Samsung has their QD-OLED monitors that don't have the Auto Dimming nonsense, I'd skip.

Certainly good news. Maybe it's what the article says, if the X670E is for "Extreme Overclocking" and the X670 is for "Enthusiast Overclocking", then what was left for the B650? "Mediocre Overclocking"?

Not according to Ian Cutress in the tweet: "Most threads around 5.5, depends on scene/game" & "5.2-5.5 on all threads was common on the game". It doesn't seem to be a single core boost.

I think they could have just put in "Overclocking Support" and left it at that where as not putting in anything is kind of miss leading.

His tweet is kind of vague because of how it ranges from 5.2 to 5.5 depending on the scene/game. In my experience with the 5950x, when you play a game like Starcraft 2 and you monitor through hwinfo, you can see the frequencies of the cores reporting at 4.7-5ghz on all core but in reality, it's doing that because the game is very single threaded heavy and the other threads aren't being utilized. Then when you run something like Cinebench multicore, it drops down to 4.5ghz all core in my setup. So 5.2ghz all core I can see but I'll see it to believe it if it can run 5.5ghz all core in heavy workloads without manual OC.

Cause otherwise in the demo, they could have shown the stats of all their cores individually instead of just the default.

I agree that if both higher end chipsets had a note about overclocking, the low end one should have had one as well, if only to reassure future buyers that it was still possible to do it. It's a marketing mistake from AMD.

And well, Cinebench is not a game, is it? Not all the cores are used at the same time nor at 100% load in any game. That's why the frequencies will vary not only from game to game, but also in a game depending on what's going on in the screen.

Yea but that's what I meant by "It could just be single core boost so I wouldn't put too much stock into it" cause for all we know, during that scene where it hit 5.5ghz, it wasn't under heavy load. But I probably could have worded it better. 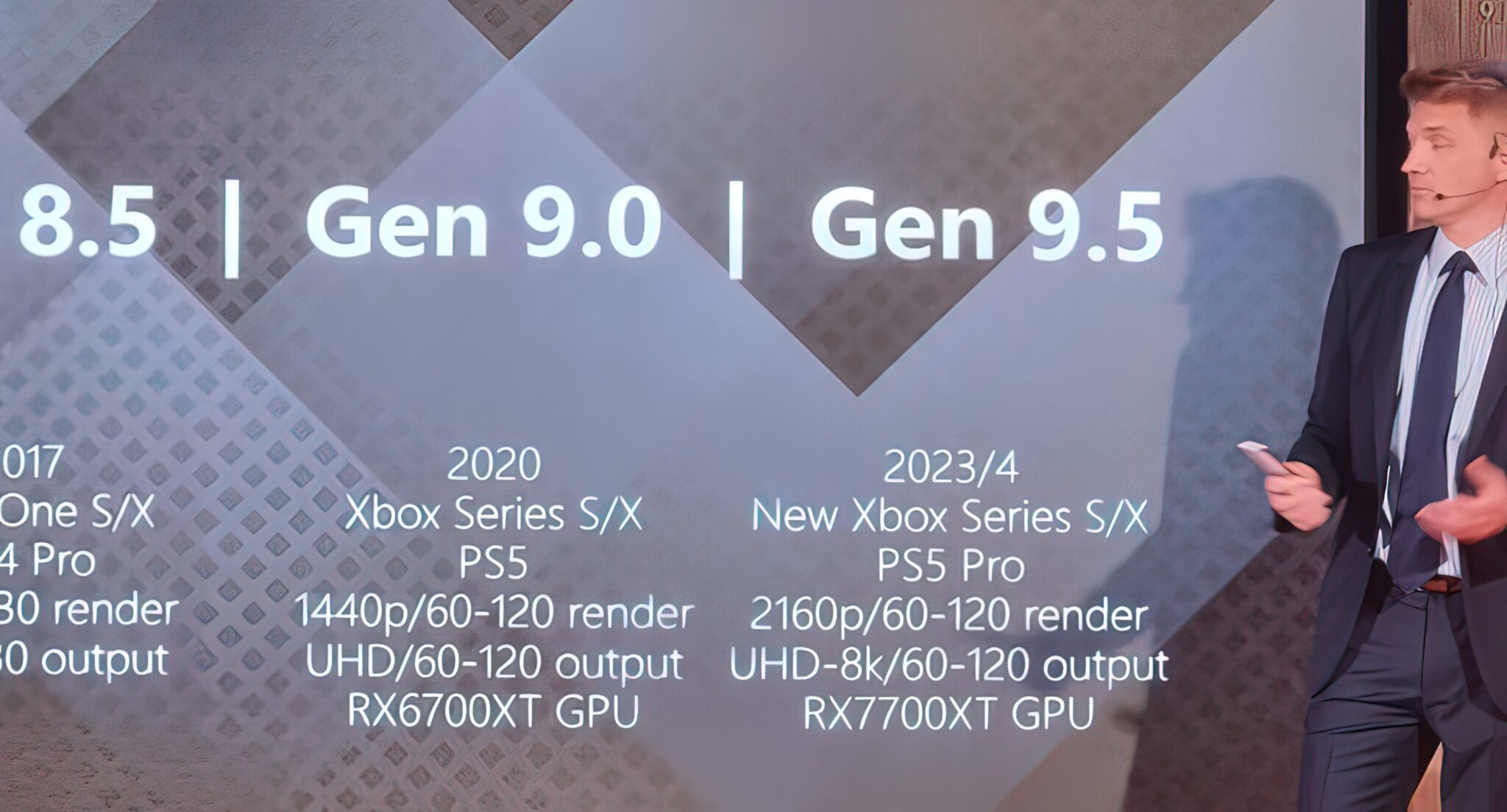 I'd take this with copious amounts of salt as it's highly unlikely that Sony/MS are sharing their plans with TCL. I can see 7700XT GPU coming out next year though.

Looks like speculation/estimation to me. Doesn't make much sense though considering that there's still supply/semiconductor issues currently and they can't even fulfill demand of consoles, at least for PS5's. I'd think maybe 2025 or thereabouts..

7700XT should be roughly inline with the 6800XT I would imagine... So not a catastrophic leap over the current Series X/Playstation 5 unless they chase clockrates.

The big boon will of course be in Ray Tracing... And maintaining higher framerates/resolutions where the current gen consoles struggle.

Also along the PC enthusiast rumor mill (Grain of salt) is that AMD will be regressing back to their VLIW paradigm with RDNA3 that they defined with the Radeon HD 2000/3000/4000/5000/6000 series. But it will be more along the lines of VLIW2 rather than VLIW5 or VLIW4... And that would make these parts extremely compelling from a compute standpoint.