"AMD will be presenting more about this effort next month at XDC."

I am continuously more and more interested in the Steam Deck!

"Dell XPS 9510 already offers one of the slowest implementations of RTX 3050 Ti Laptop GPU with an official TGP of 45W, however, this value appears to be lowered almost instantly to 35W in gaming, resulting in nearly 20% loss in performance."

Now while this isn't a gaming notebook, it is still quite bad. Especially if Dell is advertising a 45 watt TGP but in actuality, is shipping a 35 watt TGP. And of course, a 3050 Ti wasn't very good to begin with.

Still a long ways to go! But least some games are starting to be playable.

This does eventually make it's way into USB like Thunderbolt 3/4 has so future be exciting.

Did the bot just...? pic.twitter.com/PYkaANHD3l

Unless you wanted to watch movies in 4K on the monitor or need the high amount of pixels for other stuff than for gaming (like photo editing), I think a 1440p would be much better suited for you.

Just for curiosity, is it an IPS or a TN monitor? I remember there were quite a few 4K TN monitors a few years ago, some even with good (8-bit) panels, and they weren't as expensive as their IPS counterparts, but they seem to have disappeared as of late.

I wonder if the lessons learned from that Linux study could also be applied for Windows. I'd bet that it's something AMD would be very interested in.

And WTF is going on with Dell as of late? AMD getting the short stick with their GPU configurations, GPUs with capped shaders, now GPUs with limited power,... have they fired all the tech guys for the marketing team or are they trying to sabotage the company from inside? 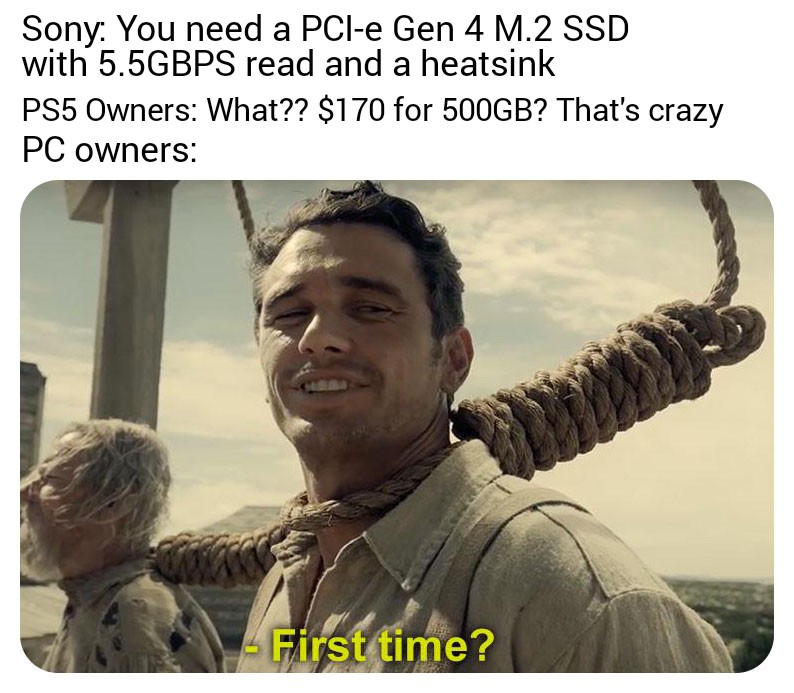 So for most console owners it won't be the first time.

I don't watch movies at all, but I play old games which is why 4k is even a consideration.

My most played game is StarCraft 2 and I am sure a 3060Ti can handle that in 4k. Overall it is very rare that I am going to play something that is not more than 5 years old. And if its a recent game its probably some indie stuff.

Battlefield 5 is now available for free on Amazon Prime Gaming
https://www.dsogaming.com/news/battlefield-5-is-now-available-for-free-on-amazon-prime-gaming/
Amazon Prime Gaming is currently offering Battlefield 5 for free. From today and until October 1st, Prime members can grab its Standard Edition. Once you grab the game, you’ll keep it yours forever, and can play it whenever you want.

GOG gets a new release: Riddle of the Sphinx™ The Awakening (Enhanced Edition) arrives with a 25% discount until the 10th of August: https://www.gog.com/game/riddle_of_the_sphinx_the_awakening

Steam has several new deals and a new range of weeklong deals:

Star Wars Redemption Fan Demo is now available for download
https://www.dsogaming.com/news/star-wars-redemption-fan-demo-is-now-available-for-download/
Back in 2017, we informed you about a Star Wars fan project, Star Wars Redemption. And today, we are happy to report that Etienne Beschet has released a playable demo for it.
Star Wars Redemption is using Unreal Engine 4 and is inspired mostly by the clone wars TV series. From the looks of it, this is a third-person game. (...)
As its creator claimed, this demo can be resource-heavy. Although it does not use any Ray Tracing effects, Beschet recommends using at least a GTX 1070.
You can download it from here. Do note that you’ll need an ArtStation account in order to download it.

Stardew Valley's biggest mod now lets you become friends with Shane's chicken
https://www.pcgamer.com/uk/stardew-valleys-biggest-mod-now-lets-you-become-friends-with-shanes-chicken/
Stardew Valley is a very good game that its creator is working tirelessly on, but so are the game's modders. The biggest fan-made mod, Stardew Valley Expanded, keeps growing, too. Patch 1.13.9 brings a lot of changes, but there's one I reckon anyone would be excited about. Charlie, Shane's prized chicken friend, is now an NPC, meaning that it will follow Marnie, Jas, and Shane around once you've cleared Shane's eight heart event. Another character has also been turned into a non-social NPC, but creator FlashShifter has kept that one a surprise. Who wouldn't want to see more of Stardew's knobbly animals on a day out in town?
>> You'll find it at Reddit.

Take-Two’s CEO comments on the recent Grand Theft Auto Mod takedowns
https://www.dsogaming.com/news/take-twos-ceo-comments-on-the-recent-grand-theft-auto-mod-takedowns/
Last month, Take-Two took down numerous GTA mods, including GTA Underground and Kadakash’s AI-upscaled HD Mod for GTA: San Andreas. And during its recent investor call, Take-Two’s CEO Strauss Zelnick commented on those takedowns.
Zelnick claimed that while Take-Two is flexible, it will take down any mods that threaten its economy or when there is bad behavior.
>> I fail to see how mods for San Andreas can hurt their economy, unless they plan to launch remasters/remakes to fill the gap until GTA 6 launches.

Konami’s eFootball Autumn launch is basically a demo release
https://www.dsogaming.com/news/konamis-efootball-autumn-launch-is-basically-a-demo-release/
Last month, Konami announced that its Pro Evolution Series will be called eFootball and will be a free-to-play game. And while the company aims to release the game in early Autumn, this release will basically be a demo launch and nothing more.
>> Everything we know about this game makes it better and better. /sarcasm.

Halo Infinite battle royale? Dataminers think they've found proof
https://www.pcgamer.com/uk/halo-infinite-battle-royale-dataminers-think-theyve-found-proof/
With a build of Halo Infinite now out in the wild, dataminers have already begun diving for secrets within the games files. Now, one reckons they've found evidence of a battle royale mode courtesy of a single voice line from the game's multiplayer announcer.

Minecraft's most anarchic server brought to its knees by griefers
https://www.pcgamer.com/uk/minecrafts-most-anarchic-server-brought-to-its-knees-by-griefers/
The public-facing side of Minecraft is the jolly, happy one. This is where we coo at people recreating the world of the Lord of the Rings, or admire the incredible visual tricks that can be pulled off with a little ingenuity. But then there's the less well-known (though often no less popular) side, where things all get a little grimmer.
>> Warning, it's a very long article with a lot of recap.

Tales of Arise has fishing and farming, and a demo is on the way
https://www.pcgamer.com/uk/tales-of-arise-has-fishing-and-farming-and-a-demo-is-on-the-way/
Recently, Tales of Arise Producer Yusuke Tomizawa held a live Q&A and showed off some new features for the upcoming Tales RPG for the first time. The stream, which you can find on the official Japanese Tales Youtube channel in its entirety (alas, no subtitles), revealed some choice bits of info and includes some previously unseen footage including a skit that you can watch above. (There's a version with Japanese voice acting and English subtitles here).

Former Elder Scrolls devs announce 'Grand RPG' The Wayward Realms
https://www.pcgamer.com/uk/former-elder-scrolls-devs-announce-grand-rpg-the-wayward-realms/
Back in 2019 we learned that veteran developers Julian LeFay and Ted Peterson, leads on The Elder Scrolls Arena and Daggerfall, had founded a new studio, OnceLost Games. At the time they said they were working on a new RPG, though they didn't give out many details and haven't said much since. Today that silence was broken.

Bannerlord patch adds duel mode for multiplayer, ironman for singleplayer
https://www.pcgamer.com/uk/bannerlord-patch-adds-duel-mode-for-multiplayer-ironman-for-singleplayer/
A new Mount and Blade 2: Bannerlord patch has dropped, bringing a heap of changes and fixes to the open world RPG. Most of the changes have been tested in beta for the past month or so, but they've now been patched into the game proper. Just as a squire becomes a knight, so too do these once-young fixes become public.

Gearbox confirms early 2022 release for Tiny Tina's Wonderlands
https://www.pcgamer.com/uk/gearbox-confirms-early-2022-release-for-tiny-tinas-wonderlands/
2021 has seen game after game delayed to later in the year or into 2022, but currently Tiny Tina's Wonderlands, Gearbox's upcoming Borderlands spin-off, is sticking to its target. When Wonderlands was announced back at E3, Gearbox said it should be out in early 2022. Monday's Take-Two quarterly earnings report reiterated that window.

Take-Two confirms it's announcing a new game soon. Will it be Marvel XCOM?
https://www.pcgamer.com/uk/take-two-confirms-its-announcing-a-new-game-soon-will-it-be-marvel-xcom/
2K is getting ready to announce a new game, and we have a good guess at what it could be. Parent company Take-Two held its quarterly earnings report today and mentioned that 2K will have a "new franchise" to unveil this month, with the release following not too far behind: it'll be out by the end of this fiscal year, which wraps up in March 2022. And that leaked turn-based Marvel game from Firaxis sure seems like a good fit.

Take-Two boss says inclusion and diversity are of 'paramount importance'
https://www.pcgamer.com/uk/take-two-boss-says-inclusion-and-diversity-are-of-paramount-importance-in-games-industry/
During a Take-Two earnings call today, CEO Strauss Zelnick addressed questions about how the company deals with issues of diversity and harassment, in light of the recent lawsuit against Activision Blizzard.

GTA Online players are walking in endless circles to earn free stuff
https://www.pcgamer.com/uk/gta-online-players-are-walking-in-endless-circles-to-earn-free-stuff/
If you've ever played GTA Online, it probably won't surprise you to learn that its most dedicated players will do anything and everything they can to get the newest, shiniest stuff on offer. In last month's Los Santos Tuners update that added new clothes and car paint jobs, players discovered that one of the best ways to get ahead is to simply not play. Or, more specifically, go AFK and make the game think you're still playing.

Splitgate dev 'can't just buy more servers' to deal with exploding player numbers
https://www.pcgamer.com/uk/splitgate-dev-cant-just-buy-more-servers-to-deal-with-exploding-player-numbers/
Splitgate, an arena FPS that's basically Halo with portals, has quite literally become a victim of its own success. Having already postponed its departure from early access while it sorts out server issues, developer 1047 Games this weekend tried to explain why the solution isn't as simple as buying more servers.

Tencent stocks plunge amid fears of a Chinese government gaming crackdown
https://www.pcgamer.com/uk/tencent-stocks-plunge-amid-fears-of-a-chinese-government-gaming-crackdown/
Early on Tuesday the stocks of several gaming companies, Tencent among them, fell sharply by up to 11% at Hong Kong markets, after the Propaganda Department of China's Communist Party announced at the ChinaJoy expo that video games needed to be "good, clean and secure". Shares of companies like Tencent, NetEase and XD started tumbling in response. The shares of China Mobile Games and Entertainment Group (CMGE) even fell by a whopping 20%.
>> ***Imagine the popular Top Gear "Oh, no... Anyway" meme here.

Rainbow Six Extraction's monsters infect Siege with a month-long event
https://www.pcgamer.com/uk/rainbow-six-extractions-monsters-infect-siege-with-a-month-long-event/
Tom Clancy's Rainbow Six: Extraction may have been punted back into 2022. But if you're hankering to have Team Rainbow blast some aliens, Rainbow Six Siege will let you fight a team of infected operators until August 24 with this month's Containment event.

Blizzard's president is out, studio to be co-led by a woman for first time in its history
https://www.pcgamer.com/uk/blizzards-president-is-out-studio-to-be-co-led-by-a-woman-for-first-time-in-its-history/
On July 20th, California's Department of Fair Employment and Housing filed a lawsuit against Activision Blizzard collecting "numerous complaints about unlawful harassment, discrimination, and retaliation" at the company. (...)
Activision Blizzard CEO Bobby Kotick promised a rapid response. Today Blizzard has announced that J. Allen Brack is leaving his position as the president of the studio, to be replaced by Jen Oneal and Mike Ybarra as co-heads of the studio.

I've checked the specs and it's a fine monitor. You'll be hard pressed to find something better at that price point.

Hopefully this means some changes will be happening at Blizzard. The company went down so hard over the years