Apex Legends introduces hotshot Titan pilot Valkyrie
https://www.pcgamer.com/apex-legends-introduces-hotshot-titan-pilot-valkyrie/
Apex Legends' next season is calling back to Respawn's Titanfall roots, starting with the daughter of one of the second game's mercenary villains.
Today's new Stories From The Outlands trailer brings series mascot Kuben Blisk back into the spotlight, and introduces us to Kairi "Valkyrie" Imahara. Titanfall 2 players will probably recognise her old man as Viper, the boss of that game's brilliant airship level, and the short (titled "Northstar" after his Titan class) shows us 'Kyrie taking a joyride in her dad's mech.

Valheim patch overhauls terrain, buffs hoe
https://www.pcgamer.com/valheim-patch-overhauls-terrain-buffs-hoe/
For all you Vikings toiling away at massive terrain modification projects in Valheim, and suffering fps woes as a result, there's a new patch that may bring relief in more ways than one. Valheim's 0.150.3 patch, released today, introduces a new terrain modification system that is intended to cut down on performance issues.

Whoops: Steam accidentally pulled Rockstar's games from sale earlier today
https://www.pcgamer.com/whoops-steam-accidentally-pulled-rockstars-games-from-sale-earlier-today/
There was a brief burst of excitement and confusion earlier today after a large number of Rockstar games, including Grand Theft Auto 5, Red Dead Redemption 2, LA Noire, Max Payne 3, and Bully, were "retired" from Steam, meaning that they were no longer available for purchase on the storefront. Fortunately, it turned out to be a mistake, and everything came back—including, for a very short period of time, one game that wasn't supposed to.

Steam goof let a few lucky people buy Midnight Club 2 for the first time in 3 years
https://www.pcgamer.com/steam-goof-let-a-few-lucky-people-buy-midnight-club-2-for-the-first-time-in-3-years/
(...)
Midnight Club 2 is actually there, but searching through Steam won't bring it up—you have to Google it to find a link. (Or, for the sake of convenience, you could just click here.) That's because it was delisted in early 2018 because licenses for songs in the game were about to expire, according to the Midnight Club Wiki.
Earlier today, though, it made a surprise comeback. Somebody pushed the wrong button (metaphorically, or so I assume, anyway) and all of Rockstar's games were suddenly removed from sale on Steam. Naturally, there was a great rush to get them all back—such a rush that Midnight Club 2 ended up being restored for sale as well.

Call of Duty: Warzone's Season 3 update is a merciful 25.2GB
https://www.pcgamer.com/call-of-duty-warzones-season-3-update-is-a-merciful-252gb/
It's new season week in the world of Call of Duty, and that means a barrage of updates from Activision about what's next for Black Ops – Cold War and Call of Duty: Warzone. We'll learn more about Warzone's changes later this week, but for now, we at least know how much disk space Season 3 will take up, as outlined in a new Cold War Season 3 blog post. Activision also confirmed that Season 3 will launch on April 22 across both games.

Call of Duty: Warzone's overpowered Sykov pistols just got nerfed into the ground
https://www.pcgamer.com/cod-warzone-sykov-nerf/
Raven Software is wasting no time reacting to Call of Duty: Warzone's overpowered new pistol, the Sykov. Just a few days after its surprise release, a new patch has gone live that nerfs the pistol's accuracy, movement speed, and damage under certain conditions.

Double Fine says Psychonauts 2 is ‘playable’ and coming this year for sure
https://www.pcgamer.com/double-fine-says-psychonauts-2-is-playable-and-coming-this-year-for-sure/
The original Psychonauts, Double Fine's narrative platformer about a summer camp for weirdos with psychic abilities, came out in 2005, and it took a full ten years for a sequel to be announced—and then slightly longer for it to actually be confirmed. Six years after that, we still don't have our hands on the game, but Double Fine said on Twitter today that this year, beyond any doubt, is the year that Psychonauts 2 will finally arrive.

Celeste and Towerfall studio announces new action game set in ‘seamless pixel art world’
https://www.pcgamer.com/celeste-and-towerfall-studio-announces-new-action-game-set-in-seamless-pixel-art-world/
Earthblade is an exploration action game set in a ‘seamless pixel art world’, and it’s in development by Extremely OK Games, the studio responsible for Celeste and Towerfall. Based on the teaser below it seems to be set in a lush fantasy world, but that’s about all we can say at this stage, because this is a “vibe reveal,” according to the devs.

Nier livestream confirms 'extra content' for Nier Replicant and a new Yoko Taro game
https://www.pcgamer.com/nier-livestream-confirms-extra-content-for-nier-replicant-and-a-new-yoko-taro-game/
(...) overnight it was confirmed that if you want to play the older and burlier Nier in the forthcoming Replicant remake, you can. The news comes via a lengthy marketing livestream conducted in Japanese, which also confirmed a host of other "extra content" coming to the game at launch.

World Of Warcraft has begun censoring slurs in-game
https://www.pcgamer.com/world-of-warcraft-has-begun-censoring-slurs-in-game/
World Of Warcraft will now block messages containing "reserved words", arriving as part of a small moderation update discovered by Wowhead.
For years, WoW has censored certain words by obfuscation as part of a mature language filter. But now, it appears the game will block messages from being sent entirely if they contain so-called "reserved words". For now, this covers one racial slur, though I expect to see that category expanded in future.

Rockstar quietly makes all Max Payne 3 and LA Noire DLC free
https://www.pcgamer.com/rockstar-quietly-makes-all-max-payne-3-and-la-noire-dlc-free/
All pieces of DLC for Max Payne 3 and LA Noire are now free on Steam, as part of a small update pushed by Rockstar last night.
Last night was a weird one for Rockstar. The studio's entire catalogue was briefly pulled from Steam, reappearing 30 minutes later. On their return, Midnight Club 2 (which was removed from sale in 2018) was re-listed, though Rockstar would take it back down an hour later.

I know I know, people are getting sick of hearing the price increases when it comes to PC but... You could say that it prepares you to either buy the main components you want now or commit to waiting until 2022 for building a pc.

Shin Megami Tensei: Nocturne is capped at 30fps on PC

I've touched a bit of Shin Megami Tensei: Nocturne's upcoming PC port on Steam. Sad to report that it is indeed capped at 30fps. I've taken a small slice of gameplay footage at the very beginning of the game with a Steam FPS counter at the top left (sorry that it's super small). pic.twitter.com/FRGrMJoF89

Pretty weird how in a number of titles, the external SSDs loads games faster than the Internal SSD on the PS5... I am assuming that the BC mode isn't using PS5's SSD to it's full potential but regardless, Internal should generally be faster than external, especially since even the external Sata SSD is faster at times. Very interesting and Weird!

Max Payne 3 and LA Noire DLC's now free. Time to boot up the best TPS ever (MP3) for another playthrough.

The only thing stopping me from buying it now is that, to be honest, I don't even know if I'll be able to get a new CP this year or if, because of the shortages, mining and other bullsh*t, I'll end getting one later on when DDR5 will be a better investment (or maybe the only option).

But I'm seriously considering getting (part of) the storage now in case that new crypto takes off and becomes a problem later.

frankly it soulds like that games developed for the ps5 will be best experienced on an external SSD, enforcing the SSD-cartel conspiracy

Yeah this would have been bad on so many levels. Now we can continue using it without MS fucking it up.

Basically what it does is that before, in order for gamers to have new Direct X 12 Ultimate features, they would need to upgrade their version of Windows 10 to the latest version. Due a number of reasons, not everyone does that. So for a developer to build their games around the latest and greatest features, they typically wait until enough users upgraded to the latest versions of Windows. Direct X 12 Agility makes it possible so that the new Direct X 12 Ultimate features will work even on older versions of Windows going back to Windows 10 November 2019 Update.

Direct Storage for PC will support PCIe 3.0 NVMe drives, too. All DirectX 12 compatible HW will support the feature. Confirmed by Microsoft. This means RDNA 1, Pascal and every other GPU that supports Direct X 12 will also support Direct Storage. However the performance will vary and the GPUs that have full Direct X 12 Ultimate support will have the best experience by being able to combine Sampler Feedback with Direct Storage. Limited Developer Preview this summer. 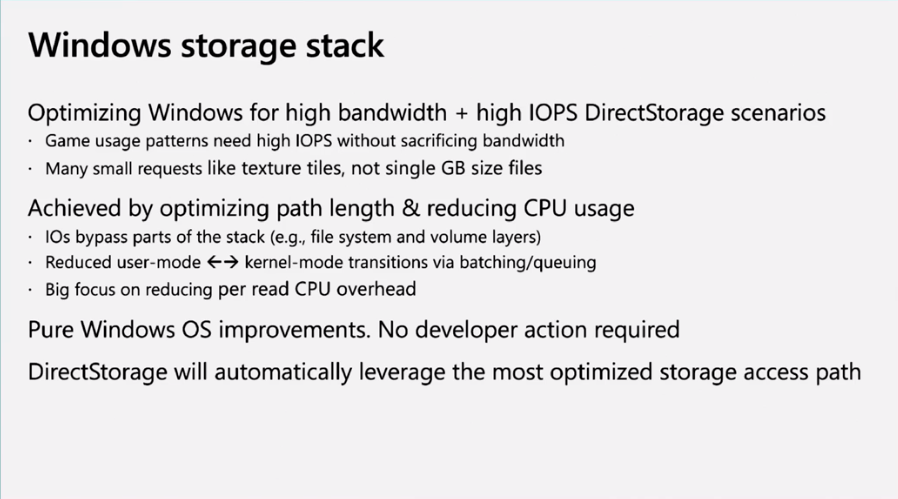 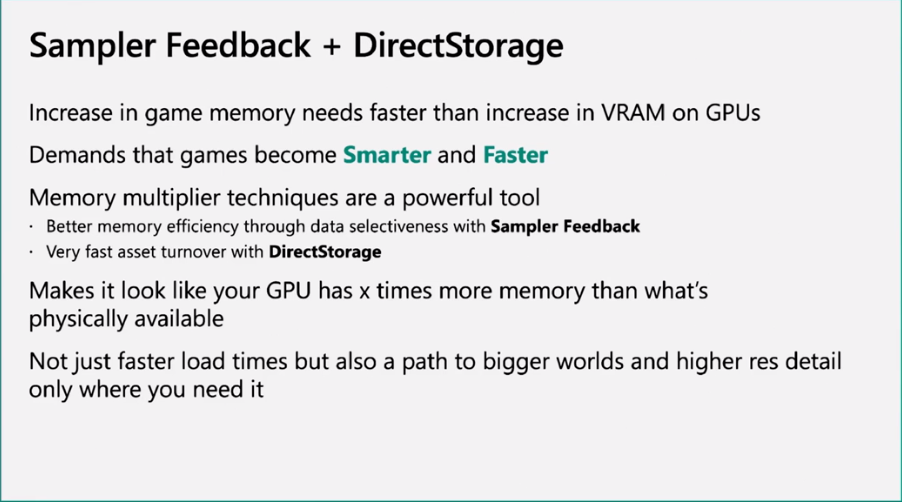 More slides at the link

You know, if the hardcore weebs weren't so up their own arse about buying this shitty ports out of pure fear that publishers will stop releasing on PC, and actually standing against this kind of shit, we wouldn't be seeing crap like this happening often with Japanese PC ports.

Like I love my animu, my doujin shit and some JRPG's, but I don't like seeing Japan just taking PC for some two bit whore, that'll accept less than what the console got decades ago, at a higher price and not even any support for sodding K+M. Like c'mon Atlus, it's fucking 2021, not 2001. There's no real excuse for 30fps cap on PC at this stage, and no excuse for the higher price, when there's cut content and no support for PC's main peripherals.

What's sad is that I can see this game still selling decently, because I've seen all sorts of bad Japanese PC ports over the years, to know that the weebs on Steam will just eat up anything that falls into their laps, regardless of poor quality/pricing.

I just wish they'd grow a bit of a spine. Some on the Steam forums are complaining about all of this, but there are still the usual diehard fans that are coming into those threads to defend Atlus or basically call people poor/broke (great attitude to have in the current world's economic situation /s) . They are possibly one of the few groups on PC that I cannot stand, simply because they allow bad shit to pass by and become the norm for PC. Like I really fucking want a list of SE games, but a majority of them are bugged, broken, or stuttery as shit, and none of that flies in my books, and it sucks, because a Jap publisher like Square is so fucking stubborn/arrogant to not fix their shit, and Atlus is looking that way to me already with this crap.