GOG has a new sale and three new releases:

Steam has a new daily deal and the Midweek Madness deals:

And Fanatical has a new Star Deal: Chris Sawyer's Locomotion, 83% off for the next 48 hours: https://www.fanatical.com/en/game/chris-sawyers-locomotion

Call of DOOM: Black Warfare Mod releases later this month, gets a launch trailer
https://www.dsogaming.com/news/call-of-doom-black-warfare-mod-releases-later-this-month-gets-a-launch-trailer/
Modder ‘Arrowood’ announced that his Call of DOOM: Black Warfare Mod will release later this month. In order to celebrate this announcement, the modder also released a launch trailer for this mod that you can find below.

The creators of The Division are working on a new Star Wars game
https://www.dsogaming.com/news/the-creators-of-the-division-are-working-on-a-new-star-wars-game/
Ubisoft and Massive Entertainment have announced that they are working on a brand new official Star Wars game. The teams will collaborate with Lucasfilm Games for an open-world game set in the Star Wars universe.
>> Well, there goes the EA exclusivity.

The Capcom hack may have affected just under 400,000 peoples' data
https://www.pcgamer.com/capcoms-data-breach-may-have-hit-up-to-390000-people/
Thousands more people may have been affected by last November's ransomware attack on Capcom than first thought, the studio announced today.
(...)
But besides sales data and other financial data, last year's breach also compromised the personal information of 9 current and former Capcom employees. In a new press release (via GamesIndustry.Biz), however, the studio has since verified an additional 16,406 compromised individuals—reckoning the maximum number of potentially affected people could be as high as 390,000.

Play Call Of Duty: Cold War's zombies mode for free all week
https://www.pcgamer.com/play-call-of-duty-cold-wars-zombies-mode-for-free-all-week/
Call Of Duty: Black Ops - Cold War will let you mow down hordes of ramblin' shamblin' undead fascists for a free week, starting this Thursday.
Beginning January 14, you'll be able to download a standalone version of Cold War's Zombies from the Battle.net launcher as part of the game's Zombies Free Access Week. The free trial lets you stick it out on Die Maschine, Cold War's debut zombies map, across two different modes.

The Sims 4 is getting a Paranormal Pack just in time for 3 months after Halloween
https://www.pcgamer.com/the-sims-4-is-getting-a-paranormal-pack-just-in-time-for-3-months-after-halloween/
Want some more Phasmophobia in your Sims' lives? The Sims 4 Paranormal Stuff Pack arrives this month, and with it you can build haunted houses, commune with the dead by performing seances, and start a new career as a paranormal investigator. I think that career has some promise, considering the trailer above is stuffed with more ghosts than that scene from Ghostbusters when the jerk from the EPA shuts off the containment unit.

Mundaun, a hand-pencilled tale of horror in the Swiss Alps, is coming in March
https://www.pcgamer.com/mundaun-a-hand-pencilled-tale-of-horror-in-the-swiss-alps-is-coming-in-march/
The first three months of 2021 might be a quiet stretch, but there are some interesting things happening. One of them will hopefully be Mundaun, a "hand-pencilled horror tale" announced last summer that one-man studio Hidden Fields announced today will be out on March 16.

The ESA pauses political contributions following US Capitol attack
https://www.pcgamer.com/the-esa-pauses-political-contributions-following-us-capitol-attack/
The Entertainment Software Association has announced that it will pause contributions made by its Political Advisory Committee after an attempted coup in the US Capitol by far-right insurrectionists.

Tim Schafer has wrapped up work on Psychonauts 2's script
https://www.pcgamer.com/tim-schafer-has-wrapped-up-work-on-psychonauts-2s-script/
Say what you will about Double Fine's back-catalogue, but you can almost always expect plenty of witty rapport from the studio's characters. This week, Psychonauts 2 closed the book on its own script, as Tim Schafer announced that he'd penned his last line of dialogue for the brain-invading sequel.

Overwatch has a new Tokyo-inspired map and Hanzo challenge
https://www.pcgamer.com/overwatch-gets-a-new-tokyo-inspired-map-and-hanzo-challenge/
Blizzard released a new free-for-all map for Overwatch on Tuesday, Kanezaka, which comes with its own challenge and cosmetic rewards. The Kanezaka challenge runs from January 12 - 25, with an icon, spray, and the Hanzo skin being rewarded for winning three, six, and nine games respectively. The games can be won across various Overwatch modes—Quick Play, Competitive Play, and Arcade.

Dead Cells' Fatal Falls DLC has a homicidal pet sword that flies, and a new trailer
https://www.pcgamer.com/dead-cells-fatal-falls-dlc-has-a-homicidal-pet-sword-that-flies-and-a-new-trailer/
Dead Cells' upcoming DLC, Fatal Falls, has a trailer showing off the two new biomes it'll add to the excellent roguelike, as well as the weapons and enemies therein. Due for release on January 26, developer MotionTwin notes that this marks the 22nd major update to the game since its early access release in 2017, and is only the second expansion to have an asking price ($4.99/£4.99). Most importantly, it will let you Praise the Sun.

According to TrendForce, that effort will scale upwards with TSMC manufacturing certain allotments of Intel's midrange and high-end CPUs using the semiconductor manufacturer's 3 nm technology in 2022. "

A 3nm Intel. Next year is going to be a slaughter house lol. At least for gaming performance.

I very much doubt that Intel will go 3nm in 2022 for CPUs, more likely this is for other chips, like their Optane memory. TSMC already said before that they are not considering Intel as a stable client and thus only get a small wafer allotment at the back of the line. In fact, that all sounds more like an intel investor's wet dream than anything realistic.

Really, the only CPUs I could eventually see TSMC produce for Intel are the Atom line of chips (or chiplets in case of Alder Lake successor), so the successors of Tremont.

Last edited by Bofferbrauer2 - 5 days ago

Yea we will have to see what happens. Intel's CEO is stepping down and being replaced and their current fabs are clearly not working out for them with delays after delays. So I wouldn't be surprised if they go with TSMC and go Fab less like AMD did a long time ago. I wouldn't take TSMCs statements from last year to stay true forever as a lot of things can change in the tech industry very quickly and Intel certainly has enough money to get allocation from TSMC if they need to.

The one thing is for sure is that Intel can't continue in their current trend forever. Either they need to get their act together with their own fabs or go with a fab that actually does have their act together. Cause it's one thing to get killed in Desktop, but when AMD now has Laptop and Server, they gotta do something drastic.

Here is to hoping that the 3060 performs in line with my expectations and has available stock once it launches...

At this point Intel might as well abandon 10nm and 7nm go straight to 5nm. 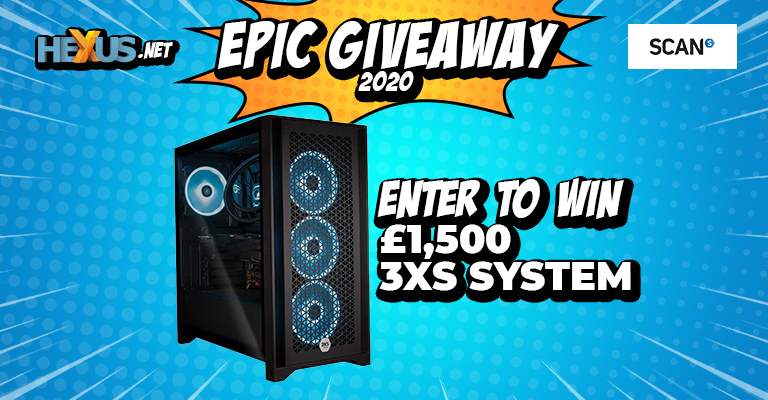 The winner will get: "an AMD Ryzen-powered Scan 3XS base unit worth £1,500! Outfitted with a Ryzen 5000 Series CPU, the system will come equipped with 16GB of DDR4 memory, a 1TB NVMe SSD and a dedicated graphics card!" The description is as vague as it could be.

This contest is limited to UK ONLY.

Also, this is the last of the Epic Giveaway contests.