As far as I know the 64-core doesn't go past 285W under full load, so even that one consumes less than Intel's 10-core chip.

Is Zen really that great or is the competition just that terrible?

Probably the latter. To AMD's credit, they aren't so behind Nvidia compared to how behind they were against Intel with FX. It's just their high end is where they can't seem to break through. So I wouldn't count them out fully but if I was a betting man, I'd go with Nvidia being dominant again.

I'm sure other sites have something similar but here's a Guru3D graph showcasing the single core IPC performance in Cinebench of a series of CPUs, all clocked at 3500MHz for the sake of comparison: 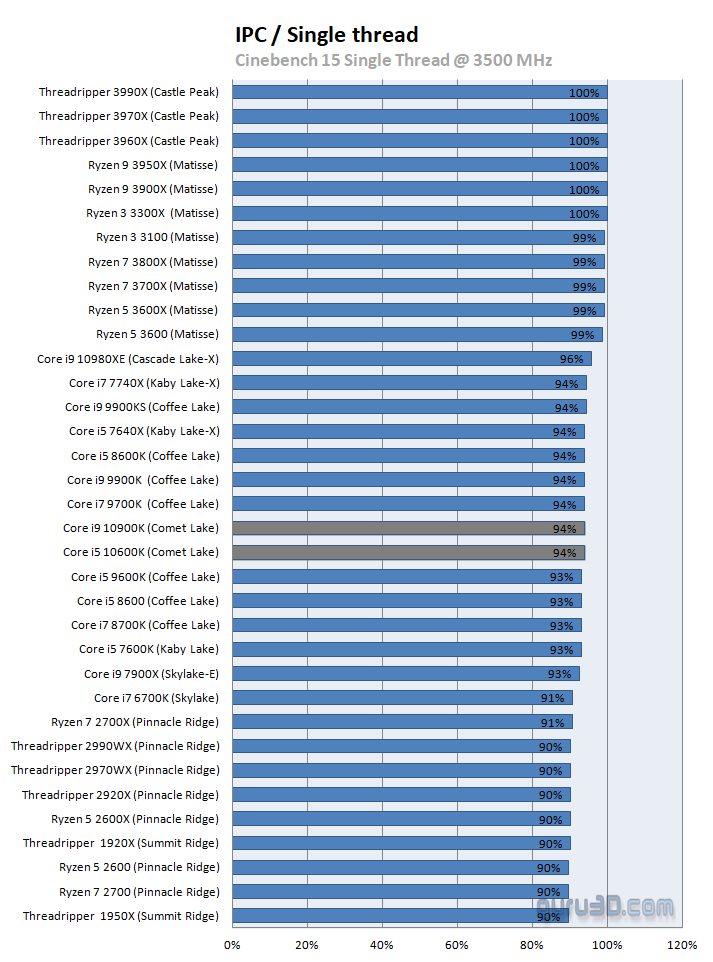 You can see how there's a clear improvement between Zen/Zen+ and Zen 2, but the newest Intel processors aren't much faster than Skylake, relying only on higher clocks to get better results.

Seems that Nvidia took a page out of AMD's book and made their own version of Smartshift for laptops.

Here's one of the first 8TB SSDs. The only problem is that it's has QLC...

Also the hotchips conference might have some interesting keynotes.

I don't see the issue with QLC. I'm just waiting for huge SSDs for fast long term storage, that are actually affordable. They're gonna have minimal writing on them so they'll last forever anyway. I'd also take QuintLC and SextLC if that makes them cheaper.

At 8TB it should have good endurance in terms of total writes... And decent performance if they used a ton of NAND chips.

I am not against QLC or TLC, but I am against them if they don't bring tangible benefits in terms of capacity/price/performance.

The HotChips conference is always very interesting. Might get release dates for XSX that day, a preview on Tiger Lake and XE Graphics card (probably not a release yet for Tiger Lake, the specs of leaked TL chips were rather underwhelming so far to say the least). POWER 10 will be interesting to see if IBM can catch up again on Intel and eat up server market share from Intel. But I'm most curious what Jim Keller has to say out of that bunch.

Ice Lake SP is also having a keynote, so I guess release will start around that date. The ThunderX3 are interesting at the other end of the spectrum, being based on the ARM architecture. Could become very dangerous for the small company server business of both Intel and AMD if this one would take off.

Most interesting will be what I call the lunchtime duel: At 12:00 AMD will present their Ryzen 4000 Desktop APUs while at 12:30 Intel comes with Tiger Lake And at 17:30 NVidia will unveil Ampere, possibly launching that day, too. Little bummer: This probably only covers the professional Quadro versions of Ampere, not the consumer parts.