Hopefully some folks got it during the sale window. I was tempted to get a 2nd copy, just because it was such a steal :)

I’d be more excited about a modernized version of Zelda 2: The Adventure of Link than Twilight Princess or Wind Waker, neither of which I’m personally interested in playing at all as I wasn’t a fan of those games when they first came out. Although, Twilight Princess and Wind Waker probably have a broader appeal than a Zelda 2 remake.

Personally not interested much in TP, I played maybe a quarter of the way through that game on the Wii and just found the whole wolf mechanic tedious and boring. That was the game when I was like okay Zelda needs a big change...and 10 years later they did it with BotW!

Wind Waker though, I only ever played the start of that game but it seemed great. I'll definitely pick up a WW/TP pack for Switch in order to play WW. WW has been probably my most desired port the past few years.

All evergreens including zelda are declining year on year by quite a bit, I'm expecting around 3.25m for BOTW this FY.

There are some cool new NES Zelda icons available now for NSO. Check them out! 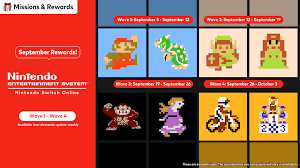 The next Nintendo directs starts in about 90 minutes, at 10am EST on September 13. We've seen rumors of Twilight Princess/Wind Waker HD ports, and speculation about Breath of the Wild sequel news.

I could definitely get behind a remake of Zelda II. The original game is outstanding in many ways, but starts to fall apart in the end. If Nintendo could retain the spirit and mechanics of the original, but make it more forgiving, I think it could be great.

I like the naming scheme.
Breath of the Wild

Tears of the Kingdom

I assume the kingdom got restored/rebuilt in the timeframe between both games.

I might be the only one, but I think it would be really cool to get a spin-off city building game that takes place after the events of BotW. You could play as Zelda as she rebuilds Hyrule. Maybe I'm crazy