Vesper Lynd is one of my all-time favorite Bond fims. Beautiful, intelligent, and a really deep character. But yeah, the card hand was ridiculous. The probability of each player getting such rare hands would have to be one in several billion at best.

i agree,she was absolutely stunning,i do have a litle crush on her,

i mentioned earlier about that line where she asks if women are disposable pleasures or meaningful pursuits,infact that whole scene on the train where they dissect each others character is pretty delicious stuff

I don't think that the players would be as cautious as that, they all had extremely strong hands, and the two guys that were left only had err...a "small" amount of money left. The first guy should have tested the water, the second guy still had a very good hand though. Their reckless betting was a bit unrealistic, but they weren't really the main focus of that scene, they had to go all in otherwise they would have folded when Le Chiffre and Bond started betting like mad men.

The showdown between Bond and Le Chiffre, I thought was perfect. Bond had been reckless before when he had to buy himself back in, Le Chiffre either thought he was bluffing or was confident he had the better hand. Bond could only win with a full house by having the last Ace and 8 in the pack or with a straight flush, both of which Le Chiffre knew were very unlikely (you can see it when he checks his cards and laughs).

The new Casino Royale movie would be a very good review.

For some reason my mind adopts a scottish accent when i read your posts... Anyway, great review. I've only seen the film once and it was a couple of years ago, so im not too familiar with it, but i remember not being too engaged by it, (probably because its so old) so i agree with your score. I'm more familiar with Dr No, so im looking forward to that one! 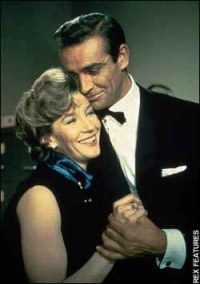 It might have been flawed but at least it wasn't all under water!


Flattery will get you nowhere - but don't stop trying.