Forums - Microsoft Discussion - Microsoft Unapologetic About Going After Casual Audience, Aiming To Be #1 WW This YR

LOL...Microsoft needs to stop acting like they started a trend. They are bottom feeding off of the casuals Nintendo brought to expand the market.

we did have the production cost back when they were selling at losse a couple years back... I'm sure we can find that.... but I don't have the time.... now it's pretty easy to calculate the HW price based on component prices.... and with a little basic in business management and economics you can speculate on their production cost....

that said I have no numbers in hand myself..... but it is quite easy to guestimate something believable from information available online if you care to dig arround....

now I read your stat... makes sens though we've seen pretty crazy push in pre holliday season till end of year.... depends on what's cooking up at each other marketing dept and what kind of communication campain they have in store.... it's gonna be really tough.... but not impossible.... not like the one about PS3 being in front of XB within 3 years people were throwing around back in 07... that was pretty crazy to even imagine.....

Well it's already almost July and their in last place. Gears can't have that big of an effect.

The thing is that Microsoft is probably counting the timeframe of their fiscal year which starts on July 1st, so what happened in 2011 so far won't matter for their goal. What makes me believe that this is correct is that Microsoft at the same time said that they had become the #1 in the USA, but in 2010 the Wii was still ahead of the 360. However, if we look at the numbers for Microsoft's fiscal year which is July 1st 2010 to June 30th 2011, then their statement is true. 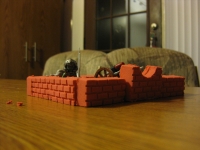 I wouldn't expect gears to give them the win, rather kinect casual holoday surge plus 100 dollar kinect bundle price drop

@Baalzamon - What endimion said. I actually made a very detailed thread on the production costs of Kinect and the 360 a while back, but don't have time to search for it right now.  Also, it seems you read way too far into my post. You are assuming that I implied things that I did not, such as the assumption that I think MS will cut the price by $100. I'm not ruling out any possibilities, but what I can say is that MS most definitely can cut $100 off if they wanted and still be profitable on hardware, while Sony could not do the same.

And please refer back to 2008, where the 360 was down by over 1 million, and after their price cut soared to pass the PS3 by 1 million. That's a 2 million swing starting from September onward, and with MS predicting to be the #1 console WW this year, that is even more evidence to support they will be making some pretty big moves to boost sales this year.

This is commonly miss udnerstood. Move was a big succsess for sony (it has sold a few million units). However it hasnt been anywhere near as succsesfull as kinect. But it would silly to call it a failure :)

With news that Ubisoft, the king of cashing in, won't support Move, it should be clear how successful Sony's motion controller really was. It's not even worth it to make a cheap port of a Wii game.