I'll be keeping my eye on this one. I've only heard great things about the previous 360 title, and when it's compared to Pikmin (only evil-er

) it definitely can't be a bad thing. 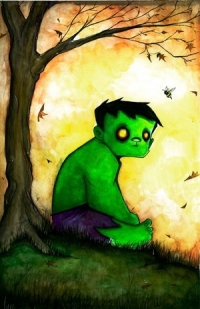 Essentially it is very much like Pikmin except you're the bad guy and you live in a world based on folklore and fairytales. A lot of jokes, most of which relate to fantasy cliches. Dwarven Breweries, Halflings etc. If you're into a fantasy setting, have decent or good knowledge of all the typical things in those settings and have a morbid or twisted sense of humor I think it's very much a game you'll enjoy.

Now that I think about it...could this be the game Bozon was hinting at in the "?" video yesterday?

I mean the armor they were wearing fits this game.

You're avatar is stupid. You need a new one

I wasn't trying to argue with you. I was just pointing out both demos were good. The last statement was kind of more disappointment then trying to tell you what you were saying. My b.

A million shipped is not the same as a million sold.

Soul Calibur IV supposedly shipped well over a million between both platforms, but it sold way under million. Don't get me wrong, I believe it's going to sell well, I just am pointing out that there can be a major difference between shipped and sold.

Also, splitting it between the 3 consoles and having a lifespan of over a year also doesn't constitute that it's still a big seller.

I actually feel bad for Codemasters because they have released some pretty solid games and for some reason very few of them get noticed.

Do not know if want.