Forums - Gaming Discussion - Cyberpunk 2077 is having quite a comeback

CP2077's launch is arguably the worst launch in gaming history, at least to me. But, after over a year and a half of updates (lawlz) it's finally in such a good state that millions are flocking back to the game. The anime also plays a big part in this. I remember people finding last-gen versions of the game for $5 in the bargain bin!

This game could've been among the best selling games of all time, but CD Projekt really took a double barrel shotgun blast to the foot.

Now with the games only expansion, Phantom Liberty, releasing next year (and dropping last-gen support for this expansion) makes me wonder just how big this game will get now.

I'm personally delving back into it and although it falls short on quite a few promises, it still is a kick ass game! I'm thoroughly enjoying my time with it.

Will you be giving Cyberpunk 2077 another chance or is the game past redemption for you? If you decide to not give the game another chance, I do highly recommend the anime on Netflix!

Each day of this week Night City has been visited by 1 million players, both new and returning.
We wanted to use this opportunity to thank you for being with us and playing the game. Thanks, Chooms! 💛 pic.twitter.com/zqggblztF8

Yea having played it on PC, it's an amazing experience. There were bugs which a lot of them have been fixed and the NPC Ai is still largely lifeless compared to the likes of GTA but the single player story is really good imo. I think if you have a PS5/Series X or mid-high end PC, it is certainly worth playing. Especially as you can get very deep discounts these days.

I'll personally be playing it again once I get the 4090.

Hope they paid Studio Trigger good. Animations don't earn as much, these opportunities would be great for both industry.

You'll have to update us on what that experience will be like!

Despite the stumbled launch, the game actually sold really well and a lot of people liked it, including myself. The new show on Netflx (which is brilliant) also helps the bring the franchise to the masses.

I love the world CDPR made here and I can't wait to see more. 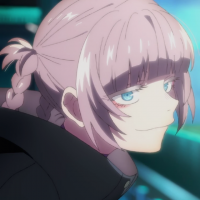 Played it since day one (currently sitting at 364hrs making it only second to TES3 from generation 6) and loved (and quite openly said so) every single minute of it.

Last edited by VersusEvil - 3 days ago

It did have a good comeback but could have been so much more, bought it in march and the bugs got fixed, i had no major bugs. This game had a lot of problems, dumb as a rock AI, and the city is the most impressive in looks and design that i ever played but the most shitty in all open world games i played too because of the bad police system, terrible npc behaviour etc, rockstar could teach these guys on how to make one that is not only looks and design but one that feels right.

This ip has so much potential , i had a lot of fun playing it but ... I am glad the IP is not dead and i hope they learned the lesson for the future and i fucking hope they make a second season of the anime.

The anime of the year so far , i love studio trigger and i always knew they would nail this. Masterpiece in story and characters. I loved every character in this, everyone is special and diferent. Becca is best girl.

Will check out the anime.

Zero interest in the game.

When I take the plunge on a PS5, I will probably pick it up. I wanted to get CP2077 on PS4, but the awful reviews deterred me.

Last edited by SanAndreasX - 3 days ago

While I'm glad the C2077 project is finally going in strides with good updates, content and external projects. It still feels simply apologetic of the bad symptoms this industry as shown in the last few years. Demonstrating false hopes to get a buzz so that whatever happens with the product first hands won't matter because you're sure to get the interaction and sales you want is incredibly scummy.
CDPR bad management, multiple turn over with the staffs and ultimately the fact their due is with their investors and seeing as they're more than willing to throw this "passion" under a bus just for a quick buck in the end should be a cautionary tale for whatever they come up next.