So IGN compiled a comparison between the Big 3's online services for comparisons sake. 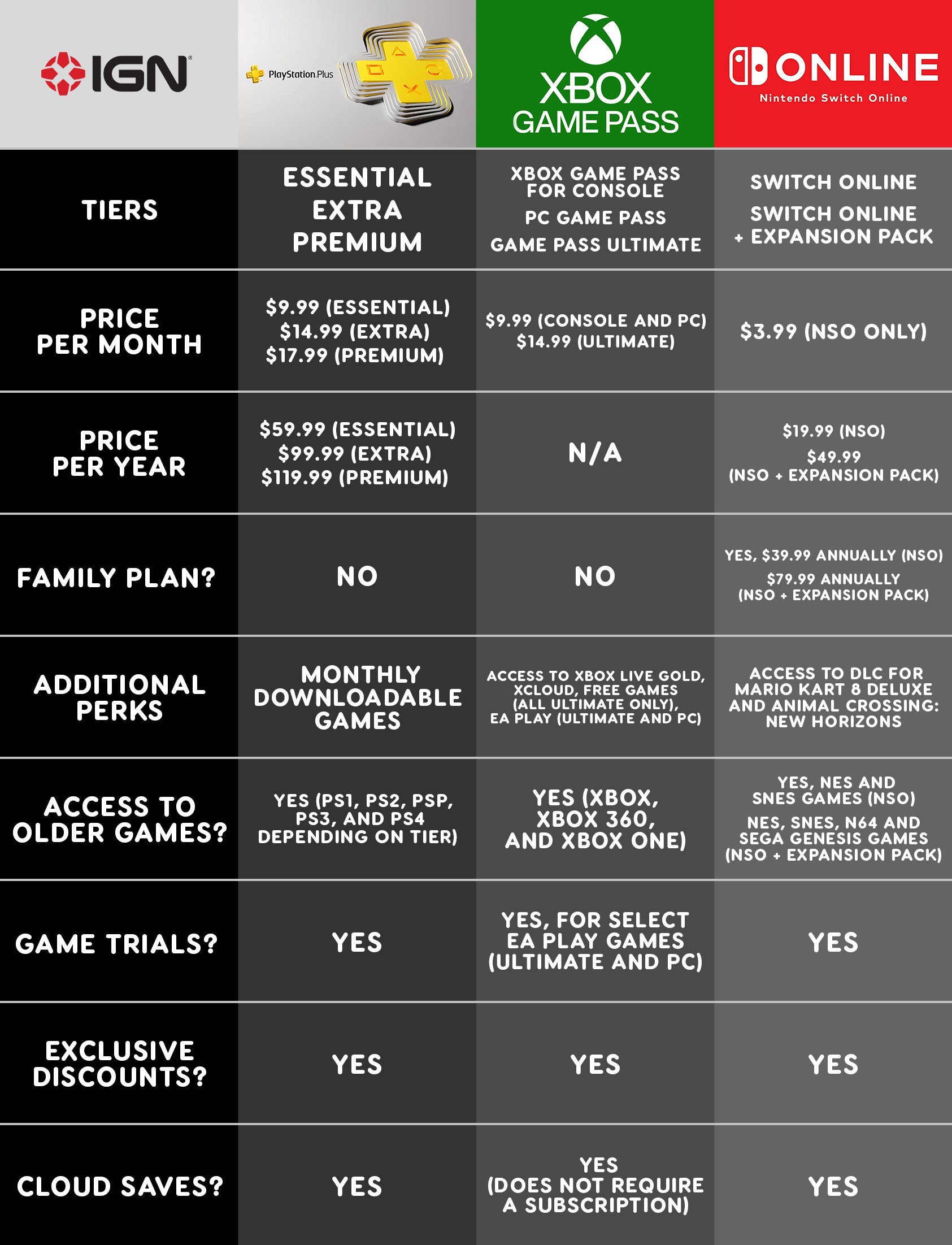 Which service do you think is the best bang for its buck? Are you planning to subscribe to PSN Extra or Premium? Do you already have Gamepass or Nintendo Switch Online + Expansion?

I personally have PSN+ and I'm waiting to see a game list to make the determination on if I'll pay for anything more. I already have Game Pass and Nintendo Switch Online + Expansion

From the chart, I think Nintendo's is better. However, there is a lot of stuff that isn't on the chart that is lacking on Nintendo's service. For example, the quality of online gameplay is VERY variable. Splatoon 2? Great, works fantastic. Smash Ultimate? Awful headache, don't even want to try anymore. In addition, adding friends for online play is just more cumbersome on Nintendo hardware. That said, I do like that their online plan is so cheap in comparison to the other two, and I love how they allowed for family plans (8 people can all have NSO + Expansion pass for a year for less money per person than one month of PS+ or Gamepass).

IF Nintendo's online was better I'd give it to them. As it stands, I think I'm a bigger fan of Playstations tier system for the sole reason of it being cheaper while including online play. That said, not really a big fan of these subscription services. It's a shame that Nintendo isn't offering individual purchases and I'd imagine Sony will be following suit.

I've never used Game Pass, but I have to give it to them. There are $60 games on there from Day One. And if you care about those games, it's easily the best value. Even ignoring that, there's quite a bit offered.

It should be mentioned that the backwards compatible games with Xbox are there by default. You don't need a subscription to play those old games. Just pop in the disc.

I just got my PS5 and I did not know PS Plus was required for cloud saves lol. That sucks but oh well.

But each subscription service does have their own unique benefits that make them inviting. I'm still debating if I want any of them. I'd like NSO for the N64 games and included DLC but I'm still holding off on that.

The best value? If you do it the smartest way possible, then the NSO + Family plan, no doubt about it. 8 different accounts get access to hundreds of classic titles, Mario Kart 8d booster pass, and ACNH expansion (plus other bonuses currently and in the future) all for just $6.25 a year.

I love Gamepass PC the most, but there is no doubt if done the smart way NSO + is the best value in subscription.

Easy W to gamepass, especially in comparison with the month by month prices. I had no idea preimum PsPlus was $3 more expensive.

Strange of IGN to omit the yearly amount though.... Would likely look less favourabe to gamepass and IGN seem to have a larger Sony following so I doubt they're tyring to pander to the Xbox minority. They should add it.

I guess it depends on the person. Played Halo, Forza last year which cost in excess of $80 new here in Australia. Tunic will probably cost $30 and GotG another $30-50.

I would have certainly bought the first 2 and never tried the latter had it not been for Gamepass. The service "pays for itself" for my usage.

The cheaper online and bundled games and DLC with Nintendo though is certainly the best bang for buck for people with multiple gaming devices or who primarily play on the Switch for sure.

I should have made a bigger disclaimer that this was from IGN. They tend to do more barebones assessments but at least they didn’t seem to skew the data too badly

For sure Gamepass is awesome! I've saved thousands of dollars so far playing games there. But most people play only a few games a year, so if older games is your jam and you don't play much, the NSO + Family plan is the best value. For me, personally, the best value is Gamepass PC far and away.

Value is subjective. This year GamePass has already saved me over $200 on games I wanted to buy and now don't have to. It also gave me a few games I didn't know I would like and ended up liking. Or in the case of a game like Tainted Grail, ended up loving. To me the answer is obvious. But again, it's subjective.