Number of games in Top 30

Xbox Series just keeps on trucking, that's two 5k+ weeks in a row, and a new 3rd largest week for Xbox Series in Japan, after launch week at #1 and last week at #2. If Xbox can keep up these 5k+ shipments per week, they will easily pass Xbox One lifetime before the end of 2021, they can even drop to 3k per week and still pass Xbox One before the end of the year by a good margin.

Nice XBS sales.
Pretty average for everything else.

Xbox holds steady at it's higher end of the sales spectrum.

How long did the XBO take to reach 83k?

Edit: Ok now I'm disappointed in No More Heroes III's performance. It's the lowest debut in the series in Japan. 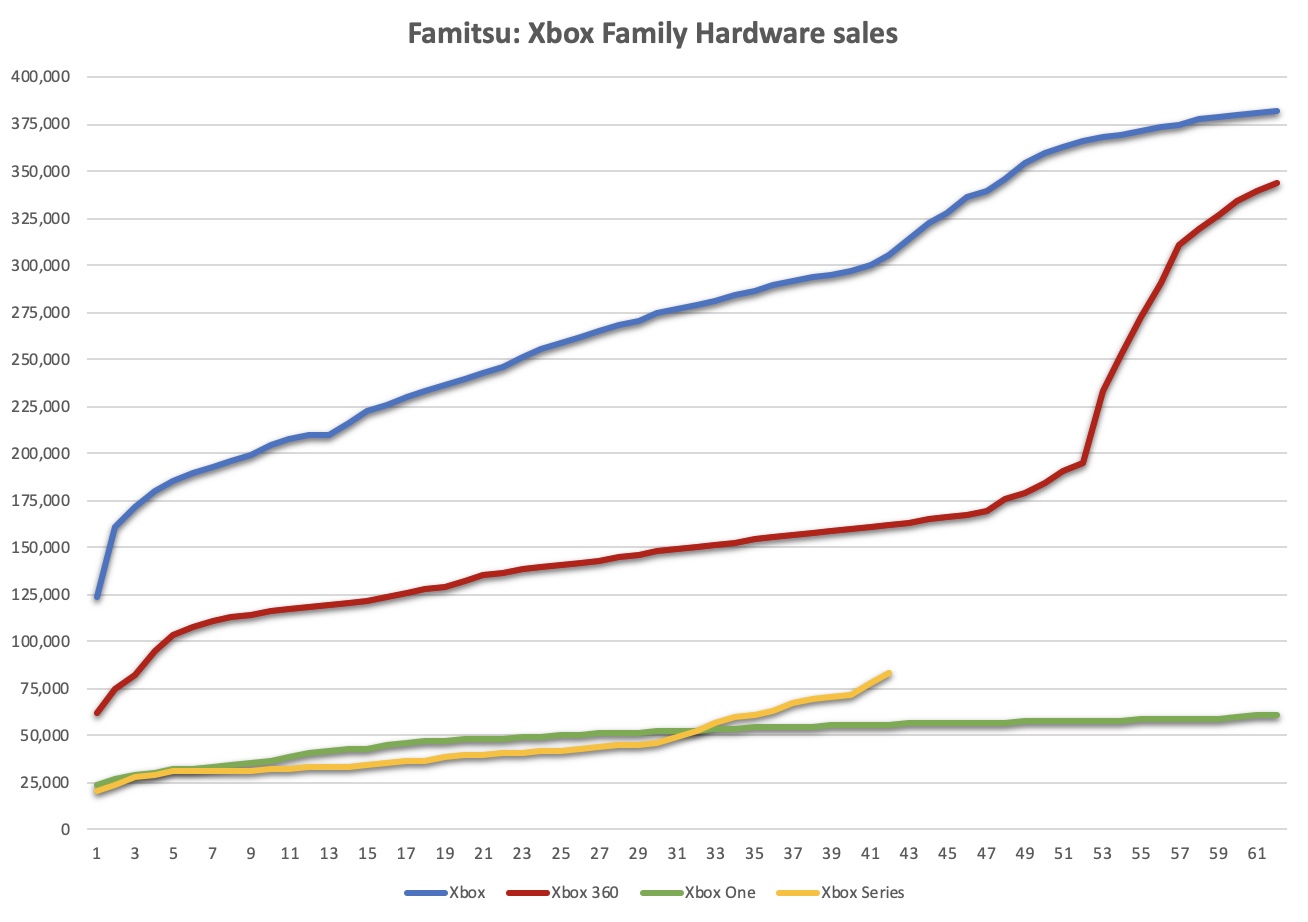 So it took Xbox One more than a year at least. Let me go look up the exact figure.

Damn, that was terrible.

Here's hoping the XBS can top the og Xbox.

I think it can top OG Xbox lifetime possibly, though it definitely won't catch up to it this year, as OG Xbox was very front heavy, as you can see on the graph it sold 375k of it's 530k lifetime in just the first 61 weeks. But lifetime though, I think passing 530k is doable for Xbox Series, though MS is going to have to invest into Japan some to pull that off. OG Xbox had Japanese exclusives like Ninja Gaiden, Dead or Alive 3, Phantom Dust, Panzer Dragoon Orta, and Otogi, so far Xbox Series has no Japanese exclusives (aside from some small indies), and Xbox's only Japanese 1st party studio is working on a game that will be timed exclusive to PS5, Ghostwire Tokyo (and even then Tango's games appeal more to the west than they do to Japan, Evil Within only sold like 300k in Japan, compared to more than 10x that many copies in the west). Microsoft is going to need to invest in games that appeal to a Japanese market, either acquiring some more Japanese studios, or making some strong JP 2nd party exclusive deals.

I know people will laugh, but its actually great to see the XBOX doing well in Japan. The 360 was selling these numbers on a average week and that had the market to itself as well as massive investment.