They get you with the massive mommy milkers, but then you stay for the rest of the roller coaster.  Here's my review of #REVillage

Yes, I noticed that the hashtag from Twitter dragged over the image icon, hehe!

How does its length compare to other games in the series? I know RE3Make was dinged for being short.

I took my time and still was on the lower end of 9 hours at the end of the campaign.  I PURPOSELY spent time in Mercenaries and started a second playthrough just to rack up some hours, but it didn't feel like "here's everything you missed!", so the vast majority of people are probably going to clock around 9 hours and then not pick the game up again (perhaps until there's DLC).

I get that that's like half of RE4, but what about RE5, 6 and 7 or RE2Make?  I remember RE4 being an outlier in being longer than the other games in the series I played.  It would be helpful to get an idea of how it compares to the whole series and not just a single game. 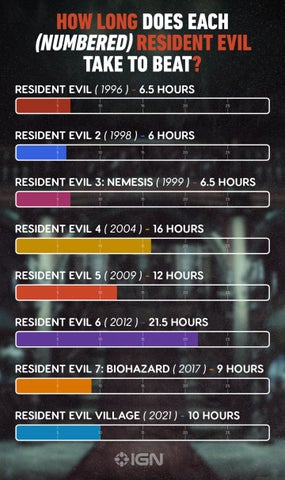 While it's true most RE games clock in on the shorter side, we DO need to hold devs to higher standards, or in this case, at least RE4.  Apparently, a lot of the game was influenced by RE4 except one of the most exceptional parts: content.  However, RE5 and RE6 were both quite a bit longer, as I think RE5 was about 14 hours, and RE6 was about 17 hours.  You can look all this stuff up, though, lol

Having said that, RE8 summarily comes in on the short side, even though there are shorter RE experiences.  But this is 2021, we should expect our devs to be able to craft more detailed experiences considering the massively improved tech that is available.  When a car went 0-60 in 6 seconds 30 years ago, that was "fast".  Now, that's "slow".  The times change, and one has to consider that many other games costing the same amount provide far longer experiences or offer much more content.  The "not every game has to be long" rhetoric is mostly coming from Sony fanboys who are trying to justify Sony's push for $70 games.

Honestly, this seems pretty accurate to me now that I'm going through the series. Though, RE2 is in that weird phase where a lot of content is reused in the different story routes, but you arguably haven't beaten the game till you do at least one combo of an A route and B route, which brings up the games length to about 9 hours.

REmake 1 is like 11-13 hours given the difficulty and the fact that it actually has a more complex map. REmake 2 is like 8.5 hours.

Thanks.  So it does seem RE4 is indeed the outlier.  RE6 kind of cheats by having 4 different campaigns with each campaign being pretty short.

It is kind of disappointing that the new game is shorter than previous games, especially when they already had a game in this same style to work out the kinks.

RE4 really was a special game.  Its level and encounter design were top-rate throughout and its pacing was top-notch despite its length.  It's amazing how much better the first 'trapped in small village with an endless number of zombies and a miniboss' scene is in RE4 compared to the same scene in RE5.  The area in RE5 is so much smaller, has so many fewer options, and the spawn-points are blatantly obvious.  In RE4 it feels like you're scrambling through a real village.  In RE5 it's just a shooting gallery.

I'm happy I'm not the only one the game tricked into selling ingredients before the kitchen unlocks.

I actually prefer RE games to be on the shorter side. People have this obsession with long games but I would prefer some games to be shorter. Now there is an argument to be made for not charging $60 for these shorter games and that I think is more reasonable. $45 I think would be more reasonable. Honestly I always wait for a sale on RE games (except RE2 remake) so maybe that's why I'm more ok with it than others.