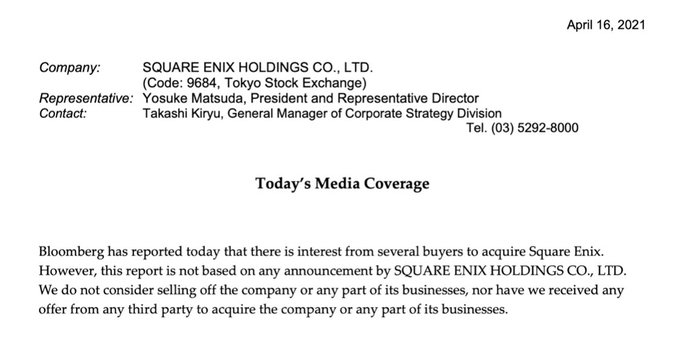 They are citing two Japanese bankers who are familiar with the matter.

Edit: Xbox insider Shpeshal Ed reporting that Microsoft is one of the interested parties:

Microsoft is one of the potential buyershttps://t.co/j0qFgUlWio

The most likely possibilities would be:

Hope it's not Microsoft though, I have no intention to buy any Xbox in my life and it will suck hard for me to mount expensive PCs to keeping playing Square games

Sony and Tencent would make the most sense to me as potential buyers of Square Enix. Sony and Square Enix have had a close relationship for a long time, which is similar to the relationship between Microsoft and Bethesda. Tencent is well...Tencent. They have the money.

Worth noting that Square Enix is currently valued at about $6.9b on the stock market, value could be driven up with an acquisition.

I'd ather they stay the way they are, but if someone needs to buy them I would lean Nintendo to keep the hope alive of them one day making Super Mario rpg 2. I doubt Nintendo would make a major purchase like that so I wouldn't completely hate it if Sony bought them.

I highly doubt Embracer is even considering this.

The acquisition makes a lot of sense for various parties. Sony seems the most logical considering their relationship (as mentioned).
MS has the money, but at this point they would literally be buying games away from the largest market for SE games (outside of Nintendo).

Nintendo and Microsoft have become pretty chummy lately. I could see Microsoft jumping on this and playing nice with Nintendo, but I have my doubts.

I actually wouldn't mind that much if Square got split down the middle, with say MS or Ubisoft getting the western division (Eidos, Crystal Dynamics studios/Tomb Raider, Deus Ex, Just Cause, Sleeping Dogs, Thief, etc. IP's) and Sony or Tencent getting the JP division. Probably an unlikely scenario though. Whoever buys it will most likely want the whole thing.

I do think that if MS went for Square, they would at least give Nintendo late ports of Square's games, could be hard to turn a profit from Xbox and PC alone. Some would buy an Xbox or a gaming PC just to keep playing Square games, even in Japan, but certainly not everybody, so late Switch ports might be the best way for MS to turn a profit in such a scenario.