During a fighting game developer round table earlier this month, Katsuhiro Harada revealed that nearly 60% of players use a WiFi connection for fighting games.

This considers all players worldwide, and for Bandai Namco's titles such as Tekken 7, Dragonball FighterZ, Soul Calibur 6, etc.
He also noted that the rate of wired connection is high in Japan, but low worldwide.

That means that more than half of my matches have been against a WiFi user...?
This is a much higher number for fighting games than I imagined. Because fighting games generally don't retain casual players for long. And the ones that stick around will probably come to understand why a stable connection is so incredibly important to this particular genre.

There are flat LAN cables that can get under pretty much any door, and you can run them along walls to avoid cables across the floor.
People that say their WiFi connection works just fine for them likely either don't notice the difference, or it may run fine for them but horrible for their opponent. (One sided roll back, Drifting, etc.)

Here's a conversation from Keits who is a fighting game developer, and worked on Killer Instinct which has arguably the best netcode of any fighting game. 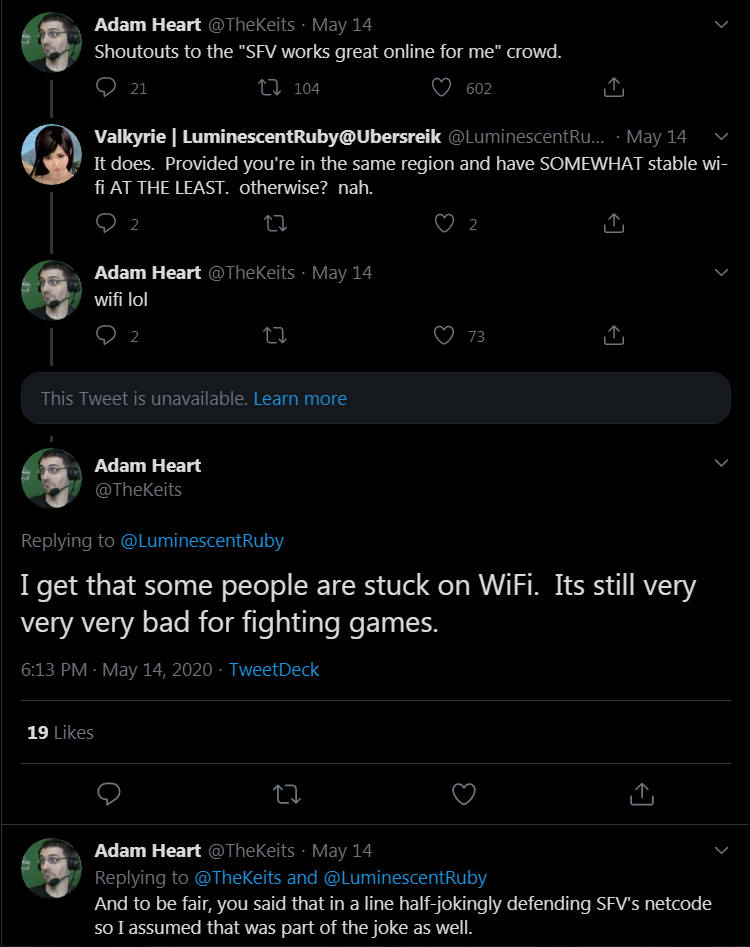 If someone want to play Resident Evil co-op on WiFi, that's fine. But subjecting another person to a WiFi connection in a fighting game if you have a choice is no bueno.

Some people have no other choice, while others don't care enough to make an effort.
So luckily more fighting games are now implementing a WiFi indicator for your opponent when you get matched up with one.

Tekken 7 implemented this a few days ago. DOA6 and MK11 already had it.

And hopefully every single fighting game follows suit and makes this standard.

That way Wifi players can play each other, or people who are ok with playing against them. But more importantly it lets the rest of us decline any such match requests. I will never again play against a WiFi connection in any of those games.

The elitist attitude of that Adam Heart guy. Bet if I said that I play Tekken with the dual shock he'd 'lol' at that too.

Playing on Wifi isn't about being the best and some players just don't get that, too stuck up to realise just because you like and play games, doesn't mean you have your entire house wired up like server room.

If and when I do play Tekken online my issue isn't connection via wifi or whatever, it's finding good fair opponents near me.

If you read the rest of the conversation, he thought the person was making a joke. WiFi players are a well known bane in the FGC, and that person combined that remark with another unbelievable comment defending Street Fighter V's ¨notoriously bad netcode, so I can see why he thought this person was being sarcastic.

As for Dual Shock, a lot of pro players use it for various fighting games. It's even considered to have some advantages over fight sticks, so no one laughs at something like that today. But again, he thought that person was joking.

Not surprising at all. The percentage probably looks a lot different on the top 100 leaderboard. It's the same for any competitive online game, the majority of people sit in the middle of the pack and don't care much about the highest fidelity. For example in Rocket League the majority of players is on consoles, yet when you reach the top percentages they become quite a rare sight.

People that run cables knows how much more convenient it would be to just not have them. But they make an effort to not cause bad gameplay experiences.
Fighting games on delayed based netcodes with packet losses are just unplayable and a waste of people's time.

I have a wired connection. Always have but, at this point, I realize that gaming is too serious for me. I just wanna face fun.

My router is in the other room. On the other side of the wall where my PS4 is. Can't be helped. I have not used Ethernet in about 5 years. I mean I do have a 3ms ping and 500MB up and down with Google Fiber so still a solid connection. I also don't play seriously in the few times I do.

I have no issue with any online game, fighters included, by using my wifi connection. It is just more convenient and I don't really notice much of a difference between the two, if at all. Wifi has come a long way over the years afterall.

Now it should be noted that I do not play in tournaments or at a professional capacity, in which case I would want every advantage I can get. But niether do most people, so this percentage is really not surprising at all.

not sure if it's the poor netcode or the amount of wifi users, but fighting games seem to be the very worst when it comes to online play. The connection quality is always terrible.