"Today at Hot Chips 2020, Microsoft will detail more of the internals of the Xbox Series X system architecture. Much of the information in the pre-published presentation covers details we already knew, but with the new slides in hand, there are some additional juicy morsels inside, including a diagram of the processor die."

"Taking a closer gander at the die shot, it looks as though the full chip includes up to 56 CUs. (Feel free to correct us, as counting these things can be a bit tricky.) That's because with a relatively large die, yields of functional chips can be greatly improved by building in some redundancy. If our counting is accurate, it suggests AMD and Microsoft have only disabled 4 of the dual-CU clusters, and of course all eight of the CPU clusters have to work in order to get a functioning chip." 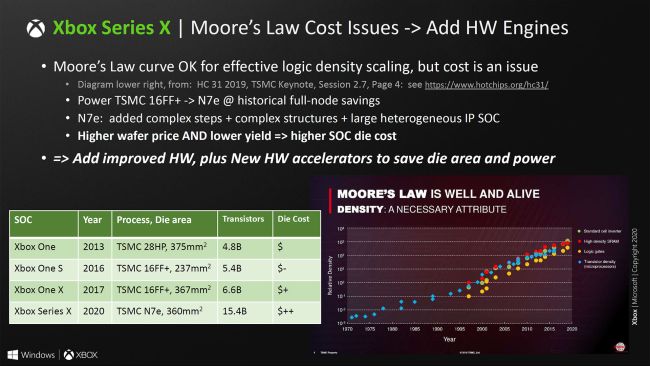 Avg cost of chip is abit higher (due to extra CU's), but buildt in redundancy, incase of faults, makes up for it.

Basically go read the article on Tomshardware.
It goes into details about stuff like the SSD, Raytraceing, ML (which is 100% confirmed now), HDMI 2.1 (120hz support) (No displayports), formats it can encode and decode at ect.

The short of it however:
The "apu" cost more than the one inside the Xbox One X.
The ram, storage(ssd), cooling, caseing.... everything is more expensive than the Xbox One X's, and that console launched at 500$.

This is more proof that these consoles are probably over 500$.
Unless Sony and MS are willing to sell them at sizeable losses.

Series X has a a part that handles audio too: That cost slide is making me think it could reach that $600 that DF was suggesting or even $549. I am fairly confident Series X won't be priced lower than $500 now more than ever though.

Something tells me the PS5 chip is cheaper.
Its supposedly only 36 CU (with no redundency's) and the Xbox Series X is 56 CU's (with 4 disabled).
Thats gonna amount of a large differnce in the size of the APU inside both.

If playstation launched at 499$ while the Xbox Series X is 599$, that could account for why Phil Spencer resently came out and said "Selling as many consoles as Sony or Nintendo is not our approach". This could be a case of, if you want 20% more performance than the Playstation 5, you need to pay for it.

Good stuff, but that price comparison between models is a little concerning, still MS can subside it if they want. They gave a tip to Sony though.

Xbox One X, launched at 500$.
Now every part of the Xbox Series X is more expensive, and you expect the same price?
If it happends, its because a loss is taken on each unit sale, thats in the order of probably 50-100$.

I think this is more likely to play out:

I think 599 is possible only if Sony use the same pricing.
Spec/cost wise it makes more sense at 599 but if the ps5 goes for 499 I bet Microsoft are willing to subside to match that price.
Sony are probably in the exact same situation which is probably why both of them still did not reveal pricing.

Both consoles will be $500, that was always going to be the case.
Any cent over $500 and its dead on arrival, that would be really stupid.