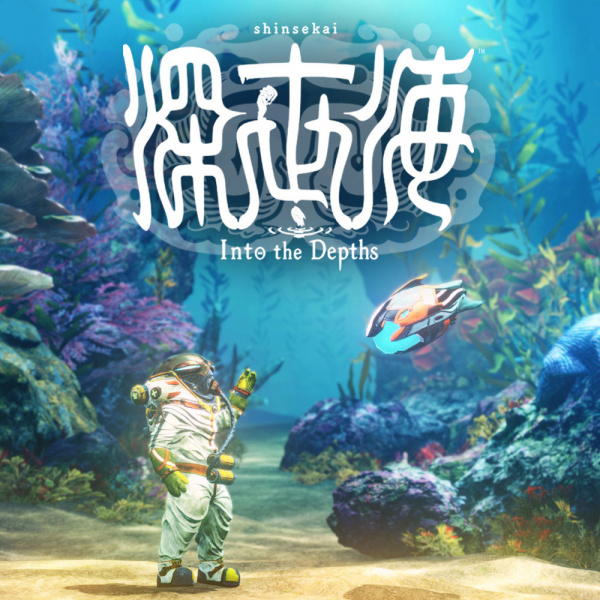 - First and foremost the art direction is top notch and more than makes up for what the game lacks in graphical prowess. CAPCOM continues to show that in regards to creature and mechanical design, there are few that match them. Environments are also well done having a beautiful clash of post apocalyptic scenery mixed with remnants of some other advance civilization all nicely submerged in water and ice.

- Sound design was also crafted with a unique touch. Game encourages that you play with headphones on and you should listen. Everything sounds as if you are under water. That little touch enhanced the experience so me that I refused to play this with no headphones on.

- There is not a spec of dialog in the game (ignoring tutorial prompts). Who this "Aquanaut" is, what he has been doing and why a simple cave in inspired him to takes this journey is not (clearly) explained. The only bits of "story" we get are through these logs that resemble concept art. I was only able to get an idea of the major plot through reading the last entries of the encyclopedia/model viewer. Not necessarily a bad thing as the mystery of trying to piece things together is compelling enough, but it is totally possible to play the entire game and not have any idea of what is going in regards to the major plot.

- As noted, the game takes place entirely underwater, but because of the suit the Aquanaut wears he moves as if he has has two 10 ton weights strapped to his ankles. His walking speed is incredibly slow and his jump is pretty much useless. He also has the ability to climb vertical surfaces very slowly as long as he has stamina to do so. Samus he is not but thank God his suit comes equipped with thrusters that allow for 360 degrees of movement and a quick fast dash at expense of burning more oxygen.

- Oxygen functions as you life bar. You run out you die. It can be restored by vents that release air bubbles. Life gauge can be increased by collecting extra oxygen tanks but unlike Metroid they are not permanent. They can be destroyed. You know how you will destroy them most of time? Impact damage. Thrust into a wall or fail to control your descent will, depending on how you land, crack or outright destroy tanks. You want to keep as many tanks on you as possible to prolonged exploration before needing to refill oxygen. You spend a lot of time in cramped spaces solving small environmental puzzles so smacking into walls or taking hard falls will become common. You have to balance between slow oxygen saving advancement and quick ground covering but high cost movement.

- When you are not smacking into walls you'll be smacked by whatever creatures you happen to run into. They can be organic, which are not always aggressive or mechanical which are always aggressive. Regardless, they hit hard and they can be slightly difficult because of how clunky combat is. Your basic attack is very short range but fast swing that does decent damage, but you really don't want to be that close to anything. You will eventually gain guns but trying to evade attacks, while setting up a good shot and trying to keep oxygen levels on mind can be a tad bit annoying because how tanky the Aquanaut is. If you die you return back to the last time you saved. Yes, there is no auto save so save frequently to cut back redoing stuff.

- I cannot help but be reminded of the Ecco the Dolphin when playing this. Lost of similarities.

- Typical of this genre the journey will lead you to various power ups. These can be weapon, support or item based. Nothing as interesting as you would find in a Metroid game(except one movability upgrade) but they are all mostly useful throughout the journey. They can be upgraded by finding materials scattered about the areas upping their effectiveness. Materials are also used to craft ammunition for weapons and support items. The most important material is the kind that allow you to upgrade your suit. You can only explore waters up to a certain depth(shown by red waters). Decide to go deeper anyway and you'll be crushed. Game play loop is typically explore current depth limit, find ancient stuff, get new coordinates, level suit up to reach new depths, repeat.

In a world where Metroidvanias are a dime dozen, Shinsekai is like the needle in haystack. It strives to be a little more than just another not Metroid/Castlevania; It wants to craft a different experience. I think it succeeds. I hope this was not just some experiment that we never see again. A another game designed around a console has so much potential.

Good review, I enjoyed my playthrough. I agree with the 8/10 score. A nice little game I beat in just shy of 15 hours.