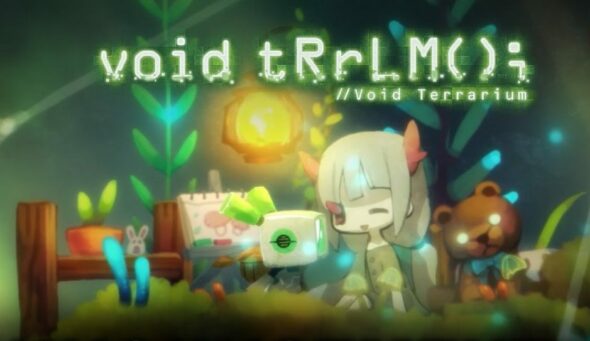 Void Terrarium is another one of NIS's experimental titles. It combines the Mystery Dungeon genre with a Pet Simulator. You play as Robbie and with the assistance of a factoryAI, take care of what is believed to be the last surviving human.

- Presentation is nice. When outside of dungeons we get some nice HQ 2D work, special mention to Toriko(the Girl), and inside dungeons comes the 3D models which while being simplistic, have a nice texture work them that make them look almost painterly or even sketchy. Whatever it is, it looks good. Soundtrack to the game wants to invoke the bleakness of the world and it gets the job done with its very moody sound. I like a couple of tracks but it is not something I would listen too by itself as I feel the game enhances it.

- The ability to cut out the randomness over time.

- The acquired blueprints are not just for stat gains. They are also used to decorate the Terrarium. Toriko essentially lives in a fishbowl and you have the option of livening up it for her. There are over 100 pieces of decor and you have the ability to scale, mirror, and rotate them to your liking. There are also 4 different depths that you can place decor on and to top it off, Toriko does react to items placed her tank. You go ahead and flex those Mario Maker/LittleBigPlanet muscles.

- More on Toriko, She is the pet sim part of the game but I did not find managing her to be all that challenging. She needs to eat, have her shit cleaned up, and played with. The most trouble with her is finding food ... that is also low in contamination(can be a pain), but Toriko has her own blueprint perks that help with that as well. She can be hit with a variety of different illnesses. Now you may be asking, "Why is that good?", Weeell they're about the only thing Tokiro herself really offers beyond just needing to be cared for. Really fucked up shit happens to her and the methods for restoring her to proper health are even more ridiculous. I like that they are all based off real world illnesses with over top exaggeration. NIS had fun these, and so did I.

- A Mystery Dungeon is only as good as its enemies and I think the NIS did good job on not just the design(I love the designs) but mechanics of each enemy. They all are a threat to some degree because each have something about them that can make a good run into bad run very quickly especially if teamed up with with right buddies.

- Dungeon Design is the most uninteresting thing about game and all my complaints are linked to it. I get its a Mystery Dungeon game, but more could have been done to give each location a bit of personal flavor. You have Bio Lab, Hydro plant, Manufacturing plant, ext, but really its just the yellow, blue and red dungeon. This added flavor could have been achieved by...

-  More Enemy variety. I like the enemy roster but there are 30 unique enemies in the game with a total enemy count of 100; 60% of the enemy list are recolors. Some enemy types have 5+ different variations. Just 10 more types and restriction to no more than 3 variations would have done wonders. You know what else could have helped? ..

- Unique Traps/hazards. The game employs the standard traps and they are used liberally. I can't tell what tenses me up more, a room full of powerful(and annoying) enemies are the fact that every other step is a fuckin trap.

- Status effects while potent like they're suppose to be, don't fair any better in creative and variety department. I find that too many status effects do the same thing, mainly limit and/or take control away from the player. Off the top of my head 5 do just that. That is 4 too many.

- The dungeon part of the game feels very rudimentary. Definitely had the least effort put into it.

The Something to think about:

- Just for those that don't know, Mystery Dungeon games are heavily lucked based. You lose any levels you gain in a dungeon upon death or completion and any items on you minus food and creation items are turned to resources. Even with the ability to shave off a little of the randomness, it is still a majority random game and completing main objectives to advance the game can take time. I must of died over 100 times and like 50 of them was from trying to get past a certain late game dungeon. Blueprint stats can only get you so far. You will eventually win if you press on but if you the type to give up easily ... then ya know.

I went into Void Terrarium expecting it to be something that I put down after a few days and never come back to, but I walk away pleasantly surprised, satisfied, and with one more Platinum added to my ranks. Definitely a surprise hit for me. I enjoyed my time and will be holding out for a sequel.