Forums - Gaming Discussion - Farcry 6 Only 4k and HDR on Xbox one X and series X, not Ps4 or Ps5, so weaker hardware now confirm?

Thank you for Clarification

So the SSD on the Ps5 isn't making all the magic Sony wants or the hardware is just very behind campared to the XbsX, thougths?

So basically OP your title is misleading.

"Amending our previous reply: The highlighted text in the above image refers only to the Xbox systems which will run FC6 in 4k Ultra HD (Xbox One X & Xbox Series X). Ubisoft Support has no information to add about other systems at this time."

^ doesnt mean only XSX has 4k.

Exactly this - I've seen this story on other sites as well, and it should have never been a story to begin with. On a side note, it is going to be a job on Microsoft's part in order to properly communicate their whole Smart Delivery system to the boxed retail market. Because of Smart Delivery, there isn't a "Far Cry 6 Xbox Series X" case. There is only a "Far Cry 6 Xbox" case, because inside that case, the disc supports Xbox One, Xbox One X and Xbox Series X. So then, on the case itself, Microsoft has to cover their butts on which features (4K, HDR, high framerates, Ray-tracing, etc.) apply to which consoles.

Incorrect. And also fairly embarrassing to say the least.

It just means it will only be on the X1X and the XsX. 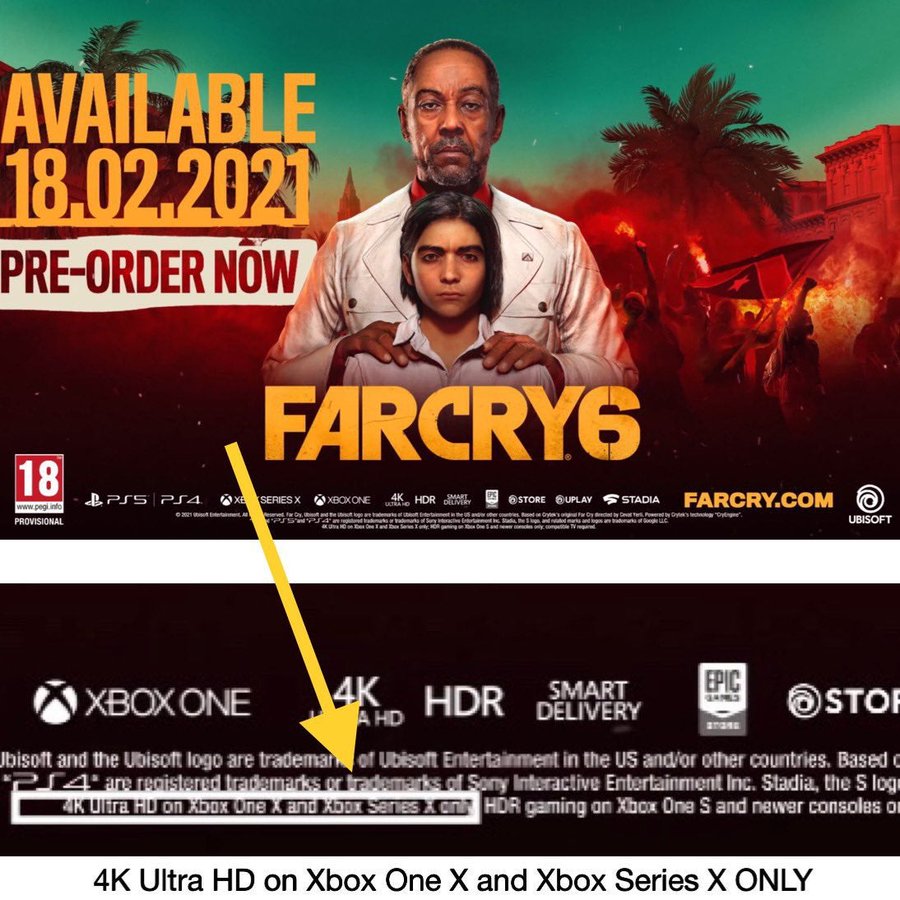 Amending our previous reply: The highlighted text in the above image refers only to the Xbox systems which will run FC6 in 4k Ultra HD (Xbox One X & Xbox Series X). Ubisoft Support has no information to add about other systems at this time.

Probably, but it's weird 4k is not a trademark of microsoft and they are not commenting about if the PS5 at leats can run the game on 4K and this game is inter geretional so all this is at least not common, remember last gen where every publisher was talking about how 1080 p on ps4 and 900 p on xbox one, so why now  they only say we can not comment about other systems?.

Microsoft seems to have marketing rights for FC6. Phil Spencer also made it in Ubi's conference. and you can see how Xbox is promoted since the reveal. They didn't mention other consoles other than Xbox, which is probably the deal made. Nothing to see here :P

Edit: Just read it again, and the part after on the poster too... it's referring only to the XBOX consoles by the look of it.

Did you not read the thread? Isn't it odd that as a mod you just jumped to the end after reading the click bait headline?

The OP says a lot about the intentions behind it.