Between DK's blockbuster 1994 comeback and the 1995 sequel, which do you think is better, and why? 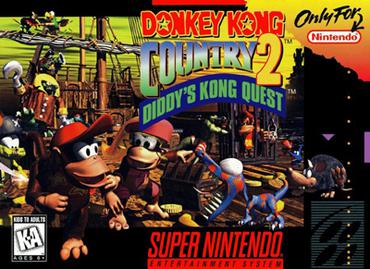 2. Animal friends were more fun to use, better level design IMO, and much better use of collectables that actually makes you care about looking for them.

Yes! All of the above, and; the music! The soundtracks are both beautiful, but 2's music is just consistently great!

The one that's better, because it's quite obviously a lot better in every way.

Diddy's Kong Quest is the better game in all areas. It's considerably longer, has more varied level designs and bosses, offers more moves for the characters, is more motivating to get 102%, has the better soundtrack despite the first game being already great at it.

And most of all, it's not sexist. Both a male and female protagonist are in the game as opposed to the first game which championed male dominance.

DKC2 by far. The characters were more fun to play with thanks to each having their own standout abilities. The levels were more varied, the bosses more fun, and the soundtrack was just all around better.

I played DKC1 a lot more, so I won't say which is better but I certainly enjoyed the first more.

2 by a wide margin. 2 had better graphics, sound design, level design, theming, bonus stages, more to do, was longer, had more varied design aspects, (So much so that now I wanna play it again.)

I think the real fight is between 2 and 3. I say that because 2 had the better theme, art direction, and sound, while I thought 3 had better level design, more to do, and all the aspects where it lost to 2, it still did astoundingly well. 2 and 3 are equal to me, but I still think 2 is the most memorable due to the pirate theme.

2 is the better game in every regard, specially music. DKC2 is actually my second favorite platformer of all time, behind SMB3.

My favourite platformers (in no particular order);

Ratchet & Clank (as a series? not sure if this counts, more like shooters)