By Austin Wood 2 hours ago

Whenever it finally comes out, that is 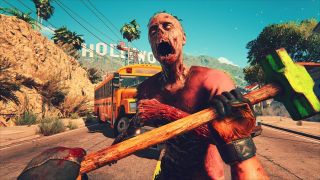 A job listing at Dambuster Studios, the new developer of Dead Island 2, suggests the long-awaited zombie sequel will be available on both current- and next-gen consoles.

The listing in question is for the position of art director. It specifically cites "the next installment in the world renowned Dead Island franchise." More pertinently, of the eight job listings on Dambuster's site that are related to Dead Island 2, it's the only one that describes it as "a ground-breaking title for current and future platforms."

This isn't 100% infallible confirmation, but it is a pretty solid indicator that Dead Island 2 will be a cross-gen game. It's darkly funny that Dead Island 2 has been in development for so long, and has changed hands so many times, that an entirely new generation of consoles will likely launch before it. At the same time, it may make financial sense for Dambuster and parent publisher Koch Media to target new platforms as well as existing ones. If they're available, the market is big enough, and porting to next-gen isn't unreasonably difficult, why not? Hell, maybe a new console generation will give the game the shot in the arm it so dearly needs.

Because cross-gen availability aside, the bigger question with Dead Island 2 is when we'll get to play it - which is still better than wondering if we'll actually get to play it, which was unclear for several years. The project shifted from Yager Development to Sumo Digital and finally to Dambuster, and while Koch Media maintains that "Dead Island is a very important brand for us and we've got to get it right," we haven't seen any sign of life from Dead Island 2 in ages. At the same time, Dambuster is clearly hiring for a reason, so we'll just have to trust that we'll hear something before the heat death of the universe.

Here are all the upcoming PS5 games and upcoming Xbox Series X games that we know of.

https://www.gamesradar.com/dead-island-2-will-be-a-cross-gen-game-according-to-a-new-job-listing/
Additionally, once famed leaker turned game developer, Shinobi602, responded on the Era thread about this and said he heard that the core tech being used in Dead Island 2 is pretty amazing.

I just hope it will be released at this point.

Wait, what? I thought Dead Island 2 released years ago! Is it still in development?

With the gen coming up or the one after that?

No, maybe you're thinking of Dead Island Riptide? Dead Island 2 was announced at E3 2014 with plans to release in Q2 2015. Started out being developed by Yager, that was the version we saw Gameplay of at Gamescom 2014, but then in 2015 there was some kind of falling out between the publisher, Deep Silver, and the developer, Yager. Deep Silver announced that development of the game was being transferred from Yager to Sumo Digital, and it was assumed that development was completely restarted at this point. Development continued under Sumo from July 2015 until August 2019. During this time we didn't hear much about the game, other than a rumor that Sumo licensed the cloud tech they were using on Crackdown 3 to use in Dead Island 2, presumably to be used to fit more zombies on the screen at once. Then in August 2019 Deep Silver announced that development was being transferred from Sumo to Dambuster, one of their internal studios, for the final leg of development. The fact that job listings say it is cross-gen probably means that release is planned for Holiday 2020 or sometime in 2021, I doubt they would release a cross-gen game in 2022.

Damn, no one will buy it now..

Wait, so Riptide isn't the sequel of Dead Island? I hate when companies do that.

I like the first Dead Island, even if some missions are frustrating.

But man, that sequel sure is taking time. It's been what, 6 years since I first saw the trailer...?