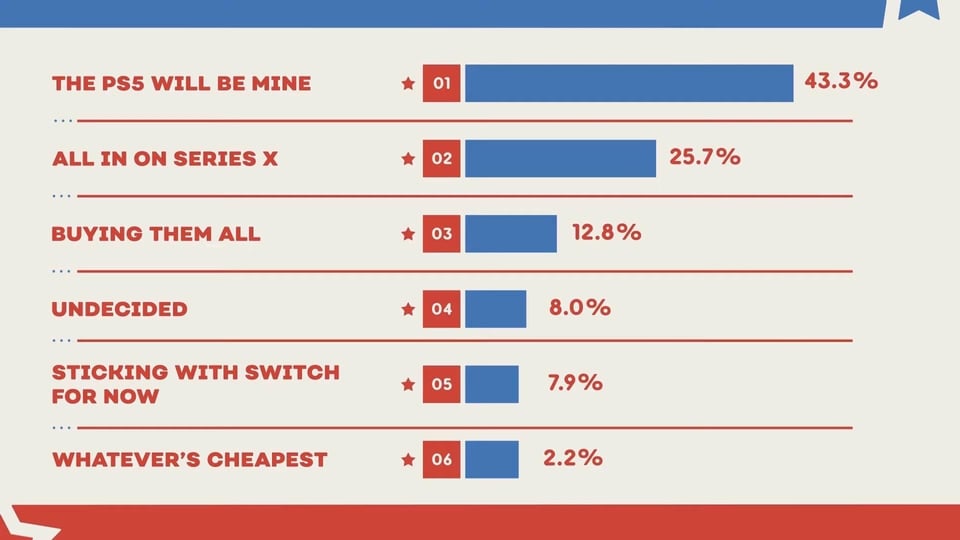 There are some things I find interesting about this poll.  For one, Sony has been the most silent about their system, whereas MS has been talking heavily about it, even showing demos running on the HW and the actual console.  Many have been saying that Sony is "fumbling" the messaging with not only its silence, but also with the way they chose to reveal the info they have revealed.  This stands in stark contrast to MS, who many believe have been hitting their messaging out of the park. This, however, seems to not have changed things much.

Secondly, some people have made it out that the ~18% difference in GPU power is insurmountable and will put PS5 a big disadvantage when it comes to 3rd party multiplats.  It seems pushing this false narrative everywhere hasn't really hurt the PS5's appeal.

And finally, and maybe more importantly, one may think that of course the PS5 will have the larger number, as it is the largest when it comes to WW brand power.  The only problem with that is that IGN's traffic skews very heavily towards the US.  These are mainly going to be US gamers answering this poll.  It will be interesting to compare this polls results with actual sales in NA.

Thoughts?  Which do you plan on buying?

Coming off a gen that Sony dominated, and MS game output was mostly lackluster, those results are actually pretty good for Xbox.

As far as I know, Gamespot is the major go-to website for Xbox gamers while IGN's visitors skew towards PS, so primarily US traffic doesn't automatically translate to an Xbox bias in the sample. You'd have to look at previous PS vs. Xbox polls of any kind on IGN in order to determine the bias in the sample because console sales aren't going to work.

IGN has many Sony fan boys than Microsoft. Not surprised.

And those 2 sites do not represent the average gamer,do most of PS European marketbase ever come close to a gaming website?

Looks like Microsoft has a heck of Battle for the hearts of consumes.

That's not relevant for this thread. The point of this thread is to show that the recent negativity concerning the PS5 is overblown and Sony's still doing well in mindshare and purchase intent. But whenever one is looking at numbers, one must think about how numbers were compiled in order to understand what they really mean, hence my post. What one can judge from an IGN poll is the consensus of IGN's readership and in order to gauge if and how much mindshare Sony has lost among IGN visitors, one needs to compare this poll to previously conducted similar polls on IGN.

My point is that a PS lead in this poll may look positive on the surface, but that isn't necessarily true because it's possible that PS used to have a larger lead on IGN in the past. But that's for someone else to research. I was merely pointing out the flawed logic of the OP.

I saw two early IGN polls showing PS4 vs XBO.  But, there is no way to compare them really.  The first one had PS4 at 74.8%.  It was released before they launched and occurred around E3, when many gamers, including some Xbox diehards, were revolting against the Xbox brand with its DRM and focus on TV.  The second was taken shortly after launch, without XBO's DRM, but it was still the weaker HW and cost $100 more.  PS4 dropped to 68% in that poll.

I picked sticking with PS4/XBO... I'll eventually get one (or both), but probably not for 1-2 years after release, and then it will depend on which either plays better (individual specs can be misleading) or has more interesting exclusives. Of course a launch title could change my mind, but I haven't been that exited about a new title in a long time...

So PS is down and Xbox is up.