To begin I would just want to let you know that if you came here expecting one to be much better than the other, you are going to be disappointed.

GPU & Resolution
Aka 12.1TF vs 10.3TF. This is the single most stupid thing to argue about, why? Not because its just a 14%/17% performance different, or not even because with the PS5 higher GPU clock means there are things in the GPU that it would actually be faster at doing or be able to do more of than the XSX GPU; but because a lot of people are using an antiquated way measuring performance. A way that devs no longer use.

This is not like 2013(PS4 vs XB1)/ 2016(PS4pro) & 2017(XB1X), where a 40% advantage in performance pretty much translated to a 40% difference in resolution. even ignoring that in both cases there was also sizeable deference in memory bandwidth and in one case (XB1X vs PS4pro), + amount.

No, its the age of variable resolutions. And understanding this would make you understand how stupid it is arguing about the GPU. Both consoles are going to be running native 4K at the exact same FPS, same geometry, same texture detail, same everything. How is that possible you ask? Simple, because devs would have the same rez target or both and the same framerate, but what would be scaled would be the resolution.

I could also be talking about things like cache scrubber and coherency engines...etc... but let's just keep this simple and to what people would actually see.

SSD
This is another bone of contention apparently. Yes, no argument here, the PS5 SSD is over twice as fast. But would it really make a substantial difference? No. No, it would not. Why? diminishing returns. Its one thing comparing 5500MB/s SSD to a 55MB/s HDD, yup, that one is easy. You are getting 100x the performance. But comparing a 5500MB/s SSD (PS5) to a 2400MB/s SSD (XSX), just nets you ~2x the performance.

Don't et me wrong, I am not saying the PS5 SSD is just a waste, but rather that where it would make a difference isn't really where most think. It would make the PS5 easier to develop for. And in turn, easier to optimize for. This has a lot to do with data streaming. It would also make it possible for the PS5 to have a little more RAM available to devs than the XSX (depending on how sony decides to implement this that is).

Basically, whatever the XSX can do with its SSD, be it stream in more data into RAM, or load games faster... the PS5 would be able to do it better. But this wouldn't matter because the XSX can already move a respectable amount of data. Now if we were talking about 24GB of RAM consoles and 300GB sized games, then the faster SSD in the PS5 would wipe the floor with the XSX SSD. But we are talking 16GB of RAM consoles, more specifically ~13.5GB - 14GB of RAM consoles... .. even more specifically, around ~5GB - 8GB of RAM cache consoles lol. Yes...  ~5GB-8GB. That's how much RAM these SSDs really need to worry about feeding because that's where the CPU and GPU Native heaps pull their new data from.

The PS5 should load into games around 1 or 2 seconds faster though; so its at least got that going for itself. For all that is worth...

That's it, those are the two main areas that make these consoles different but as you can see makes them still very similar. I hope that helps.

Adding to your argument this might come in handy

This a testimonial from EX - Crytek Developer

As popular and confusing as that tweet has been, a 280 character hot take is neither useful nor educational. Here's a proper summary of the complications of judging a videogame console by its teraflop:https://t.co/OKb11fpcYM#gamedev

" ... A quick look back at PS1 vs Saturn vs N64, Xbox vs Gamecube vs PS2, Xbox 360 vs PS3, and Xbox One vs PS4 shows countless examples of cross-platform games that should have run faster on one particular system when looking at the specs alone, but the benchmarks proved otherwise..."

"...We’re now in an era where major consoles are sharing the same underlying architecture, and some main system components comprise the same chips from the same manufacturer — some even the same model numbers — differing slightly by clock speeds, implementation, firmwares, and APIs. If we’ve not seen a slew of reliable and predictable FPS differences between previous machines so far, we’re certainly not going to suddenly see them moving forward. The gap is closing, not widening..."

So, which computer would give the highest FPS in a game: one with a 2.0 teraflop processor in its GPU, or one with a 2.2 teraflop processor in its GPU? Now we need to look at different clock speeds, bus bandwidth, cache sizes, register counts, main and video RAM sizes, access latencies, core counts, northbridge implementation, firmwares, drivers, operating systems, graphics APIs, shader languages, compiler optimisations, overall engine architecture, data formats, and hundreds, maybe thousands of other factors. Each game team will utilise and tune the engine differently, constantly profiling and optimising based on conditions.

A 10% increase in any one of those individual stats isn’t going to give you a 10% increase in performance. The machine as a whole would need to be slightly increased to see an overall benefit, and you would only be able to determine the final gain by profiling each game, and even then it won’t scale linearly. If this was a consistent and predictable thing to calculate based on raw box stats, we wouldn’t need Digital Foundry..."

Are we calling it sex? That would give Microsoft the advantage.

Thanks for the addition!! Great read too.

i have been doing research and reading , i will add a lot of thing latter on if i find something useful.

It will depend on the games as usual. Theoretically being able to load data twice as fast won't make much of a difference when additional procedural generation by the CPU is the bottleneck. Not every tree and rock are stored on disk anymore, most are generated on demand just like NMS and Minecraft. Resolution and frame rate also depend on the type of game.

PS5 will have the edge for install, loading times and less noticeable lod changes, XSX will have the edge in stable fps and resolution. The differences in the latter will indeed be less than between XBox One and PS4 in the early years and much less noticeable especially with VRR. The difference in loading will be highly variable like it is now when you put an SSD in current gen consoles. (which are severely bottle necked by the IO bus, but still offer up to half the load times for some games in some specific instances) However on both consoles those times will not be comparing 77 seconds to 44 seconds, more like 3 seconds vs 1.5 seconds in the best possible scenario. And games with heavy procedural generation will vary much less.

Barring shoddy optimization, XSX games should look better and run better. PS5 games should load a couple seconds faster. Not a large difference, though I want to see how devs use the variance in power on PS5. For all we know, the small difference on paper between 12 and 10.3 can become larger once PS5 is running demanding games or depending on how devs utilize the setup.

That’s why all along I have been more excited about QoL features and enhancements. The load times already will be great on both consoles. Quick resume on the XSX demo they showed is, for me, amazing. I cycle through six or seven games usually and some of them are online MP games so I doubt they’ll work flawlessly, but the SP games will be great to jump right back in.

Adding HDR to Xbone games that didn’t support it, free upgrades to XSX versions of Xbone games, enhanced BC for Xbone games, etc, those are the things that outside of power jumps, are most exciting imho. When the fuck is Sony going to showcase theirs

The looking better and running better is debatable. As far as running is concerned, I believe there will be no difference between the two. There isn't enough of a difference in GPU, CPU and RAM bandwidth between them to make for anything more than a 20% overall advantage or the XSX. It's not like the XSX will be able to have higher rez textures or more geometry or run any effect that the PS5 can't.

That's why it comes down to resolution. And this is where the debatable comes in when talking about looking better. Looking better, in this case, wouldn't mean that you aren't looking at an identical game between both platforms. It would just mean that one runs at 2160p "more of the time" than the other. Both will hit that 2160p rez, but one could be running at it 100% of the time while the other runs at that rez for only 80% of the time and drops to like 2052p for 20% of the time.

And as I mentioned earlier the ceiling and floor are already very high. We aren't going to be saying ok this one is at 2160p while the other is at 1800p or even 1440p. When there are drops, we would be looking at drops to like 2052p. So yes, technically at that point the XSX still running at 2160p looks better, but not noticeably so.

Funny enough, where the PS5 does have an edge (those QoL) features you mention, are what would actually be more obvious (albeit not that important either). It would be like 1 second to go from the lobby into the game on PS5 vs 2/3secs on the XSX type stuff. Or 2 seconds to switch between games on the PS5 vs 5 seconds on the XSX.

On a side note, I am not buying a lot of the stuff MSis saying they are doing or adding to BC. Maybe my understanding of these things are limited, but you can't just add HDR to content that wasn't mastered in HDR. You can kind like change the luminosity levels of the overall damage (basically dialing contrast and brightness to 11), but unless they are going and tweaking the output file of every single game in their library, you can't just make something that wasn't mastered in HDR suddenly be HDR. You can't just give the render engine of every game an output pixel depth f 10bit from 8bit.

15% difference in power translates into a few frames, I don't know what the big fuss is about. 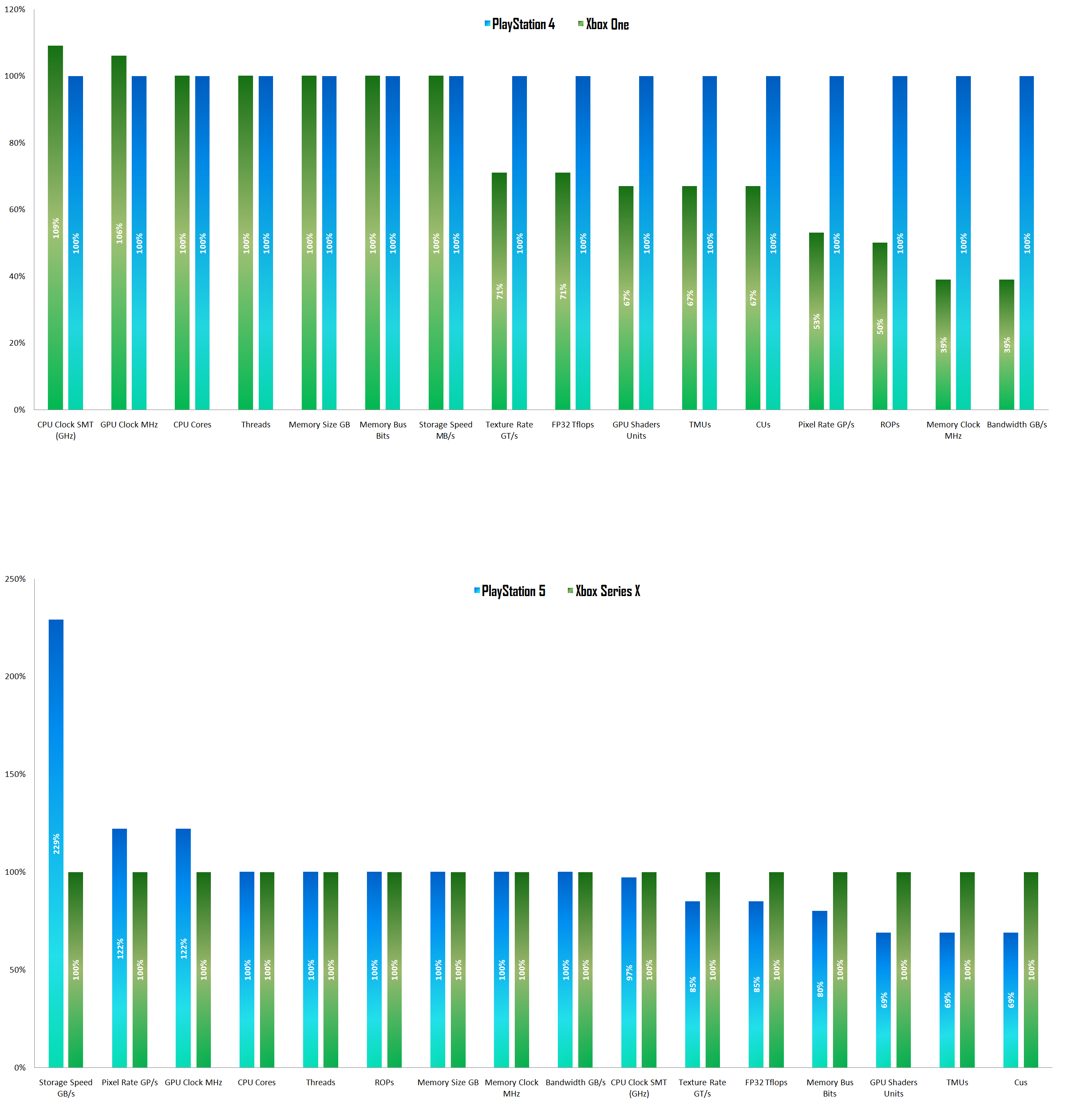