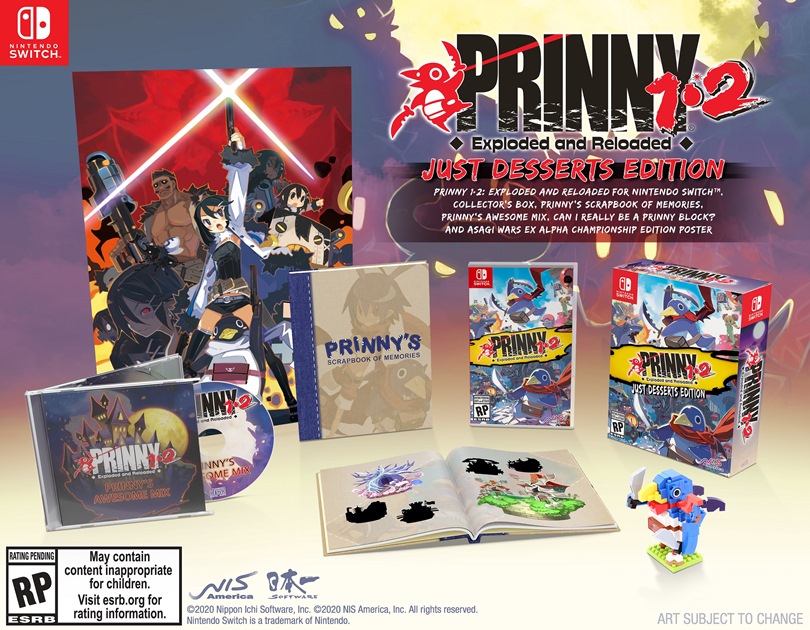 NIS America has announced Prinny 1•2: Exploded and Reloaded for Switch. Due out this fall, the collection features both Prinny 1: Can I Really Be the Hero? and Prinny 2: Dawn of Operation Panties, Dood!, which were originally released for PSP, along with downloadable content.

A “Just Desserts Edition” is now available for pre-order at the NIS America Store for $59.99. It includes a copy of the game, collector’s box, “Prinny’s Scrapbook of Memories,” “Prinny’s Awesome Mix,” a “Can I Really Be a Prinny Block?,” and an “Asagi Wars EX Alpha Championship Poster.”

Here is an overview of the collection, via NIS America:

Prinny 1: Can I Really Be the Hero?

Master Etna demands the ultimate dessert, and it is up to a legion of lowly Prinnies to make it! Jump, slash, and combo your way through different stages of the Netherworld, devastate enemies and bosses with special attacks, and encounter both new and familiar faces in this explosive action adventure from the twisted minds behind the Disgaea series!

When the mysterious Phantom Thief steals Master Etna’s panties, the Prinny horde must rise up once again to retrieve them… or suffer the consequences! Slash and Hip Pound your way through chaotic stages full of devilish foes, and build up the Combo Gauge to unleash powerful moves like Prinny Cyclone and Prinnykaze. Also, dive into the bonus story of the OTHER protagonist(?) of the Disgaea games and claim your glory with Asagi Wars: Vengeance of Asagi!

Key Features Two in One…and More! – Two action-packed chapters of Prinny’s rise to become a hero, plus an expansive post-game chapter featuring… Asagi!?… Who was that again?

The Netherworld, Only Better – All the dark comedy and explosive action you love from the Disgaea series, now with newly remastered graphics.

Watch the announcement trailer below.

Prinnies are cool but I wish there were more from the trio in this. Laharl, Flonne, and Etna, that is.