Now it’s finally out of beta and available for users in North America and Europe.

NVIDIA’s GeForce Now game streaming service is a little different from the rivals. NVIDIA isn’t trying to sell you games… just the streaming technology that lets you play them on any supported device.

Here’s how that works — GeForce Now is compatible with Steam, Epic, UPlay, and Battle.net. Already own a compatible game? Then you can sign up for a GeForce Now account and stream that game to your Windows or Mac computer, an NVIDIA Shield device, or an Android phone.

It doesn’t matter what the specs of your phone or laptop are, because all the processing is done on remote servers. All you need is a fast internet connection with low latency. NVIDIA recommends 50 Mbps or higher for the best experience, although the minimum requirement is just 15 Mbps.

If you’re not sure your existing WiFi router is up to the job, NVIDIA has a list of hardware recommendations including routers and gamepads (which are encouraged for mobile gamers who want to stream to an Android phone or tablet).

NVIDIA plans to add support for Chromebooks later this year, but there are currently no plans to support iPhones or iPads.

One thing that’s always felt risky about game streaming platforms is that your game collection is tied to the service you’re using. If you stop paying for Stadia, for example, you lose access to any games you may have purchase. And the same is true if Google pulls the plug on Stadia at some point… which is something some folks expect to happen within the next few years, given Google’s habit of killing off underperforming products.

GeForce Now sidesteps that issue, because you’re not buying games from NVIDIA. Any game you buy from Steam, for example, will remain in your Steam library even if you cancel your GeForce Now subscription or NVIDIA pulls the plug on the service. You’ll still be able to play on local devices… you just may not be able to stream the games over the internet.

That said, it’s worth noting that not every PC game is compatible with GeForce Now. According to NVIDIA there are “more than 1,000 games” that are supported.

On the bright side, even if you don’t already have an extensive game library, NVIDIA notes that there are 30+ free to play games available including Fortnite.

And while some other services promise 4K gaming, NVIDIA GeForce Now tops out at 1080p resolution and 60 frames per second. But the pricing and feature set is rather competitive.

So how much does this cost? It depends.

At launch there are two pricing options:

Free users can game for up to 1 hour at a time. NVIDIA will kick you off the server at the end of that hour and depending on how many folks are trying to access the company’s servers, you may have to wait a little while to reconnect and keep gaming.

Pay for a subscription and you can play for up to 6 hours during a session and when you want to reconnect, you’ll get priority access. The paid subscription also includes support for NVIDIA RTX ray-tracing graphics.

While NVIDIA says the $4.99/month price is good for the first 12 months, the company hasn’t said how much a paid subscription will cost after the launch promotion ends.

I might even try it! Some of my PC collection could be compatible.

Can I use mods?

If not then this is a non starter for me.

Nope. No ownership, no thanks.

You own everything in Nvidia. You bu y via Steam, Epic, Blizzard store or whatever and just use them as a middle man to stream to most devices.

At least someone read the OP

Sounds like a good deal for what it is.

Unfortunately it had strict bandwidth requirements when I tried it in Beta.

I get around 75mbit download speed, for some reason to Nvidia's servers I only get ~30-35mbit. Apparently this isn't enough for 1080p streaming in their opinion so I was locked to 720p. It needs configurable bitrate.

Edit: Still have it installed from Beta so I gave the test another run to see if it's improved. Nope, still locking me to 720p with a 38mbit connection to their servers. 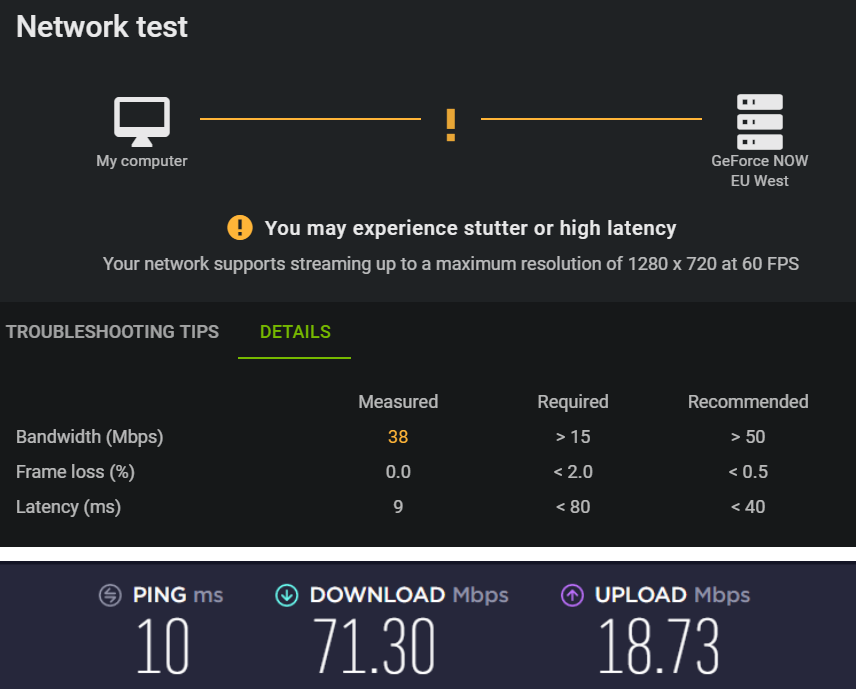 Latency of 9ms is great for cloud gaming, but 38mbit not being enough for above 720p@60fps is crazy, and I should be getting more than 38mbit anyway.

It looks decent for streaming. I'm still not interested in it, but it does look much better than Stadia. The safety of owning things in Steam alone is much more reassuring than Stadia's "pay us twice for access to things you still don't get to own" attitude.

What is the lag like in comparison with Steam Link, Stadia, and wireless HDMI?

I've yet to do one that doesn't have noticeable lag issues. Both Wireless HDMI and wired HDMI also have connections broken (cannot find source) despite the cables still being intact for me.