Forums - Sales Discussion - Playstation fans are the most brand loyal fan according to research, follow with Xbox fan, Nintendo and PC 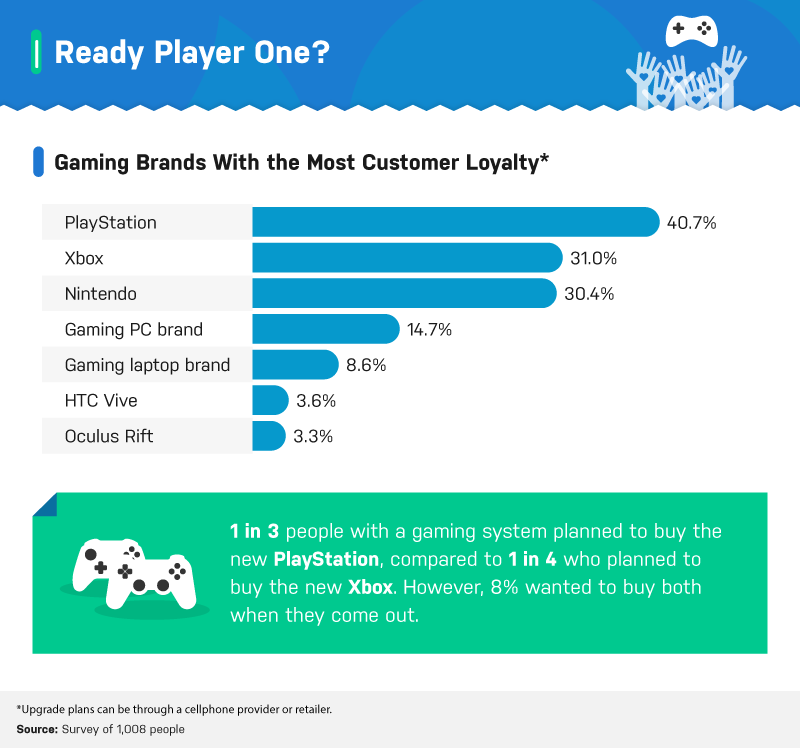 "Sony’s PlayStation and its four (soon to be five) iterations claimed the most dedicated customers, followed by Xbox and Nintendo, respectively. But just as fans can be loyal to a particular game console, they also hold strong allegiance to game franchises that might be unique to particular gaming systems."

" 40.7% of the people survey chose the PlayStation brand, which was followed by Xbox at 31.0% and Nintendo at 30.4%. Gaming PC and gaming laptop were separate entities with 14.7% and 8.6&, respectively. It seems that Google Stadia didn't make the cut. The study also determined that one in three of the people surveyed said they were interested in purchasing the PlayStation 5, while 1 in 4 were interested in the Xbox Series X.

Sony managed to gain a stranglehold on the market by combining their systems with entertainment units, such as how the original PlayStation could play CDs and the PlayStation 2 could play DVDs. There are now a ton of different ways to consume media in the modern age, but Sony managed to grow a loyal fanbase in the decades since the release of the original PlayStation and they continue to stand by the system into its fifth iteration."

If PS5 launching without problem, PS5 could have more sales then PS4

I blame the fact that third parties can't support the Switch even if their business depended on them doing so.

Keyword "planned", I plan stuff all the time, barely ever go through with them.

Of course, Sony consoles are reliable, have a giant library with a lot of quality games distributed in a wide variety of genres that easily appeal to all ages. Its the whole package, its hard to leave behind a product that good. Either way, in every gen since the ps1 I've always had a Playstation and another console (usually from Nintendo) since Ive always felt - In my personal experience - console wars are moronic, you miss on a lot when you marry yourself to a brand/platform.

You should change the headline to:

"according to the 1000 people some asked"

Um, this survey is an abject failure between what it measured and what they are stating.

That doesn't mean "brand loyalty". That measures "brand interest". Brand loyalty is retaining the same brand on subsequent purchases. This isn't measuring that. It makes no distinction what brand console you currently or previously gamed on when stating which console brand you intend to purchase next.

That doesn't mean the survey is useless or doesn't hold value (nor is a knock at the people surveyed or their consoles of choice). It's just very irresponsible of the surveyor to label the results as something that they aren't.

As an Xbox fan I have to ask, does Xbox even have fans!? I just like the console but I'm not loyal to them.

Are you saying there should only be one console or that people should buy all the consoles? If the second:

1) Many, if not the vast majority, can't afford multiple.

2) Many can, but don't want to clutter up space with multiple devices, wires, and controller sets (me).