Do you even have vacxin for corona?

@CrazyGamer2017. We'll, you finally did it little buddy. You got that perma-ban you always wanted. I hope you're able to realize your dream of blowing up the universe. Anyway, if you see this, feel free to drop me a line on PSN or youtube.

as the big majority of covid-19 cases are mild it's reasonable to assume that most missed cases also result in a recovery, sth the recoveries vs deaths statistic doesn't address at all

btw while it's true the infection takes a while to kill someone (It seems ~week 3 is the point where a plurality of the deaths happen), recoveries take even longer - which by your own reasoning makes it a flaw in recoveries vs deaths

During the SARS outbreak, there were a significant number of people who were never counted as "recovered" afterwards. I would imagine this number would be far higher for N-Covid considering a lot of milder cases are sent back home to self-quarantine and aren't likely to get tested again unless they need to go back to the hospitals for whatever reason.

Back then in China, total number of cases stopped significantly climbing about 60 days after the beginning of the outbreak; deaths, about two weeks later or 74 days (not shown in graph but that was in the source); but recoveries took another whole month, 104 days, to be properly accounted for. As a consequence of this lag, the death rate continued to climb between day 60 and day 74 before dropping down again as the very late cases continued to recover. 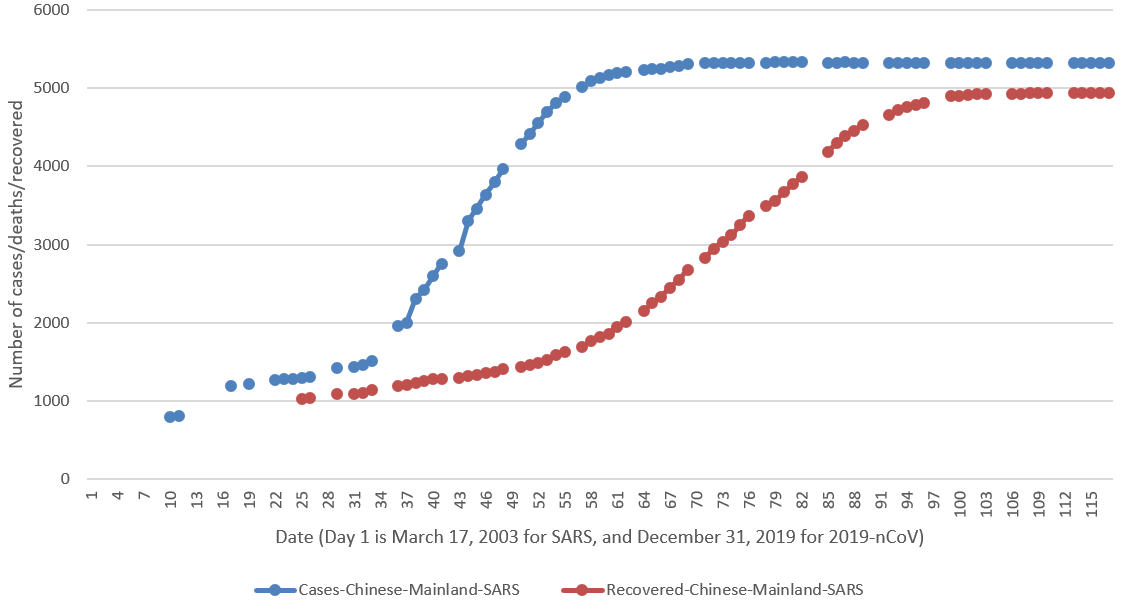 Edit - also significant is looking at the Diamond Princess ship as a controlled environment for the virus without risks of underreporting etc. Mild + assymptomatic cases account for about 95% of all the confirmed infected there (considering 36 severe cases out of ~ 700). Of course, 50% of assymptomatics might be reassuring but is also worrying because of the implications for containment.

There are definitely a lot of undetected cases going about. Since these are virtually indistinguishable from a cold or flu, I don't think we'll never get more than estimates.This isn't a rare phenomenon, since most diseases actually behave this way and their numbers fly under the radar.

However, people with little to no symptoms should have much lower viral loads than the severe cases, so they're also less contagious. Or should be, extrapolating data from similar illnesses.

Edit - other possibilities are that viral tests are actually giving false positives from other, more mild Coronaviruses or, conversely, that the virus itself might be present but it's actually opportunistic Influenza or Streptococcus that's killing all these people. Infectology is complicated...

Some good news. Late, but good.

a similar move was made during the SARS outbreak and the ban was lifted shortly after it died down..

Yeah, I hope this is permanent, but I'm not sure.