Forums - Gaming Discussion - Speculation - 4800H cpu is what next gen consoles will have.

I can imagine next consoles to spend ~35watts of their power budget, on the CPU.
Which I believe a 4800H would be around.

So what does this all mean?
Well console CPUs are about to get pretty beefy. 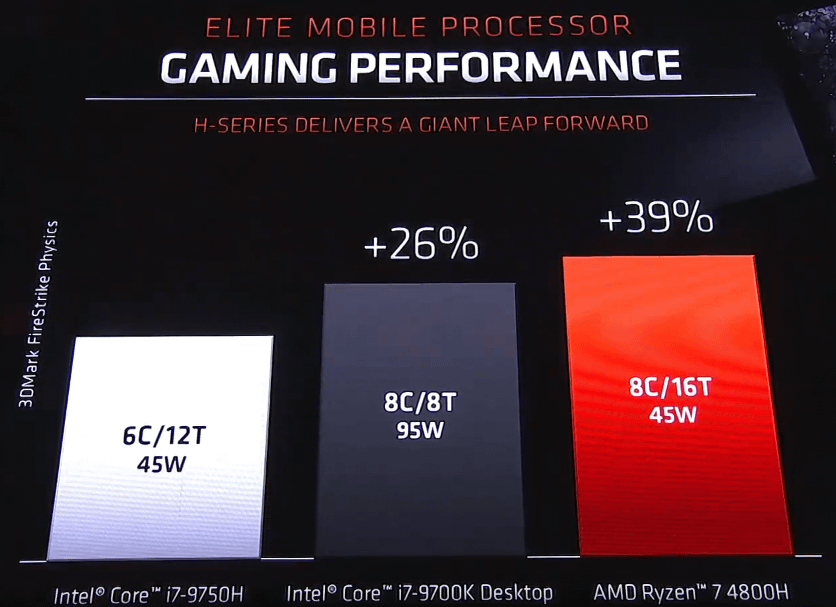 Yes I imagine the 4800H will be the closest PC CPU to the final PS5/XBX cpu. Which means it's going to be a hell of a lot better than that Jaguar CPU was in 2013.

Don't think they are going for a beefy CPU. They rather put the budget on GPU and RAM.

sounds to expensive. SOmething close maybe, but not all cores are the same, even from the same company. SO it having 8c/16t and close clockspeed is not everything. Can make core with half as much transistors.

Im not sure how big the chip is, or how much the iGPU portion takes up.
But Im sure once you cut cache abit, these 8 cores are probably not too big, or costly to have in a console.

Developing a new core, that is only half as big... why?
That stuff is expensive (R&D is crazy expensive), why not just use whats already on market.

These cores are ment for the bigger laptops.
There pretty energy effecient, and probably not overly expensive (im sure you ll see these in laptops that go as low as 600$).
With BoM on laptops being higher than consoles (overall) I dont see why you couldnt use this cpu in a console.

If you have ~140watts to play around with, you dont think they would spend 35watts or so, on the CPU?
Maybe they downclock them a tiny bit, so they dont hit 2.9GHZ under load, and thus use less power.

How much does that CPU cost? Price will obviously drop a bit by the time the Xbox Series X and PS5 launch, and Microsoft and Sony buying them in the millions will get a discount.

Not at all... this is pretty much dead on the CPU in the next-gen consoles. The cache has already been cut down from the equivalent desktop part; basically its been quartered, from 32Mb down to 8MB. It's a 45W chip at full throt meaning at its peak 4.4Ghz clock and with its inbuilt GPU, the next-gen consoles will not be clocked that high ever, and would run at a steady 3Ghz-3.4Ghz range. This means the CPU will pull a max of 30W on its own since they would have their own much beefier GPU.

The finessing you suggest in core design is unreasonable, there is no need for that, as it stands the chip is already well withing thermal and power limits to fit into a console. To put this in perspective, if its  30W chip in next-gen consoles as is, that puts it at a power draw lower than the jaguar cores that are in the current-gen consoles back in 2013. And precedent suggests that both platforms went wth a "laptop" chip then, which is exactly what this chip is now.

They don't eve have ~140W to play with... its more like around ~200W-220W. And that's indicative just by looking the SeX chassis, it's designed that way and that big for a reason. Cooling. That suggests that these next-gen consoles ae likely going to have the biggest cooling solutions we have ever seen in a console thus far, which suggests that clocks and thermals are going to be higher than what we typically would expect. That all translates to more watts.

Another way to look at it, if the PS4/XB1 pushed 170W+ on their cooling solutions back in 2013, what do you think you can expect with a cooling solution twice as big or efficient?

Thinking more on the monetary budget for the console, Sony could do with having to have 10-20W more consumption if needed, but 50USD more would be harder.

Theres no "if you buy them bulk direction from amd, they cost such and such" info anywhere I can find.

So Im not sure, but I think they make alot of sense for a console.
I dont think their as expensive as people here imagine them to be.