So what you're saying is that you prefer the shallow gore and spectacle over the depth and nuance seen in the 2018 edition? That's fine, I love a good hack and slash, but man I can't stand how shallow, boring, and repetitive the combat is in the original trilogy. Plus I hate Kratos in those games, he's probably my single most hated character in all of gaming.

I haven't counted, but from reading through the thread, I get the distinct impression BOTW is the popular choice here.

Super Mario Galaxy 2. Controls perfectly, excellent level design, and constant novelty. It's amazing how many fun and unique ways they find to utilize Mario's fairly basic move set. Whenever I think of replaying a game in my collection, there's always that feeling of "yeah but do I really want to go through *that* part again? Nothing like that in Galaxy 2 (besides like the two fluzzard levels). Good to the last drop. I deal with depression and sometimes I really don't find joy in doing anything, and when that happens I'll often pop in Mario Galaxy 1 or 2.

Also, Kid Icarus Uprising. There are relatively few games that you can say really aren't like anything else. This is one of them. Would love a sequel with more effort put into the multiplayer modes.

Legend of Zelda Skyward Sword- If someone asks me what my favorite Zelda game is, it's generally the last one I played, which is Skyward Sword at the moment. And with all the BOTW in here, I had to give Skyward Sword some love. BOTW does a lot of things incredibly well. The overworld and the sense of freedom and discovery, the things that Skyward Sword is pretty weak in. But in terms of the dungeons, boss battles, combat, and Link's arsenal (areas where BOTW is not as strong), Skyward Sword is the best in the series. If a future Zelda game can put those pieces together, it could be the best game of all time.

Spider-man- As one of the only two games I've ever bothered to get all of the achievements for, I feel obligated to mention this one. A big part of my enjoyment is due to my predisposition as a huge Spider-man fan, but that's kind of the point of it. To make you feel like your favorite hero. Arkham City is probably a better game objectively, but I want to be Spider-man, not Batman.

Smash Bros Ulitmate- The best iteration of one of my favorite franchises. So many characters that are all fun to use. Overstuffed with content. The music alone is enough for it to qualify.

Mass Effect 2 would be in the running. A great cast of characters, and a great middle chapter to a story... It's just that knowing how it's going to end makes me not really want to play through it anymore. Such a same how it all fell apart in literally the last fifteen minutes of the trilogy.

Dark souls for me since I never played the first one, and also indeed Death stranding. Map design is what makes a game for me and the map in Dark souls as well as Death stranding is amazing. BotW is up at the top as well with its map and freedom to explore it.

I just finished my second play through of Death Stranding. First one was off-line which I prefer. Exploring / surviving the map for 12 hours in a 100km on foot journey at the start of chapter 3 was epic. Off-line I was also in full control of what to build where without any interference of things popping up everywhere. It did take a whole lot longer off-line despite playing it all on easy the first time.

Second time on-line which kept me interested in a full second play through since all the online mechanics were still new to me and all the pre-build stuff does help. The online zip lines were very hit and miss though, popping up from different players, not connecting, dead ends, a different kind of challenge to turn that into a working network. I'm also glad I took all my screenshots the first time without the online mess!

Comparison of my 2 play throughs 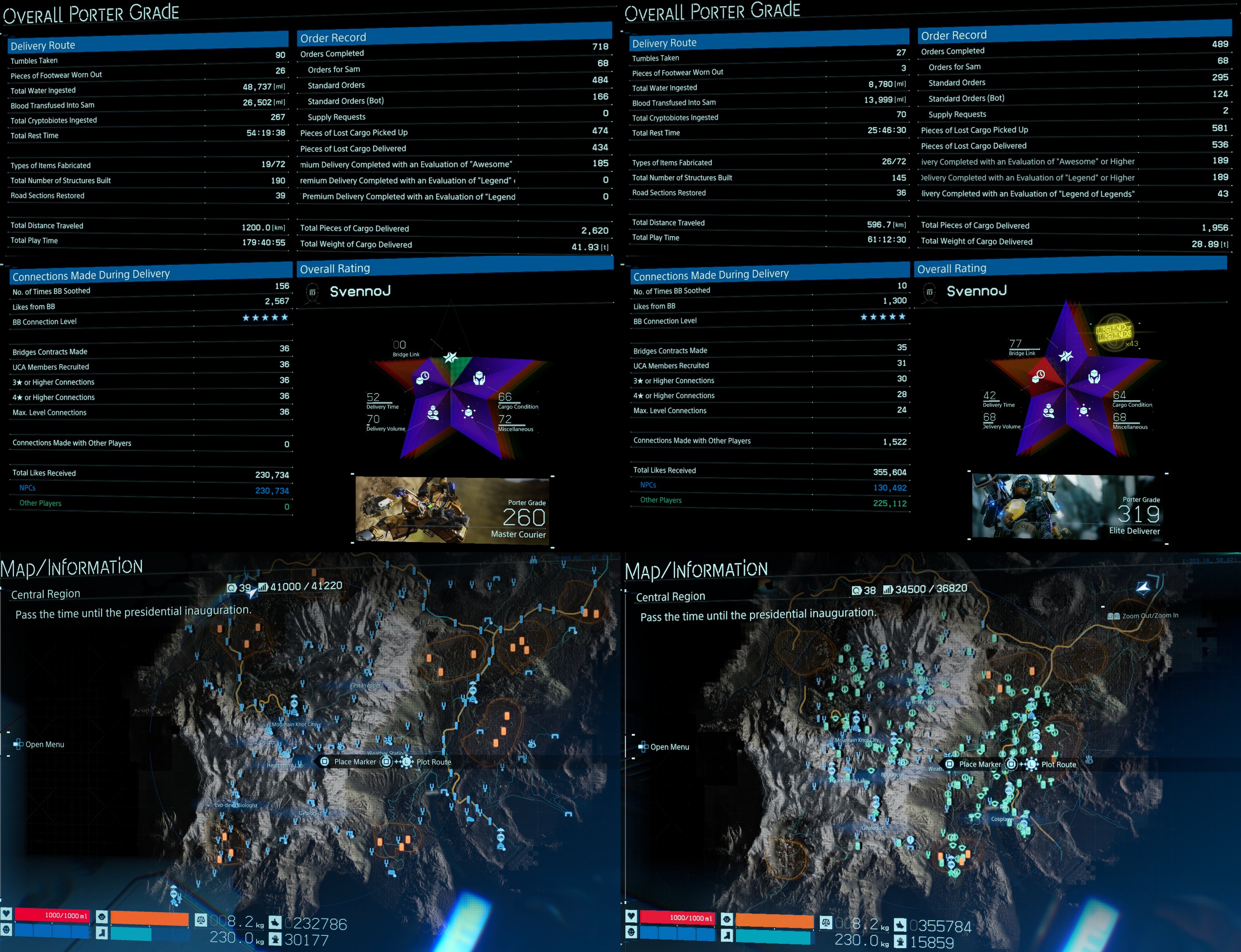 I feel death stranding is an evolved BOTW, when you take it to it's core, the yare both similar games. It;s less about watching cutscenes and story in your face and more about the world, the journey of building and developing and making your way through. I think what made botw special, wasn't the dungeons, which were simple, or the limited boss fights ,again simplistic, or limited enemies, but the open world style freedom and exploration and navigating through and a sense of wonder and awe. I feel death stranding took it up a notch in terms of number of "awe" moments, and the building of tools, progession of it all and the ways to navigate and overcome obstacles was even more breathtaking. There are so many mechanics to Death stranding, that even after 200 hrs i can still be amazed b ythe little details.

Dark Souls. Nothing this decade has been as influential. From Hollow Knight to Fallen Order, I believe we're only beginning to see the full breadth of titles that will draw heavily from Miyazaki's genius.

On the other hand... holy shit, how Skyrim and the other Bethesda games are aging poorly amid Breath of the WIld, Death Stranding and even Rockstar's open world games.

From my list, Nioh. Though League of Legends is much higher playtime throughout the last decade, it was released in 2009.