Forums - Nintendo Discussion - I am thinking about buying a switch...

You're certainly correct that we haven't had enough time to see the extent of it.  But, the fact that it is happening in nearly brand new units doesn't.  There is enough evidence that it is still occuring, and that's it's basically the same issue, for the lawyers to lump it into the big lawsuit.

Of course, lawyers want to lump in anything they can.  But, they certainly aren't making it up out of thin air.  Doing that could seriously screw up the entire case, which is not a risk that would be taken.

Is it strictly a wear and tear issue though? My worst experience with drift happened with the Xbox 360. I had 3 new controllers, in a row, drift right out of the box. It was maddening, and there was no 4th controller. Part of the reason I traded in my 360. LOTS went wrong all at once, but not being able to play without drift....aaaaaiiiieeeeee!

I would personally recommend getting the original Switch model. Best of both worlds. I would also recommend getting a Pro controller. It is honestly the most comfortable controller I've used since the Gamecube! I haven't had any drifting issues with my two pairs of joy cons as of yet, but I only use them for party games and I only play certain types of games (mainly turn based RPGs) that do not require much action or precision with the control sticks.

As for games, it sounds like you are burnt out on open world type games (I could be wrong), but if that's the case I would recommend Super Mario Odyssey, DK Tropical Freeze, Mario + Rabbids, Mario Kart, Smash Bros, Octopath Traveller, Xenoblade Chronicles 2, Fire Emblem Three Houses, Zelda Link's Awakening.

I have yet to play Astral Chain, but that looks promising as well, same with Luigi's Mansion 3 and Pokemon. I actually recommend Let's Go if you are in to Pokemon.

Switch has tons to offer, and I think that it still has (at least) 3 more years of life left in it before a Switch 2.

It's a great console, I even have two of them. Awesome homebrew support aswell if you're into that. It's like the psp 2.0 can run all sorts of emulators on there.

I'm assuming this case is lawyer driven for their own profit motive as I doubt any benefit for the customer will come out of it that's not already supplied by Nintendo's free repair, as for the Lite I don't think those few cases of drift is wear and tear as its on new units, it's more just regular manufacturing faults that Nintendo will fix free anyway

Right.  And, that's the problem.  Nintendo knows there's a problem, yet they continue to sell hardware with the problem included.

I'm with you. That is kind of sketchy. They should have designed the thumbsticks differently for the Lite while working on a fix for the original joycons. 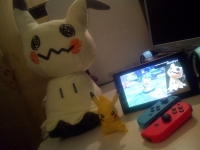 Like you, I'm in the same situation. A few months ago I bought PS4 and just ended Detroit Become Human. Other games like Nier Automata, Horizon Zero Dawn or Uncharted, I didn't even start them or soon after stopped playing them.

On Switch, instead, usually the games are able to catch me most. An example could be Asphalt 9... I downloaded a few days ago and got over 15 hours played. Other examples are Luigi's Mansion 3, Pokémon and Animal Crossing. I can't wait to play them, while on PS4 I'm waiting just Death Stranding I'll buy when it'll on sale.

Is nintendo shop any good?

No. It's disorganized and if you are hoping to browse it to find interesting games than good luck. It does have sections for Deals, New Releases, Best Selling and Upcoming releases which can help, but it's not laid out great.

Does it have deals often? Every month like psn ? All those games i mentioned costed tops 40 euros most of them way cheaper. Does nintendo shops makes deals for the best games like lets say zelda. once in a while? i dont know wbout your country but in here zelda is still like 60 euros wtf xD, they are more expensive than other games and they just dont drop price.

Once in a while yes, but not often. Nintendo games tend to stay at $60 for a long while. Typically they do sales for Christmas, Summer, E3, and your Birthday if your a member. I think the third parties do sales more often. Other folks may have a better answer.

How many years of life does the switch still have?

Nintendo president Tatsumi Kimishima has reportedly stated to Japanese newspaper Nikkei, as translated by Nintendo Soup, that he wants to carry on selling the Switch for more than just the five or six-year average of most consoles. Apparently, the Switch could be supported for up to seven to 10 years, although there’s no detail on exactly how that would work.

Keep in mind companies say this stuff a lot (Sony said the PS3 was to be a 10 year console). Nintendo typically does 6 year consoles though this varies for the handhelds (3DS was 7). So low 6, more likely 7.

do i need to buy memory card first? I will probably just play pokemon until ff7 remake, last of us 2 and cyberpunk ,after finishing these then i will probably play zelda botw , after that i dont know.

No. Switch has internal memory. You'll only need an SD if you plan to have everything digitally. If you use carts you should be fine for a good while. I did eventually have to get one about 2 years in because I had a lot of eShop games.

Do i need to pay online subcription to play pokemon online?

Best answer: A Nintendo Switch Online subscription is not mandatory for Pokemon Sword & Shield, but it is beneficial to have one - you won't be able to trade Pokemon or battle online without it.

Switch Online is 20 bucks for a year. You get cloud saves with it too so I personally think its worth it for that alone.

Id say Switch is a good buy if you want Nintendo's line-up of games and you want a portable system. I have it docked most of the time but it's easy to bring to a friend's house or on flights (I enjoy traveling a lot). A lot of solid exclusives.

Get it - don’t think about it. The game prices are a problem though because they rarely drop. Zelda that you mentioned is still full price almost everywhere. But you can find a moment to get it at half of it’s price when there are some deals at retailers. I was lucky enough to catch such moment. SD card is required if you want to buy games from eshop. If not, I would still advise you to buy at least 64GB card. As for lifespan, Switch still has at least 3 years to be a relevant platform on the marketing, most likely even more than that.